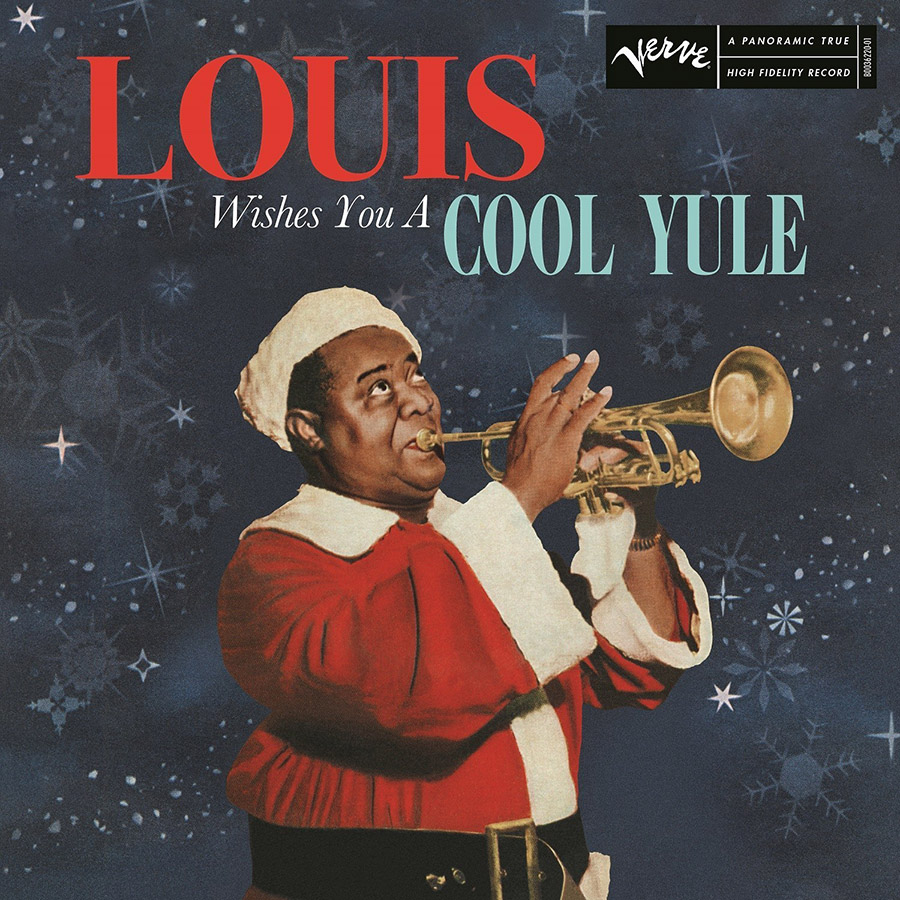 Much like Santa Claus himself, Louis “Satchmo” Armstrong devoted his life to “the cause of happiness,” as he once put it, bringing joy to audiences around the globe every time he put his trumpet to his lips or crooned with his instantly-recognizable, gravelly voice. Yet, while Satchmo’s holiday recordings have become standard yuletide fare, he never released a Christmas album during his lifetime. Now, for the very first time, Louis Wishes You A Cool Yule – out October 28 via Verve Records/UMe, presents Armstrong’s holiday recordings as a cohesive body of work, marking his first-ever official Christmas album.

Since his passing in 1971, Armstrong has become one of the most oft-played artists during the holiday season, his golden trumpet tone still able to cut through the din of even the most bustling shopping mall. Available for pre-order today, Louis Wishes You A Cool Yule features nearly the entirety of Armstrong’s holiday output: six Decca singles from the ’50s, including “Cool Yule,” “Christmas Night in Harlem,” and the swinging “‘Zat You Santa Claus?.” The 11-track album also features duets with two of Pops’ favorite vocal partners, Velma Middleton (“Baby, It’s Cold Outside”) and Ella Fitzgerald (“I’ve Got My Love to Keep Me Warm”). An official video for the Louis and Ella classic debuts today, hand-drawn by director and animator JonJon in his distinctive “line and shape” style.

Rounding out the collection is the artist’s signature hit, “What a Wonderful World,” which has become something of a yearlong hymn of hope and celebrates its 65th anniversary this year, plus a very special gift to fans: a previously unreleased reading of Samuel Clement Moore‘s poem “A Visit from St. Nicholas,” popularly known as “The Night Before Christmas.” Paired with a groovy, newly-recorded musical underbed by New Orleans pianist Sullivan Fortner, the poignant recording marks the first new Louis Armstrong track in more than 20 years and is notable for being the last recording he ever made.

Louis Wishes You A Cool Yule will be available in a variety of formats, including on red vinyl, a limited edition vinyl picture disc (releasing November 4th), CD, and digital. The album will feature new liner notes from GRAMMY®-Award winning writer, Ricky Riccardi, author of two Armstrong biographies (“Heart Full of Rhythm” and “What a Wonderful World”) and Director of Research Collections for the Louis Armstrong House Museum. Additionally, all 11 tracks have been mixed in immersive Dolby Atmos and hi-res audio.

Since his passing in 1971, Louis Armstrong’s legacy as one of the most beloved and influential jazz artists of all time has only continued to grow, while his enduring catalog of recordings remains timeless. Born in New Orleans, Armstrong (1901-1971) began his career in the ’20s, bringing his Dixieland background to Chicago, New York City, and Los Angeles. By the time he became an internationally-renowned star in the ’40s, the hardworking singer, bandleader, actor, and trumpet player was spending nearly 300 days on tour every year. One constant throughout these shows, however, was the spirit of Christmas.

As a child, Riccardi writes, Armstrong “did not have much time for Christmas… life necessitated that he drop out of school and go to work while still a young boy to help support his mother and sister.” After his marriage to Lucille Wilson, however, the holidays took on a new meaning—particularly when the couple was on the road. Riccardi continues, “With the holidays approaching, Lucille bought a small Christmas tree and set it up in their hotel room. According to Lucille, Louis ‘just looked at it and looked at it and told me, ‘This is the first tree I’ve ever had.’ Louis refused to let Lucille take it down and insisted they take it with them on the rest of the tour. The Armstrongs would continue this tradition, Lucille later remarking that they continued setting up ‘a table tree and holiday fixings in whatever hotel in whatever country we happen to be in.'”

Perhaps, it is that love of Christmas that accounts for Armstrong’s somewhat mysterious reading of “A Visit from St. Nicholas.” Captured months before his death, on February 26, 1971, the recording was made by the ailing artist, alone on his home reel-to-reel tape recorder. Whether Satchmo was giving fans one final present, or simply finding comfort in his favorite holiday, it is certain that the recording, and this album, will deliver plenty of Christmas magic.