#Wow!! The Farmers to Families Food Box Program has distributed more than 75 million food boxes in support of American farmers and families affected by the COVID-19 pandemic. 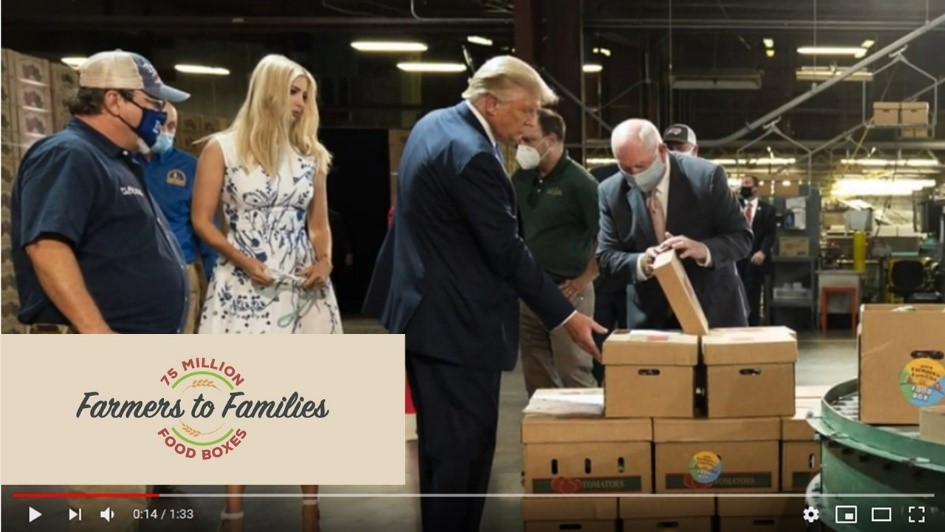 Secretary of Agriculture Sonny Perdue announced last week that the U.S. Department of Agriculture’s (USDA) Farmers to Families Food Box Program has distributed more than 75 million food boxes in support of American farmers and families affected by the COVID-19 pandemic. Earlier this week, President Trump announced an additional up to $1 billion will be added to the Farmers to Families Food Box Program while the economy continues to reopen.

“The delivery of 75 Million food boxes has helped an incredible number of Americans in need,” said Secretary Perdue. “I couldn’t be prouder of the great job done by the food box program staff and the many farmers, distributors and non-profits that helped to get this program off the ground for the American people. Each of these milestones is marked by pride and has required hours of hard work and dedication from USDA employees, farmers, ranchers, distributors and the brave volunteers of countless non-profits going the last mile to reach Americans in need. We are well into the second round of deliveries and we’re working harder than ever to continue to build on the success of the program.”

“In May, under direction from the President, we launched the $3 billion Farmers to Families Food Box program to help feed American families and support our farmers. Just over three months later, the United States has responded in record amounts with over 75 million boxes having been delivered nationwide. This program will continue to fulfill its mission to support the most vulnerable, empower our workforce and uplift great American farmers,” said Advisor to the President Ivanka Trump.

Following the President’s announcement of additional funding up to $1 billion, USDA also announced today it intends to extend current contractors that desire to continue to deliver food boxes through September 18. These extensions will ensure adequate capacity for food box distribution as USDA plans to incorporate the additional funding. USDA continues to review proposals received for the upcoming third round, and will issue additional agreements in the near future, with subsequent contracts to deliver food boxes the remainder of September and through October 31.

In the ongoing second round of purchasing and distribution, which began July 1 and will conclude Aug. 31, 2020, USDA has purchased more than $1.113 billion of food through extended contracts of select vendors from the first round of the program as well as new contracts focused on Opportunity Zones in order to direct food to reach underserved areas, places where either no boxes have yet been delivered, or where boxes are being delivered but where there is additional need.

In the upcoming third round, which begins September 1, USDA plans to purchase combination boxes to ensure all recipient organizations have access to fresh produce, dairy products, fluid milk and meat products. Additional box types will be considered on an as needed basis. Entities that proposed under the previous solicitation, including current vendors, will have to reapply. Proposals will be expected to illustrate how coverage will be provided to areas identified as Opportunity Zones, detail subcontracting agreements, and address the “last mile” delivery of product into the hands of the food insecure population.

The first round of purchases occurred from May 15 through June 30, 2020 and saw more than 35.5 million boxes delivered in the first 45 days.

Updates to the number of food boxes verified as delivered will continue to be displayed on the USDA’s Agricultural Marketing Service (AMS) website, with breakdowns by performance period on the Farmers to Families Food Box Program page.