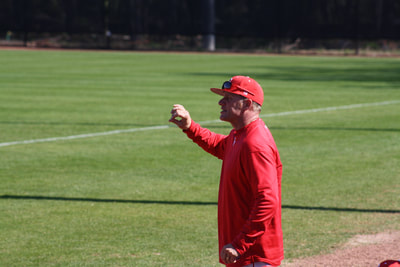 Brunswick, Ga. – The Glynn Academy baseball team put itself in good position to claim a second straight league championship this week by taking two of three games over rival Brunswick High in their Region 2-AAAAAA series.

The Terrors won the decisive third game Thursday night at Brunswick, decking the Pirates 9-2 to clinch the series. Glynn won the opening game at Brunswick 7-0 on Tuesday before the Pirates took the second game on Wednesday by that same 7-0 tally at Wainwright Field.

Glynn, which is ranked second this week by the Georgia Dugout Preview Magazine, is now 18-2 overall and 5-1 in the region.

Brunswick, which started the week ranked eighth, is now 14-8 and 2-3 in the region.

The Terrors opened region play last week with a sweep of Bradwell Institute while the Pirates took two of three games against Richmond Hill which fell to 10th in the rankings after losing the series against Brunswick.

Now halfway through their region schedule, the Terrors sit atop the league standings with just the one loss. Effingham opened region action this week with two wins in three games against Richmond Hill and thus is 2-1 in league play.

The Terrors and Rebels will meet next week for three region games with the first game Monday and the third game Friday to be played in Brunswick with the middle game taking place in Springfield.

Glynn also has three region games remaining against Richmond Hill which is just 2-4 in the league through their opening two series.

Brunswick is now third in the region standings and will face Bradwell three times next week with two games at home. The Tigers did not play any games this past week after losing their first three region contests to Glynn.

The Pirates will close out their region schedule with a three-game set against Effingham.

The following is a recap of the three games this week between the Pirates and Terrors.

The Terrors scored five runs in the first inning before their pitching ace Will Bowdoin even took the hill.

Georgia signee Randon Jernigan led off the game with a single and would steal second and third before scoring on a ground ball off the bat of Bowdoin who reached on a error.

Griffin Bates added a two-run double in the inning and Hill Hartman drove in Bates with a triple to center field. Hartman would ultimately come home on a pitch in the dirt that got away from the Brunswick catcher.

Brunswick loaded the bases in the bottom of the first with two outs, but Bowdoin worked out of the pickle.

Marshall Cox took the loss for the Pirates.

Jernigan and Hunter Hall both had two hits for Glynn.

Hunter Goff had two hits for the Pirates.

The Pirates bounced back Wednesday night behind the pitching of senior Harrison Trawick who stymied the Terrors while handing them their first loss at the new Wainwright Field.

Trawick pitched a complete game for the Pirates. He gave up just three hits and struck out nine while holding the Terrors scoreless.

Hartman gave Glynn a strong effort on the mound through four innings as he kept the Pirates off the scoreboard while striking out three and allowing just four base runners.

The Pirates, though, would open up the game in the fifth after their lead-off batter in the inning reached on an error and would score on a double down the right field line by Anthony Cleveland.

Trawick would drive in Cleveland with a single for a 2-0 lead, and after another single by Goff that led to a pitching change by the Terrors, Joe Smith smashed a triple that drove in two more runs. He would score to make it 5-0 on a single by Matthew Trawick.

The Pirates added two more runs in the top of the sixth to make for the final. Goff, who had three hits in four at-bats, drove in one of those runs with a triple.

Harrison Trawick would hit Jernigan with a pitch to open the bottom of the sixth and Bowdoin followed with a single, but the Brunswick senior hurler retired the next three batters to get out of the inning.

In the seventh, Trawick retired the Terrors in order, striking out the final batter to finish off his impressive mound performance.

The Terrors took the rubber game of the series which was played at Brunswick.

Glynn got a strong performance from starting pitcher Paul Hegeman who worked six innings and allowed just three hits while striking out six and walking one.

The sophomore held the Pirates scoreless through the first five innings before giving up two runs in the sixth. Only one of those was an earned run.

Hegeman helped his own cause at the plate, breaking out of a slump with a 2-for-2 night that included three RBIs. He also drew a walk.

Glynn scored twice in the top of the first, their first run coming home on a double by Hegeman. The second run scored after an error and a passed ball.

The Terrors scored two more runs in the fifth for a 4-0 lead. Jernigan was hit by a pitch and Bowdoin reached on an error before Hegeman drove home both players with a single through the middle. Hartman drove in another Glynn run for a 5-0 cushion.

The Terrors would score four more runs in the sixth. Hunter Hall plated two with a bloop hit into shallow right. Bates brought home a run with a bunt-single and a Brunswick error led to the final run.

The Pirates avoided the shutout by scoring two runs with two outs in the bottom of the sixth. Hegeman had retired 15 in a row before the Pirates scored with two hits, a walk and a Glynn error.

The third game was originally scheduled for Friday but it was moved up a day due to the threat of rain to start the weekend.

The teams ended up playing three games in three days as the opening game was postponed a day due to inclement weather at the start of the week.