Pirates rally and win in thrilling fashion, but Terrors take one on chin at Ware 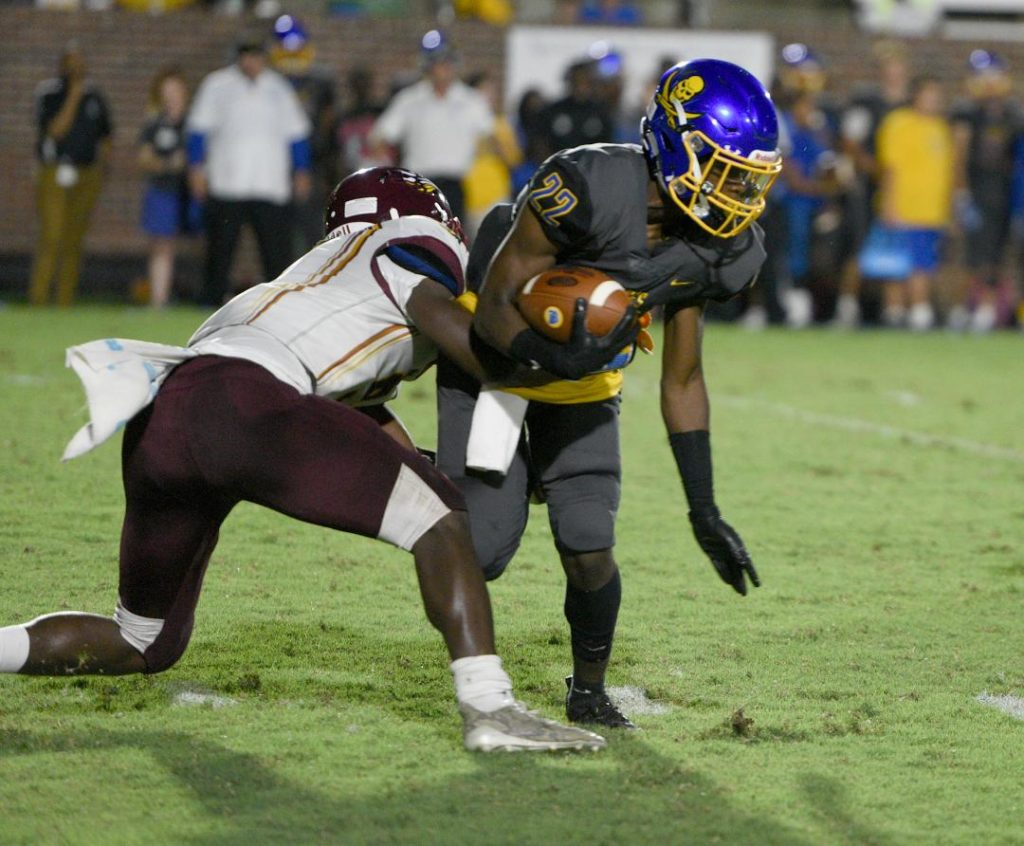 A week after getting thumped 37-0 by Camden County at Glynn County Stadium, it looked like the Brunswick Pirates might suffer another big defeat on their home field just seven days later.

But after trailing 21-0 less than four minutes into the second quarter, the Pirates came off the mat to outscore New Hampstead 31-6 over the rest of the game including 12-0 in the fourth quarter to produce a thrilling 31-27 victory Friday night in a game that literally wasn’t decided until the final horn.

“The kids played with a lot of heart. This could be a turning point for us,” said Brunswick coach Sean Pender after getting hugs and hand shakes from excited fans on the field following the game.

The come-from-behind win lifts the Pirates to 2-3 for the season, and they will have the chance to even their record at 3-3 next week when they host Monroe-Albany for the annual Homecoming game.

Brunswick never led until Che Foy put the home team ahead with his determined effort to get into the end zone for the go-ahead score with 12 seconds to play.

Foy caught a pass from quarterback KJ Lee along the Brunswick sideline around the 5-yard line. The junior receiver would leap over a defender who tried to knock him off his feet and then dove into the right corner of the end zone to complete the 18-yard scoring play for the Pirates.

“I just kept my feet moving and scored,” Foy said of his game-winning play.

The scoring play capped an 88-yard drive by the Pirates who got the ball at their own 12-yard line with 1:48 to play following a stand by the BHS defense after the Phoenix drove deep inside the Pirates’ territory.

New Hampstead gained 3 yards on first down to the BHS 10, fumbled the ball on second down, and dropped a would-be touchdown pass on third down before Brunswick’s Octavis Butler stopped New Hampstead quarterback Deyandre Ruffin for a yard loss on fourth down to get the ball back to the BHS offense one last time.

The Pirates would cover the distance in seven plays while using two of their three timeouts, taking the lead for the first time all night when Foy dove for the pylon to make for winning score.

“I felt pretty confident,” said Lee who directed the Pirates’ scoring drive. “We just ran the two-minute drill and we ran it to perfection.”

The Pirates, of course, still had to kick off to the Phoenix who got a return from all the way to the Brunswick 44 from Justin McKitchen who had a huge night catching the ball for the visitors.

With two seconds left and one play remaining, the Phoenix threw a Hail Mary pass toward the BHS end zone which was swatted down by Freddy Towns to preserve the victory for the Pirates.

New Hampstead, which competes in Class 5A, fell to 3-2 with the loss.

The Phoenix scored the game’s first three touchdowns. Ruffin hit McKitchin for a 33-yard score on a third-and-26 play for the game’s first touchdown in the opening quarter. Just moments into the second quarter, Dontre Wallace ran 2 yards for the team’s second score which finished off a 58-yard drive.

Less than four minutes later, Ruffin and McKitchen teamed up again for a 63-yard catch-and-run touchdown play that made it 21-0.

Lee, who had started the first four games at quarterback for the Pirates, came off the bench in this one to ignite a sputtering BHS offense which was trying to play at a faster pace this week but couldn’t move the chains early on.

The sophomore signal-caller led the Pirates on a 64-yard drive for their first score of the game which came on a 2-yard run by Foy. Lee converted a fourth-and-13 pass to Jaylen Trimmings on the previous play to set up the score.

The Phoenix would drop a would-be touchdown pass late in the second period before giving the ball back to BHS near midfield. BHS would cover the 61 yards to pull within 21-13 at intermission on a 10-yard pass from Lee to Xavier Bean.

In the third quarter, BHS scored to make it a 21-19 game with 4:03 left in the quarter on a 2-yard run by Trimmings following his 12-yard gain on the previous play. Brunswick’s two-point try failed.

New Hampstead quickly answered, however, when Ruffin unleashed a pass to McKitchen on a fly pattern that went for a 90-yard score to make it 27-19.

Brunswick kept fighting, though, and would go 51 yards in eight plays to score on a 2-yard keeper by Lee with 8:34 remaining in the game that got BHS back within 27-25. Again, the Pirates misfired on their two-point conversion attempt to tie the game.

With New Hampstead trying to milk the clock on its next possession, the BHS defense would give up a 21-yard pass for a first down on a third-and-17 play that gave the visitors a new set of downs at the BHS 44. After a pass to the goal line was nullified by a penalty against the visitors, Ruffin would scramble 37 yards to the BHS 13 with just under three minutes to play.

That’s when the Pirates hunker downed and got the ball back to their offense which went on the long march and got the game-winning score with 12 seconds to spare.

“We kept our heads up and kept the faith,” Foy said. “We talked about faith at the pregame meal. We kept the faith, executed our plays and won the game.”

That they did, and it ended up being Brunswick’s fast-paced offense that made the difference for the Pirates.

“It wasn’t looking good early, but they were gassed at the end of the game,” Pender said. “KJ came in and did a fantastic job. He didn’t make very many mistakes and extended plays with his legs and made some great throws. They were keeping everything in front of them, so he had to make accurate mid-range throws. He’s struggled with that, but he did a good job tonight.

“We knew what adjustments we wanted to make offensively at halftime, and we made some adjustments with personnel and mixed things up in the middle of the field defensively so their quarterback just couldn’t sit back there and read us the rest of the game.”

Also on Friday night, Glynn Academy lost to Ware County in the only other game involving a Glynn County team as Frederica Academy had an open date this week. The Glynn game recap is below.

Glynn has had Ware’s number in recent years, winning the last four games in this rivalry matchup which has become a heated affair since Rocky Hildago took over the GA program and Franklin Stephens became head coach of the Gators in the 2014 season.

The Red Terrors lost the 2014 game to the Gators but won the next four meetings including a victory in the 2015 state semifinals at Glynn County Stadium after also knocking off the Gators in the regular-season matchup at Memorial Stadium in Waycross.

But on that same field Friday night, the Terrors (3-2) were no match for the Gators (4-1). The only victory Glynn got this week was a forfeit victory that was awarded to them after Fort Dorchester admitted to playing an ineligible player in the season-opening game that the Patriots actually won over the Terrors.

On Friday, the Gators would score on three straight possessions in the first half for a 19-0 lead at the halftime break.

Ware’s first touchdown came on a 29-yard pass from freshman Thomas Castellanos to Chris Jones midway through the first period.

Castellanos scored on a 11-yard keeper in the final minute of the opening frame to make it 13-0.

Glynn would fumble away the ball on the first play of its next possession which also was the final play of the opening stanza. The Gators would make the turnover hurt as they scored again on another 11-yard run by Castellenos to make it 19-0.

Glynn would return the kickoff to the Ware 30-yard line but would end up punting. And also before the end of the half, the Terrors moved deep inside Gator territory but couldn’t convert a fourth-down play at the 13 and had to surrender the ball on downs.

The Terrors scored their only points midway through the third period on a 3-yard run by quarterback TJ Lewis, but Ware answered that score immediately with an 80-yard touchdown run by Jeremiah O’Hara that would end up being the final score of the game.

“Their kids played harder than our kids and we just didn’t play very well,” said GA coach Rocky Hidalgo. “We missed a lot of tackles, missed a lot of assignments. We moved some kids around on the offensive line due to injuries, and that probably backfired on us. Our execution was horrible.

“We’re not very good right now at being us. We’ve got to fix things and do a better job of being us.”

Ware will play at Lowndes next week while the Terrors will visit Camden County next Friday.