Pirates pressing on while remembering their senior teammate, No. 28 Tae Pierce

A teammate is remembered. 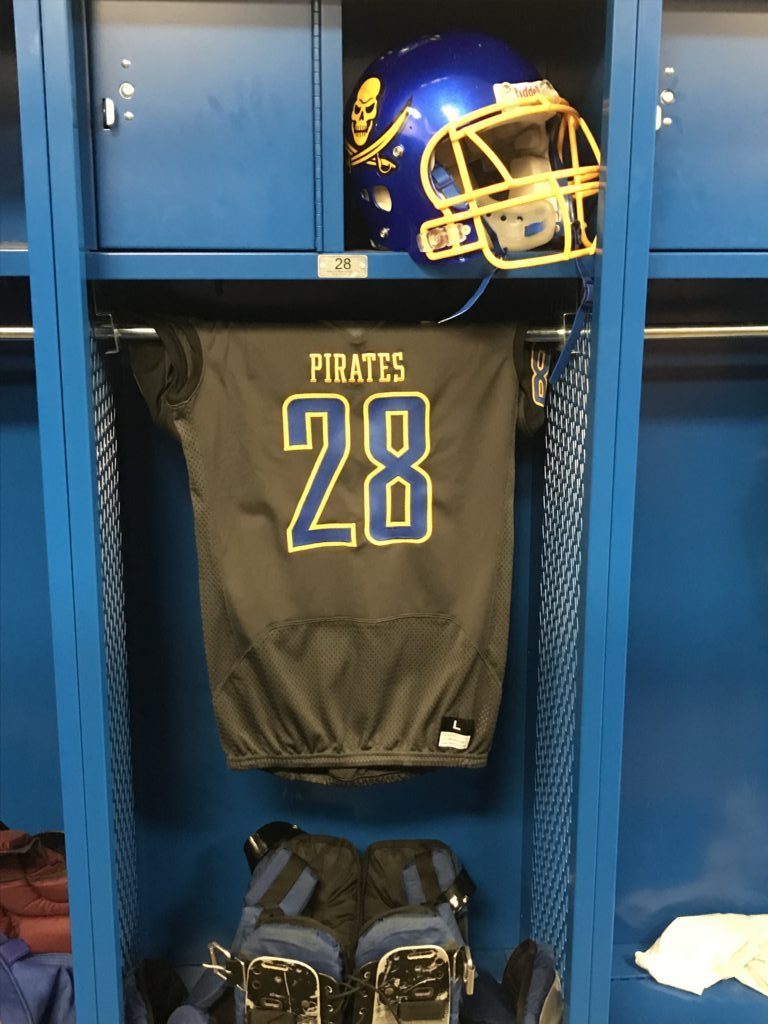 Xantavian Pierce might be gone, but he certainly hasn’t been forgotten by the Brunswick High Pirates football team.

And the BHS players believe their fallen teammate is watching over them from above, day in and day out, from that Big Football Field in the Sky.

In fact, they have proof that he is, according to Demetrius Hardy Jr., who recalled a moment in last Friday’s game at Coffee that he will always remember.

“One of our players, Anthony Scott, made a tackle on one of their players,” Hardy said. “It left a mark on his eye shield in the shape of a T. It was clear as could be, over in the corner of his visor.

“I know he’s with us always, every game and practice.”

Pierce, who everyone knew as “Tae”, was killed in an accidental shooting inside a Brunswick apartment this past March.

He was transported to the local hospital immediately following the incident where he was pronounced dead later that same evening from a gunshot wound to the abdomen.

Provided photo – This plaque was presented to Brunswick coach Sean Pender by the Pierce family.

Pierce was only 17 years old, a kid with a bright future ahead of him as a student-athlete on the next level, likely in football though he was also a key member of the Pirates winning basketball program.

In honor of their teammate, the Pirates continue to make Pierce a part of the football team.

His jersey number – No. 28 – will not be worn by anyone in the program this season.

In Brunswick’s new field house, the locker reserved for No. 28 is still his. His game jersey hangs in its proper place, and on game days, his helmet is put where it is supposed to be, along with his shoulder pads.

On Friday, Pierce’s equipment will be there waiting for him as the Pirates get ready to board the bus for the trip across state lines to play Bartram Trail (Fla.) in their second game of the season.

Unfortunately, Pierce won’t be getting on that bus with his friends and teammates, but he will be with them in spirit as he is never too far away from the thoughts of those Brunswick players who will take the field Friday night.

“He’s a senior on this team,” said Brunswick second-year head coach Sean Pender. “He put in the work to be on this team. The least we could do is hold his spot. His number is his number. His locker is his locker. He deserves all of that.”

News of Pierce’s death that Sunday afternoon quickly made its way through the community and got to his fellow teammates on both the basketball and football teams in a matter of hours.

The next day, the mood as the school was somber.

Pierce’s funeral held several days later in the school gym was attended by fellow students and of course his teammates and coaches as everyone came to celebrate the life of the young man with an infectious smile who was lost way too soon.

His teammates vividly remember not believing this was really happening, just weeks ahead of the team getting ready to take the field for spring practice.

“I was shocked, didn’t believe it at first,” said Brunswick senior Stacy Young who first met Pierce in fifth grade at a local elementary school.

“There was silence at school the next day. Usually, it’s loud, with everyone talking. You didn’t hear anything. The whole school was sad.”

The Pirates lost a great player, said Pender, who was counting on his 6-foot-3, 220-pound linebacker to be a key piece of the team’s rebuilding defense.

But more than that, the coach said, the Pirates lost a piece of their collective heart, and someone others looked up to on and off the field, not just members of the two varsity teams he played on.

“He was a great kid, worked really hard,” Pender said. “He was a competitor. You really saw him growing up, maturing, not only as a player but with his academics also. He was getting serious about things, really turning the corner.

All of that made Pierce’s death especially hard on the Pirates and really the school as a whole, Pender noted.

“Everyone liked him, the student body, teachers, everyone,” the BHS coach said. “He had charisma about him. He was always smiling, always.”

BHS senior running back Jaylen Trimmings was grinning from cheek to cheek this week when he talked about his friend.

“He was a heckuva player. We looked up to him and he treated us like a brother,” he said. “He would just bring a smile to your face. I miss him so much, just being around.”

The same goes for BHS junior defensive back Freddy Towns, one of Pierce’s best friends.

“He treated me like a brother,” Towns said. “If you needed a ride, he’d come get you or find someone who could. He’d do anything he could to help keep us safe.

“He was very friendly. Tae inspired a lot of people. I think about him a lot. I wish he could still be on the field beside me.”

His mother, Charessa Pierce, spoke to a gathering of about 350 classmates and teammates at school the day after the tragic accident involving her son.

“It took a strong women to do that,” Pender said.

She also would speak at his funeral held in the BHS gym, drawing strength, she said, from all of the teenagers in the building who came to pay their respects to her son that they all admired and considered a friend.

Charessa Pierce has had to try and move on with life, and she continues to encourage Tae’s friends to press on and make the most of their lives, too.

After all, that’s what Tae would have wanted, his mother says.

Still wanting to stay close to the Brunswick program, she also regularly goes by the school to drop off food for the players and plans to be in the stands at every game this season. She traveled to Douglas last week for the Coffee game and plans to follow the Pirates to Bartram Trail on Friday night.

“Like I told Coach Pender, these boys are my kids now,” Charessa Pierce says. “I lost Tae, but gained a lot more sons. It’s a salute to him that they all liked him so much. He’d want me to take care of them.”

She is touched by the way the team is remembering her son and felt blessed by the financial support offered to the family by both the football and basketball programs following Tae’s passing.

“It’s very special. It puts a smile on my heart,”  Charessa Pierce said.

The Pirates are playing with heavy hearts this fall, but they get the motivation to play their best knowing that Tae would love to be suiting up and giving it his all on the football field, too.

Tae Pierce is dearly missed, but he will always be remembered, according to his fellow Pirates.

They have dedicated this season to him and hope they can make him proud.

“Regardless of how we do, I know we’d be a better team with him playing,” Hardy Jr. said.

“I’m wearing a shirt under my jersey every game that says R.I.P, Ball in Paradise. It has Tae’s picture on it, the day he was born and the day he died. This season is for him.”