Loves team up for victory in annual golf tournament 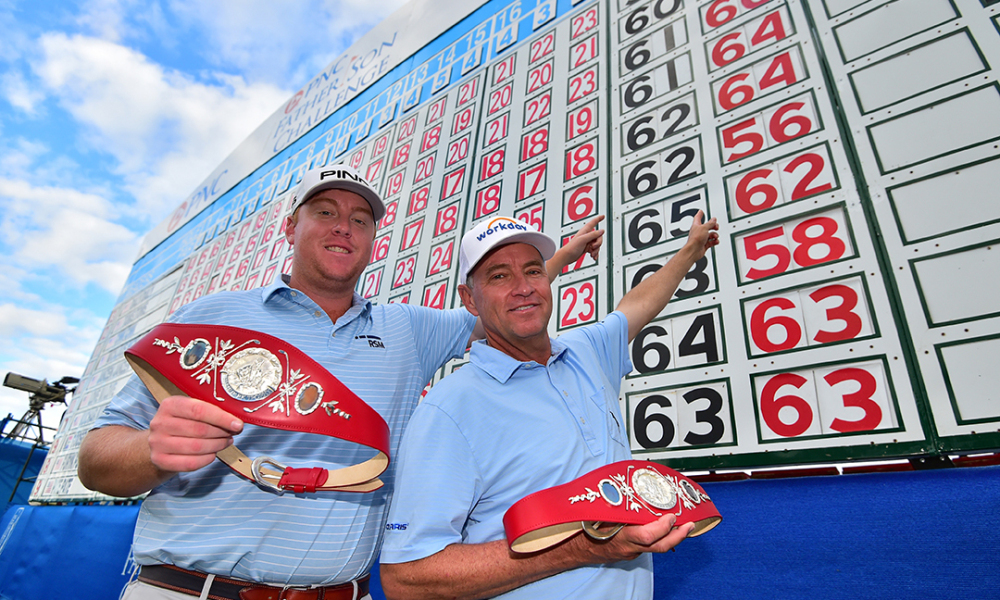 Davis and Dru Love did something on Sunday they have done together one other time in the past.

The Sea Island combination won the PNC Father-Son Challenge, a 36-hole event that was played at the Ritz-Carlton Golf Club in Orlando as part of golf’s so-called silly season.

The Loves teamed up to win their first Father-Son back in 2012, but this time the circumstances were different.

The elder Love is older and has played some of the senior professional circuit even though he still competes  regularly on the PGA Tour.

The son, Dru, is now also a professional who has played several tournaments on the PGA Tour but does not have his official tour card, something he is still trying to earn.

On that note, the Loves could play together as the rules of the tournament stipulate that only one player on the two-man team can be a member of the PGA Tour.

The other teams in the field knew the Loves were the team to beat when the tournament started since they really had two players who compete regularly at the highest levels in golf.

The Loves didn’t dominate the field from start to finish, but they did produce the best-ever tournament by a twosome in the long history of this competition.

Team Love finished the two-day affair with a 26-under-par 118 score which set a new tournament record in the scramble format. The old low mark by a winning team had been a 119 total.

Davis and Dru came from behind for their three-stroke victory in the final round on Sunday. The local tandem shot a 16-under 56 score on the par-72 layout in Orlando which was a new low single-round score in the event.

Their Sunday round featured a 9-under 27 score on the front nine as the Love duo carded an eagle, seven birdies and a par over the opening nine.

They took the solo lead for the first time on the 11th hole with a birdie to reach 20-under. Over their final seven holes, the Loves made four more birdies and another eagle to win by a three-shot margin when their day was done.

John and Little John Daly shot 62 on Sunday and tied for second with Retief and Leo Goosen and Stewart and Connor Cink.

Little John Daly, LJ to those who know him, is 15 years old and carries an 0.9 handicap index as his home course in Florida. He wore Loudmouth shorts on Sunday that matched the trousers won by his father.

Leo Goosen, also 15, plays to an 0.1 handicap on his course in Florida and is a sophomore member of his high school golf team.

For the Loves, this was their ninth appearance in the December tournament. They finished in a tie for ninth in 2005 when they played for the first time and they have not finished outside the top 10 in any appearance since.

This week, the Loves hoped to have one big final hurrah as the hope is for Dru to claim his tour card and thus make himself ineligible to play in the tournament with his dad who is a member of the World Golf Hall of Fame.

“My dad said, ‘let’s finish this one off because hopefully it’s our last one.’ I’m hoping my sister can start practicing so I can come back and caddie for her,” Dru said.

Jack Nicklaus, who played in this year’s tournament with his 16-year-old grandson, joked with Dru that he didn’t need to be in this tournament anymore.

“Get yourself on the PGA Tour,” Nicklaus said to Dru. “I don’t want to see you again at this event.”

Dru has made 14 starts on the big tour. His best finish was a tie for 30th at the 2017 Sanderson Farms Championship.

Last month at the RSM Classic played at Sea Island, Dru tied for 54th and finished ahead of Davis who tied for 65th for just the second time in the 13 events in which both were in the field.

Dru, now 25, has played a total of 17 tournaments on the PGA Tour, Web.Com Tour and European Tour the last two years. He is still pursuing his official Tour card as he missed out in the qualifying tournament this year.

Davis said Dru carried him on the weekend in the Father-Son competition.

“He played great. It was fun to watch him hit so many good shots and make so many putts. I didn’t have to putt much today, which was nice,” Davis said.

In 2019, Dru said he plans to play wherever he can. That means Monday qualifiers, mini-tour tournaments and maybe some time in Europe. Next month, both Davis and Dru will play in the Singapore Open on the Asian Tour.

The victory by the Loves gave the Golden Isles back-to-back winners in team events.