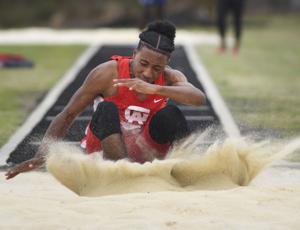 Glynn Academy might not have the depth to compete for the Class 6A team championship this weekend at the state track meet in Carrollton.

But, the Red Terrors will still be looking to bring back some hardware after competing at Grisham Stadium Thursday through Saturday with several individual competitors having a chance to get on the awards podium with a top-eight finish in their respective events.

“We’re gonna try to get a top-10 finish, something like that,” said third-year Glynn coach David Bailey. “It’s gonna be tough, it’ll take a great day for us, but with good days, we have some guys who can compete in and possibly win their events.”

Carrollton is hosting the Class 5A and 6A meets along with the wheelchair competition.

In addition to the Glynn boys, the GA girls will also be represented at the state meet by individual qualifiers as will both the Brunswick High boys and girls teams.

The Glynn boys are led by senior Marvin Dallas who will compete in four events this weekend. Dallas, who is headed to Georgia Military College on a football scholarship, is set to take part in the high jump, 300-meter hurdles, 110 hurdles and also race with Glynn’s 4×400 relay team.

“He’s special. He’s good at whatever he does,” Bailey said. “He qualified in everything he’s doing for us.”

Also Glynn junior Marlon Taylor, a standout defensive lineman for the school’s football team, will have a chance to possibly win the shot-put event. He goes into state as a No. 2 seed with a throw of 50 feet, 6 inches. Taylor finished sixth overall in the event last spring.

GA’s Elijuan Singleton also looks to contend for the title in the triple jump. He is the third seed going into the weekend with a jump of 46-1.

“With a good day, he could do something,” Bailey said.

The Terrors’ 4×400 relay team also hopes to finish on the podium. The lineup features seniors Shaun Bravo and Dallas along with freshmen Jajuan Floyd and Terrance Lewis. The alternates are Quantavious Bostic and Jaiden Miller.

Also for the Terrors, Aldre Jackson will compete in the high jump.

For the Lady Terrors, senior Alivyah Floyd leads the way. She will be among the top competitors in the shot-put and discus throws. She finished third and fourth, respectively, in those events last season. Floyd currently has the third-best throws in the state in both events.

The Pirates will be represented in state by Bashan Wesley who qualified in the long jump and triple jump. He currently has the sixth-best jump among the state qualifiers in the triple with a 46-3.