Glynn wins fifth in a row over rival Pirates, 17-12

The Red Terrors extended their win string to five in a row Friday in the annual City Championship Game at Glynn County Stadium. 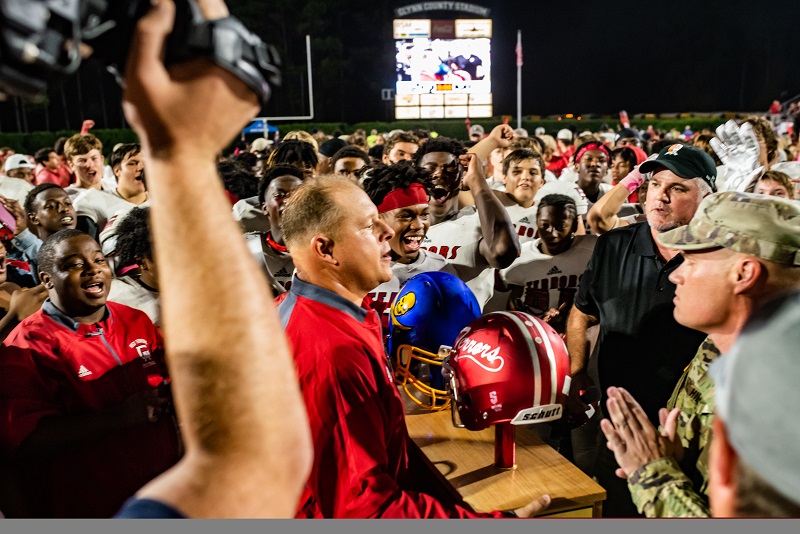 But winning the city crown is nothing new for Glynn and head coach Rocky Hidalgo who has led the Terrors to five straight wins over the Pirates in the annual crosstown showdown since becoming the GA coach in the 2014 season.

Hidalgo, known as Coach Rock on Brunswick’s Southside, called this latest triumph over the Pirates a program win for Glynn.

“What we’ve had is consistency when you really look at it,” Hidalgo said. “I’ve been the head coach here for five years, and they’ve had three different coaches in those five years.

“It’s hard to build something when you keep starting over. (Brunswick head coach Sean Pender) is a good football coach. He does a good job, and their kids played hard tonight. Their fans should be proud of their kids and they should get behind their coaches and support these guys.”

Glynn improved to 5-3 with the victory and 2-0 in Region 2-6A. The Terrors are now in the driver’s seat to claim a fourth straight league title. They close out the season with a home game next week against Effingham and then a road game on Nov. 2 against Bradwell Institute in Hinesville.

The loss dropped the Pirates to 3-6 on the season, and they are now 0-3 in the region. Brunswick must win next week in its season finale at Bradwell to have a chance of making the playoffs as one of the region’s four postseason representatives.

“Our kids played hard tonight,” said a disappointed Pender after the game. “We made some mistakes that hurt us, but as far as effort goes, our kids played as hard as they possibly could.

“We showed up tonight, but this is part of growing up. Our kids didn’t want to lose to Glynn Academy no matter what. After the game, they were hurting, and I told them to think about how they feel. They gave it their all, but we fell short. I told them this is how they should feel any time we lose.

“If we will focus up, play with heart and do our assigments, we’ll win ballgames like this.”

Glynn made history with Friday’s win over the Pirates in the 75th game played between the local schools. They Terrors had won four in a row in the annual series several times including years when the rivals played more than once in a season.

The series started in 1968 after the formation of Brunswick High. The Pirates didn’t win in the first 10 games, but there were two ties in that early stretch when kept Glynn from actually reeling off 10 consecutive wins.

BHS has won as many as six in a row, and Glynn will have the chance to equal that feat next fall when these teams collide again on the gridiron.

On Friday, in front of an estimated crowd of 7,000-plus, both defenses rose to the occasion and gave their teams the chance for victory as the score was just 7-0 in favor of Glynn going into the fourth quarter.

The GA defense held the Pirates to 260 yards for the game while Brunswick also held the Terrors to less than 300 yards.

Both offenses also were stymied by penalties in a game full of flags thrown against both sides. There were a combined 23 penalties for 185 yards for the game.

The Terrors drove 59 yards for a touchdown on the game’s opening possession with sophomore receiver-quarterback TJ Lewis scoring on a 3-yard run for Glynn. Chase Gabriel added the extra-point.

That would be the only score until the fourth quarter which started with Glynn facing a fourth-and-3 play from the Pirates 8-yard line.

Glynn came out of the quarter break in an offensive formation, but called for a timeout before actually snapping the ball. GA would then bring on the field-goal team, and Gabriel booted a 25-yard kick that made it 10-0 just seconds into the final stanza.

Gabriel had missed an attempt from 26 yards in the closing minute of the opening half.

Down two scores, the Pirates turned back the Terrors on their next possession after having to punt themselves when Freddy Towns intercepted a long Glynn pass at the Brunswick 12 on a third-and-11 play from the 46.

The Pirates couldn’t move the ball, however, and had to punt again. Glynn’s Sam Wagner fielded the short kick at the 36 and returned it 10 yards to the 26 with 6:31 to play.

GA appeared to put the game on ice two plays later when Lewis took a handoff around left end and raced into the end zone to give the Terrors a 17-0 cushion following the point-after kick.

But to their credit, the Pirates made a game of it until the end. They would drive 84 yards in 10 plays with KJ Lee hitting a wide-open Xavier Bean for a 28-yard scoring strike with 3:12 to go.

The Pirates would throw what they thought was a lateral and a legal play to senior tackle Warren McClendon for the two-point conversion. But after giving the Pirates the points, the officials had a discussion and ruled the play a forward pass which made it an illegal play by rule. Pender argued with the officials for several minutes after that decision, but they stayed with their call.

Brunswick would then attempt an onside kick and Towns scooped up the loose ball for the Pirates at the GA 36. From there, Brunswick punched the ball into the end zone again when senior running back Jaylen Trimmings scored on a 2-yard run to make the score 17-12 with just 54 seconds left.

The Pirates misfired on their two-point pass play.

Again, the Pirates attempted an onside kick, but this time, the ball didn’t go the necessary 10 yards and that ended the BHS comeback bid.

Glynn quarterback Wagner took a knee twice, and the Terrors starting holding up five fingers as time expired as they made it five in a row in the rivalry matchup.

“Everyone just came together and fought. We played as a team, just unity,” said Glynn senior linebacker Tyshaun Wallace who was named the Glynn County Sports Hall of Fame Player of the Game as he led the GA defense with 11 solo tackles and several assists.

“We’re getting pretty good on defense,” said Hidalgo who saw his unit score on two interception returns last week and also a return after a blocked field goal in their win over Richmond Hill.

For Brunswick, sophomore Octavis Butler led the Pirates with 11 tackles, Devin Lafayette followed with eight and Stacy Young totaled six. Towns had the interception and the kick recovery.

“We executed tonight,” Pender said of the BHS defense. “We knew how to play them, and our kids played hard.”

Both teams showed great character, according to the coaches, in a game which was intense and also chippy at times which tends to be the norm as you might expect in this emotion-filled skirmish every season.

The night started with a fireworks display in pregame and another one after the final horn, and again Glynn went home with the hardware after the hard-fought battle that featured late fireworks on the actual playing field.

“Sometimes, you just have to grit it out and get it done,” Hidalgo said.

♦To see the City Championship trophy presentation and also the Player of the Game announcement, click here.