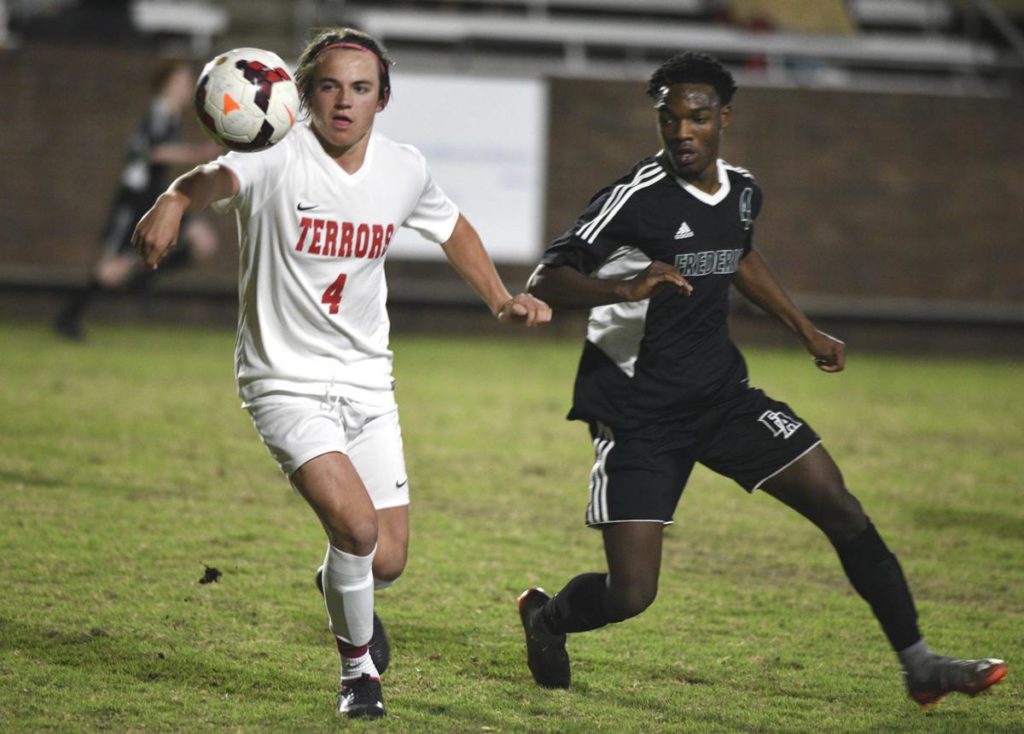 The Georgia High School Association state soccer tournaments begin this week and four local teams will be in action.

The Brunswick High girls will kick things off Tuesday evening when they go to Lee County for a 5 p.m. first-round match.

Three more teams will take the pitch Wednesday as the Brunswick boys visit Valdosta for a 5:30 p.m. contest and the Glynn Academy girls and boys host a 5 p.m. doubleheader against Northside.

The Lady Terrors are ranked first in the state by Max Preps and will take a perfect 18-0 record into the postseason. The team went 8-0 in Region 2-AAAAAA to claim the league championship and earn the No. 1 seed for the state playoffs.

Glynn has posted 13 shutouts on the season including three in a row to end the regular season as the Lady Terrors outscored their final three opponents by a combined 18-0 score.

For the season, the Lady Terrors have allowed just six goals and no more than two in any match. Columbus found the back of the net twice against Glynn in a 4-2 loss to the Lady Terrors back on March 8.

The Lady Terrors are led by goal keeper Bliss Hutchings along with scorers Mady Carroll, Sally Brock and Haley Williams.

Northside is the No. 4 seed from Region 1-AAAAAA. The Eagles enter the playoffs with a 5-11-1 record. They were 1-5 in region games this spring with their lone win being a 3-0 victory over Coffee which did not qualify for the playoffs.

The Eagles have been outscored 72-30 this season.

A Glynn victory in the first round would send the Lady Terrors into the Sweet 16 to face the Mundy’s Mill-Heritage winner.

As for the GA boys, they will bring a 14-2-2 record into the postseason. The Terrors finished 7-1 in Region 2-AAAAAA this season, knocking off Richmond Hill 3-1 last week in their final league game to claim the region title and top seed for the playoffs.

The No. 1 seed guarantees the Terrors at least two home games in the state tournament as long as they win the opening game against Northside, the No. 4 team from Region 1-AAAAAA. The Eagles were 10-8 in the regular season and won just one of their four matches in the region.

“Playing at home is great,” said GA coach Bobby Brockman. “We can stay in our routine and hopefully get some fans out to the game.”

The Terrors outscored region opponents 28-6 and outscored all opponents 59-14 during the season, but Brockman said his team needs to maximize its scoring opportunities in the playoffs as they are usually more limited against the better defensive teams Glynn is bound to face.

The Terrors are led by goal keeper John Henry Butler who made a huge save on a penalty kick last week in the match against Richmond Hill to protect Glynn’s two-goal advantage in the second half.

Other leaders for the Terrors include senior center back Jack Podlesny who has committed to Georgia as a kicker in football, Gray Sasser, Clay Watkins, Alex Hurtado and Truman Antah.

A win by the Terrors in the opening round would send them into round two against the winner of the Lakeside-Forest Park first-round game.

“Our bracket is tough with the possibility of meeting Dalton, the top team in the state, in the quarterfinals,” Brockman noted. “But we obviously need to get by Northside which has a very athletic team, probably the most athletic team we’ve faced all season.”

Both BHS teams will be on the road in the first round as No. 4 seeds.

The Lady Pirates are 5-13 overall and went 2-6 in region games. Three of their wins did come on the road, but Brunswick must find some offense in the postseason to advance as it has been outscored 69-32 for the season.

Brunswick’s opponent, Lee County, won Region 1-AAAAAA to earn a No. 1 seed for the playoffs. The Trojans are 11-6 overall and finished 4-1 in region games. They allowed just two goals in their five region contests.

The BHS boys will go into the playoffs with a 7-8-3 record. They were also 2-6 in region action.

The Pirates are 5-4-3 on the road this season and have been outscored only 30-27 for the season.

Their opponent, Valdosta, is 14-2-1 for the season. The Wildcats finished region action with a perfect 5-0 record. The Wildcats have allowed only eight goals all season.