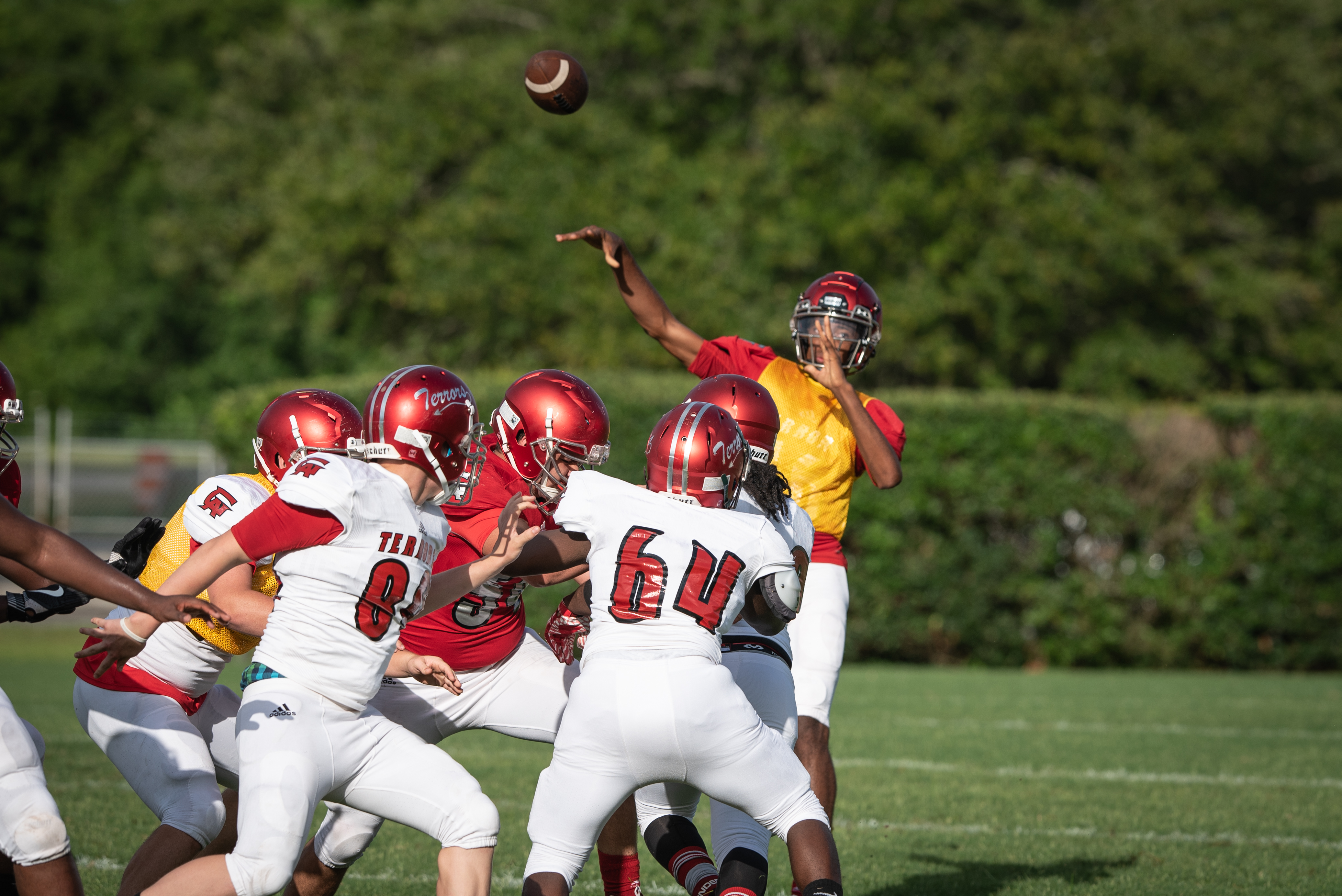 Rocky Hidalgo promised to throw at least two passes Friday night in Glynn Academy’s spring scrimmage in a tweet he posted earlier in the day advertising the game on his personal Twitter account.

Well, the head coach for the Red Terrors delivered on his promise as Glynn actually threw the ball five times in the team’s intrasquad scrimmage at Glynn County Stadium.

And, two of the passes went for touchdowns as sophomore quarterback TJ Lewis hit senior receiver DeAndre Frazier for scoring passes that covered 63 and 70 yards in the scrimmage segments featuring the varsity players.

Lewis actually had a big game for the Terrors who entered the spring looking for a quarterback to replace senior Randon Jernigan who will graduate next week.

The lanky Lewis completed each of his first three passes including those two for touchdowns and also ran for a touchdown from 2 yards out, accounting for three of the varsity touchdowns on the night.

Lewis also engineered a scoring drive by the first-team offense to start the game as the drive covered 75 yards and ate up all but two minutes and 36 seconds of the clock that was set on 10 minutes for the opening segment of the controlled scrimmage.

Hidalgo was impressed by Lewis’ performance, but noted that he did not win the starting job based on his showing in the scrimmage.

Glynn also played fellow sophomore Rayquan Benn at quarterback and Hidalgo liked what he saw from him as well.

“Both had good springs,” Hidalgo said of the sophomore athletes. “We also have (last year’s backup) Sam Wagner and we used him a little bit this spring, but he’s done it. We wanted to see the young kids.

“We gave TJ most of the reps this week and tonight because he missed last week due to the state track meet. We were trying to get him caught up and evaluate things and see where we go. We haven’t made a decision on the quarterback position. We’ll go into June, work hard and sort things out.”

Hidalgo said it’s all but a given that both sophomores, and also Wagner who lined up at receiver in the scrimmage, will be on the field even if they aren’t the starting quarterback.

“Sam’s a big, strong kid who we think can also give us something with his blocking on the perimeter,” the coach pointed out. “TJ played really well tonight, but Rayquan is such a great athlete also. Both are going to play. TJ can play receiver or be in the secondary. Raquan could be in the slot or be in the secondary, too.”

In the varsity scrimmage, Glynn mostly ran its usual option-based offense that included a mixture of straight-ahead running plays, quarterback keepers and pitches to the running backs.

Junior runner Nolan Grant started in the backfield for the Red team on the opening drive, but saw limited carries in the scrimmage.

“We didn’t run him much, but he’s going to be a star,” Hidalgo said of Grant who was one of Glynn’s featured running backs last season. He’s going to run for a lot of yards.”

So might sophomores Caden Hutchinson and Alan Partin who each had some impressive runs in the scrimmage.

Also for the Terrors, senior receiver Quantavious Bostic scored the first touchdown of the night on 10-yard dash after taking a pitch from Lewis.

Later in the scrimmage, Bostic sprinted 68 yards along the left sideline to set up the short scoring run by Lewis.

“He’s gonna get the football,” Hidalgo said of Bostic.

So will Frazier who caught the two touchdown passes and fellow sophomore receiver Jaiden Miller who ran 25 yards for a score on a reverse play, diving inside the pylon to score in the left corner of the end zone.

“Frazier’s had a good spring, and Jaiden is an incredible athlete also,” Hidalgo said. “We have some good skill kids.”

Obviously, several young playmakers were on display in the scrimmage as Glynn looks to reload for a run at a possible third straight region championship and another deep run in the state playoffs.

The team is coming off a season that ended with a disappointing loss to eventual state champion Lee County in the state semifinals last fall.

“We’ve got a lot of work to do, but we have some really talented young kids. They’re just young kids,” Hidalgo said. “They are gonna have to grow up and the only way to do that is get out and there and play on Friday nights.

“We like our kids. It’s just going to take time to develop them, but we’re going to be a good football team.”

Even though Glynn had some big offensive plays in the scrimmage, Hidalgo said he thinks the Terrors have the potential to field a strong defensive team.

The defensive starters were split up between the Red and White squads for the scrimmage. The defense, which couldn’t tackle the quarterbacks to the ground, did stop several plays in the backfield and junior linebacker Chandler Pelkey did recover a fumble for the White team.

“You saw where we couldn’t block (senior defensive lineman and major college prospect) Marlon Taylor a lot of times,” Hidalgo said. “We held some kids out on defense tonight for different reasons. We need to figure out our cornerbacks, but we have some talented kids there. We also have some good young linebackers, and we’ll be better on the line of scrimmage. I think we’ll actually be better on both lines of scrimmage this year.”

And Glynn will also have a strong kicking game if the kicking competition held between scrimmage segments last night is any indication. The highlight of the kicking exhibition was a 59-yard field goal by junior Chase Gabriel.

The Terrors did not punt the ball during the scrimmage nor did they have any live kickoffs.

If there was a noticeable negative takeaway from the scrimmage for the fans sitting in the stands it was likely the three fumbles and two dropped snaps in the varsity action. Only one of those fumbles was lost, however.

Remember, the Terrors lost four straight fumbles in the semifinal loss to Lee County which kept them for playing for the state title instead of the Trojans.

The Terrors will continue to work throughout the summer and are scheduled to scrimmage at Valdosta on Aug. 10.

In other spring football action on Friday night, Brunswick fell 48-20 to Ware County in Waycross.

The Pirates are in rebuilding mode after a seven-win season and a trip to the state playoffs last season under coach Sean Pender who is beginning his second year with team.

The Pirates lost 31 seniors and 13 players who saw significant time on defense a year ago.

In the varsity action, Brunswick scored on a 45-yard pass from sophomore quarterback K.J. Lee to junior receiver Marlon Carmena in the third quarter.

Also on Friday, a Wayne County team that looks poised for a big fall defeated Brantley County 48-14 at Jaycee Stadium in Jesup.

The Yellow Jackets are in their second season under head coach Ken Cribb who guided the team to the Region 2-5A title last season and a berth in the second round of the playoffs.

Brantley County is now under the direction of former Glynn and Frederica Academy assistant Geoff Cannon who took the Class 3A program through spring practice for the first time the last two weeks. The Herons were 1-9 last season.

Camden County did not play a spring game this week. The Wildcats are scheduled to face Charlton County next Tuesday at Chris Gilman Stadium in Kingsland.