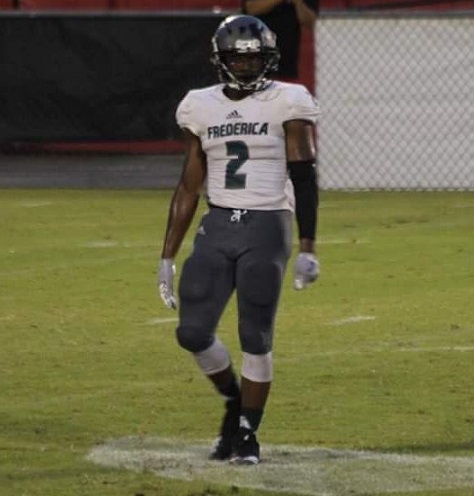 The Frederica Academy Knights’ quest for a state championship has reached the final destination.

The Knights will play for the Class 3A state crown in the Georgia Independent School Association next Friday following their convincing 53-7 victory at Heritage Friday night in the state semifinals.

Frederica (9-3) gets a rematch against John Milledge in the title game after the Trojans knocked off Tiftarea 24-17 in the other semifinal contest held Friday night.

John Milledge (12-0) defeated the Knights 14-13 in overtime on Oct. 26 on St. Simons Island. The state championship game will be played at Mercer University in Macon.

“Our kids have played well in high-stakes football games,” Derrick said. “I feel like we have a good chance to go play and win the state championship. We’ve just got to prepare.”

On Friday night in Newnan, the Knights trailed only briefly against Heritage (9-3) which scored on a long pass play on its first offensive snap of the game and kicked the extra-point for a 7-6 lead.

Frederica also scored on its opening possession on a 25-yard touchdown pass from Jaylin Simpson to Denver Anthony, but the extra-point attempt was blocked by the Hawks.

The Knights regained the lead for good on their second possession as Isaiah Jackson, who scored six touchdowns last week in the team’s quarterfinal win over Valwood, dashed 25 yards for a score to make it 12-7 less than four minutes into the game.

Frederica would go on to score 39 points in the first half after scoring 33 last week in the opening two quarters against Valwood.

The Knights added a third touchdown in the first quarter on a 5-yard pass from Simpson to Patrick Brunson. The tandem hooked up moments earlier for a 50-yard pass play that set up the Knights deep in Heritage territory.

Also before halftime, the Knights got a 32-yard TD run from Anthony, a 1-yard run by Harry Veal following his 57-yard catch and a 2-yard run by Jackson.

After halftime, the Knights punctuated the win with a 1-yard run by Jashawn Sheffield following his interception return inside the Heritage 5-yard line.

The next time the Hawks had the ball, Anthony picked off another pass and returned it 56 yards for a score that made it 53-7.

After that initial score allowed by the Knights, the Frederica defense shut down the Hawks as the Knights dominated the line of scrimmage for much of the contest.

The final quarter was played with a running clock under the mercy rule.

“I thought our kids played really well offensively and defensively,” Derrick said. “We just went out and executed and gave ourselves a chance to win. And now, we have an opportunity to win a state championship.”

The Knights saw their season end in the semifinals last year when they lost tough at home to Valwood after losing the lead late.

Frederica took the suspense out of this one early on their way to scoring over 50 points for the fifth time this season.

The 46-point final margin was also the Knights’ largest margin of victory for the season.

“Our defensive line dominated their front all night, and I thought our secondary did a great job all night,” Derrick said. “We caught the ball well on the perimeter and also down the field. I thought as a team we played really well collectively.”

Pierce County headed to state semifinals after defeating Monroe Area
Column: Looking at the GHSA football playoffs and the semifinal round
Posting....