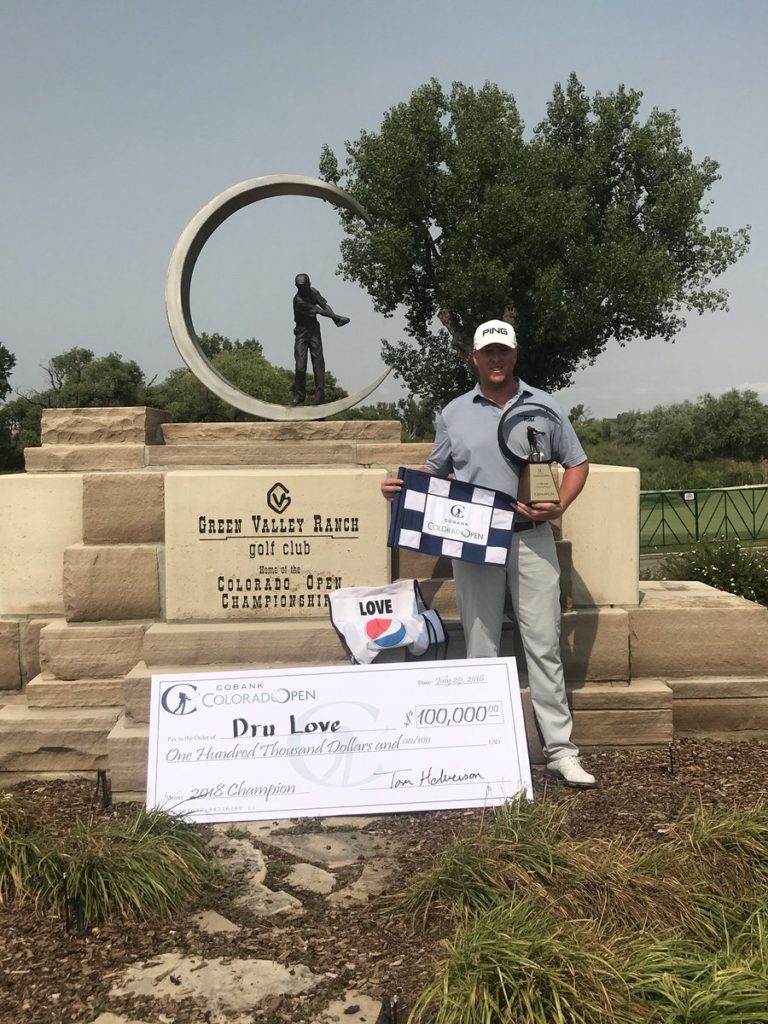 Dru Love notched a professional golf victory over the weekend while playing in a tournament in Denver.

Love shot 19-under-par 197 over the three rounds on the par-72 course, closing with a 64 in the final round for his lowest individual score of the weekend.

In the first round, Love posted a 68 and then fired a 65 in Saturday’s second round.

He finished regulation tied atop the leaderboard with Sam Saunders from Albuquerque, N.M.. Saunders closed with a 12-under 60 score in Sunday’s final round to forge the tie after 54 holes of play.

Love earned the victory though, taking home the $100,000 winner’s check and also earning an exemption from qualifying for future Colorado Open championships.

This year’s tournament was the 54th edition of the Colorado Open. Green Valley served as tournament host for the 15th consecutive year.

The field was limited to 156 players. It was open to participants who have active official handicaps that are 2.4 strokes or less.

Open to both amateurs and professionals, the tournament included a cut to the top 60 players and ties after 36 holes.

Past champions of the event include Al Geiberger, Steve Jones and Kevin Stadler.

Love is the son of longtime Sea Island touring pro Davis Love III. He played collegiate golf at Alabama and was a star player for the Frederica Academy Knights in high school.

Love is a two-time champion of the prestigious Golden Isles Invitational played annually at the Brunswick Country Club. He also won the 2015 Georgia Amateur Championship at Sea Island.

He has played in several PGA Tour events this year including the recent Barbasol Championship where he missed the cut.

Also at the Colorado Open, Savannah’s Tim O’Neal and Cumming’s Christopher Petefish finished tied for ninth at 12-under.