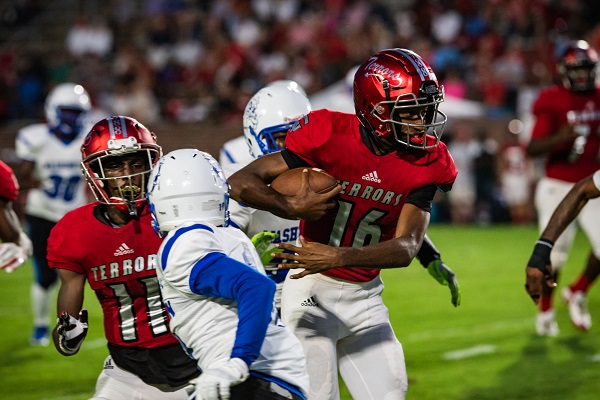 The win was the first of the season for the Terrors who lost their opening game 37-21 last week at home to Fort Dorchester (S.C.).

“Fort Dorchester was a really good team,” said GA coach Rocky Hidalgo. “Tonight, the opponent was different, but I thought we played a lot cleaner game on offense and defensively we’re starting to find some people who can play. All in all, I thought we did a good job.”

The Terrors churned out 436 total yards in the runaway win including 356 on the ground as two GA rushers gained more than 100 yards and another finished just shy of the triple-digit mark with his rushing and receiving numbers.

Sophomore quarterback TJ Lewis led the Glynn option-based ground assault with 155 yards rushing and a touchdown. Senior rusher Quantavious Bostic carried for 110 yards and two scores on just six attempts, and junior running back Nolan Grant picked up 97 total yards as he rushed for 74 and a score and had 23 yards receiving.

“TJ is gonna be really special. He’ll be like (Glynn’s previous two quarterbacks) Deejay Dallas and Randon Jernigan before it’s all said and done.

“We’ve got a lot of kids out there running around like him that are also good football players.”

Glynn added 80 yards passing, all by Lewis who was 4-of-7 for the night with no interceptions.

The Bulldogs (0-2), who lost their opener last week to Douglas, finished with 210 yards including only 10 on the ground.

Their quarterback, sophomore Monye Jones, was 18-for-31 passing for 200 yards.

He threw a touchdown pass on the Bulldogs’ opening drive, hitting senior receiver Ronaid Mason for the score.

Washington got the ball on the Glynn 28-yard line after a failed fake punt attempt by the Terrors in which there was miscommunication between the sidelines and the field.

The Bulldogs’ lead was short-lived, though, as the Terrors would score on their next four possessions to hold a 28-7 lead at haltime.

Mike Brinson – Quantavious Bostic is lifted off the ground by a teammate after a touchdown Friday night.

Alan Partin scored from a yard on the first drive, and Caden Hutchinson ran in from 4 yards for Glynn’s final score inside the final three minutes.

The Glynn defense stopped the Bulldogs on downs to get the Terrors the ball inside their own 5 before the offense drove the length of the field to punctuate the win.

“This offense is hard to stop when you don’t have negative plays. That’s what that drive was, just the consistency you have to have,” Hidalgo said.

The Terrors will be at home again next week for an early Homecoming game against Groves.

In other local games last night, the results were as follows:

The Knights absorbed a second straight tough loss to open the season when they fell to Valwood at home on St. Simons Island.

The teams battled to a scoreless tie after regulation, but the Valiants pulled out the victory in overtime when they scored on their opening drive of the extra period on a pass from Caleb Burns to Willie Roberson.

The Valiants added the extra-point for a 7-0 lead.

Provided photo – Members of the Frederica Academy defense bring down a Valwood runner Friday night in the Knights’ 7-6 overtime loss at home.

The Knights would answer with a score on a run by Isaiah Jackson on their only OT possession. Frederica chose to go for the two-point conversion and the win, but a Patrick Brunson run was stopped short of the goal line and the Valiants were thus the winners.

Frederica appeared to lose the game when it had a pass intercepted in the end zone, but the Valiants were called for roughing the passer, and the Knights got a fresh set of downs and new life.

Late in the fourth quarter, the Knights had a pass fall incomplete at the Valwood 2-yard line, but they felt it was a catch or at least pass interference against the Valiants.

The officials didn’t agree and called the attempt incomplete. Several FA players argued against the ruling, and the Knights were hit with two unsportsmanlike conduct penalties that backed them up.

They came away with nothing other than collective frustration before going into overtime.

The game was a matchup between the top two teams in the Georgia Independent School Association’s Class 3A rankings with Valwood topping the list and Frederica being second.

The Valiants defeated the Knights last year in the state semifinals when FA lost its lead in the final seconds.

Last week, the Knights lost their opener at home against Charlton County on a interception return for a touchdown late in the game that broke a tied score.

The Pirates fell on the road a second consecutive week, and again the Pirates were undone by their turnovers which also also hurt them in their 20-7 loss last week at Coffee.

Brunswick drove inside the Bartram 10-yard line on its opening drive, but a fumble kept the Pirates from possibly putting points on the scoreboard first.

The Bears drove the field after that to score on fourth-and-goal from the BHS 1-yard line.

They went up 14-0 before the end of the first stanza.

The Pirates were looking to cut their deficit in half before intermission, but again another trip inside the red zone ended with an interception and a missed scoring chance.

The home squad tacked on two more scores for a 28-0 lead going to the final quarter when BHS finally scored on a pass from KJ Lee to Xavier Been.

Brunswick’s Freddy Towns returned a fumble for another score later in the frame, but Bartram finished out the game with one last scoring march.

“We beat ourselves,” said BHS coach Sean Pender. “We played against a sound football team. They didn’t make mistakes. We did, and it cost us.

“We’ve definitely gotta learn to finish drives. We’re doing a lot of inconsistent things right now. We’ll get there. I believe it. It’s just not happening as fast as I would like.”

Brunswick will play at McIntosh County Academy next week which lost big to Pierce County last Friday at home and had an open date this week.