Team set to play in City of Palms Classic this week 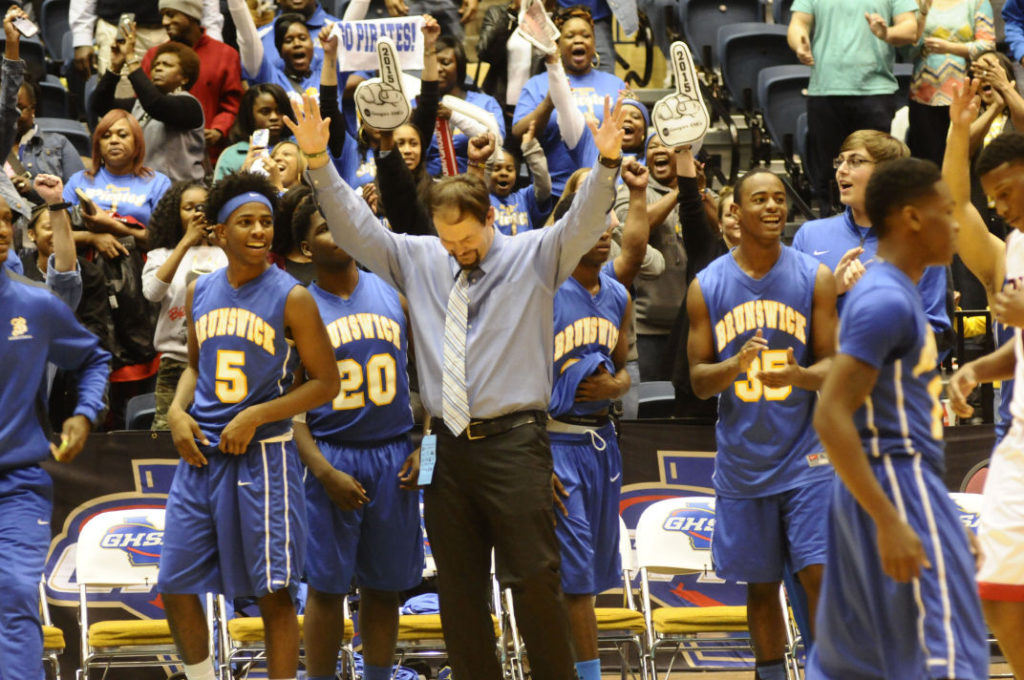 The Brunswick High boys basketball team is set to leave Wednesday morning for one of the biggest high school basketball tournaments in the country.

The Pirates are headed to Fort Myers, Fla., to participate in the City of Palms Classic, which is taking place for the 46th time this week and bills itself as the premier boys high school basketball tournament in the nation as the invitational tournament brings in top prep programs and their major college prospects.

It figures to be an eye-opening experience for the Pirates, said BHS head coach Chris Turner.

“I want our kids to see what is really out there,” Turner said. “If we compete and win, that’s great. The main thing I want to see is our kids compete. Our goal is to be playing the best basketball we can when we get ready to play the region and state tournaments.”

The tournament opened Monday and continues through Saturday. The Pirates will play their first game on Thursday.

Brunswick, which won a state title in 2015 and reached the state championship game in 2017, will not play in the main 16-team tournament which features several nationally-ranked teams including the IMG Academy, the No. 2 ranked team according to MaxPreps and Oak Hill Academy, which is No. 3 and is a perennial national powerhouse.

Other teams competing include No. 5 University (Fort Lauderdale, Fla.), No. 7 McEachern, which competes in Georgia’s Class 7A, No. 11 Paul VI (Fairfax, Va.), No. 16 Vashon (St. Louis) and No 18 Imhotep Charter (Philadelphia).

Some of the top players in the tournament include IMG senior Josh Green and junior Jaden Springer. Both players are ranked in the top 10 in their respective classes.

Also, Oak Hill has Cole Anthony, the No. 1 or No. 2 ranked senior in the country depending on the poll. He is the son of former NBA player Greg Anthony.

Brunswick is slated to face La Crosse at 2 p.m. Thursday while Glens Falls and Petal will play at 5:30 p.m. the same day.

The winners will square off on Saturday as will the two losing teams from the Thursday matchups.

La Crosse won the Wisconsin Division 2 state title last season. The Red Raiders would be in the main bracket, but Wisconsin teams are no longer to permitted to play in 16-team tournaments.

The team features brothers Jonathan Davis, a 6-foot junior point guard who already has an offer from Wisconsin, and 6-5 junior Johnny Davis along with 6-8 junior Terrance Thompson.

The Red Raiders made the semifinals last year and did not lose a single player off that team.

“They’re really big and their players have a high basketball IQ,” Turner said. “They’re smart, don’t beat themselves and are really good defensively. That point guard is really good. He’s tough. He’s their quarterback. Everything runs through him.”

Glens Falls made the New York state semifinals last season and is led by senior guard Joe Girard III who is committed to Syracuse after considering offers from Duke, Michigan and Notre Dame among others. Already the all-time leading scorer in New York, he amazingly averaged 50 point a game last season.

Petal reached the Class 6A round of 16 in Mississippi last season. The Panthers are led by junior forwards Treylan Smith and Caleb McGill, both 6-5, and senior guard Don Avilla.

Brunswick got an invite to this week’s tournament largely because of its 6-7 freshman Joyful Hawkins who is averaging 15 points and 10 rebounds through the first eight games for the Pirates who are 7-1 on the season.

Hawkins, who already has an offer from Georgia and new head coach Tom Crean, is one of the top prospects in the 2022 class.

Turner says Hawkins has the potential to be a big-time player.

“He’s the most talented kid I have ever coached,” Turner said. “With him, if he has a good attitude and works hard, the sky is the limit for him. He’s still learning how to play, but he has the skills. He can shoot, handle the ball a little bit, run and jump and he’s really quick for his size.”

The Pirates suffered their first loss of the season last Saturday at Coffee which decked Brunswick 72-57.

The Trojans took over as the top-ranked team in Class 6A on Monday. Brunswick had been ranked fifth in the state in the same poll, but the Pirates fell to seventh this week following the Saturday loss to Coffee.

Brunswick is currently playing without senior guard Kelan Walker who has a broken hand. Senior guard Torrey Dickens recently was cleared to play after having a medical issue to start the season and should provide a boost to the team.

“We’re very inexperienced as far as players having played on the varsity level,” Turner said. “Everyone thinks we’re this great team. We lost a lot of really good players, and it’s going to take us some time to develop.”

In addition to playing their games, Turner said the Pirates will watch several games as a team during the City of Palms tournament so the players can see how some of the premier teams in the country play the game.

More than 530 players who have participated in the event have played at major colleges with another 140 making it to the NBA.

Also, Kwame Brown played in the event while with Glynn Academy. He went on to become the first prep player ever taken No. 1 overall in the NBA draft when he was taken by the Washington Wizards in 2001.

Coaches from several of the nation’s top college programs will be at the tournament recruiting. Those attending in the past have been North Carolina’s Roy Williams, Duke’s Mike Krzyzewski and Kentucky’s John Calipari.

NBA celebrities who have attended include Larry Bird, Billy Donovan and Doc Rivers.

“This tournament will help us take our program to the next level,” Turner said. “We try to schedule the best teams we can.”

Also during the holidays, the Pirates will play in the McDonald’s Invitational hosted by Tift County. They will take on three teams from Florida including Tallahassee-Lincoln, Lake Minneola and Norland.

The Pirates aren’t the only local team playing in holiday tournaments.

The Glynn Academy boys (6-2) are playing in the U-Save-It Basketball Classic in Albany this week and then the Vidalia Christmas Tournament next week.

The Brunswick and Glynn teams will face off for the first time this season in Region 2-6A action on Jan. 4.

Column: Glad to see Georgia team playing this weekend in prep football event
Column: Recruiting is a game before the games
Posting....