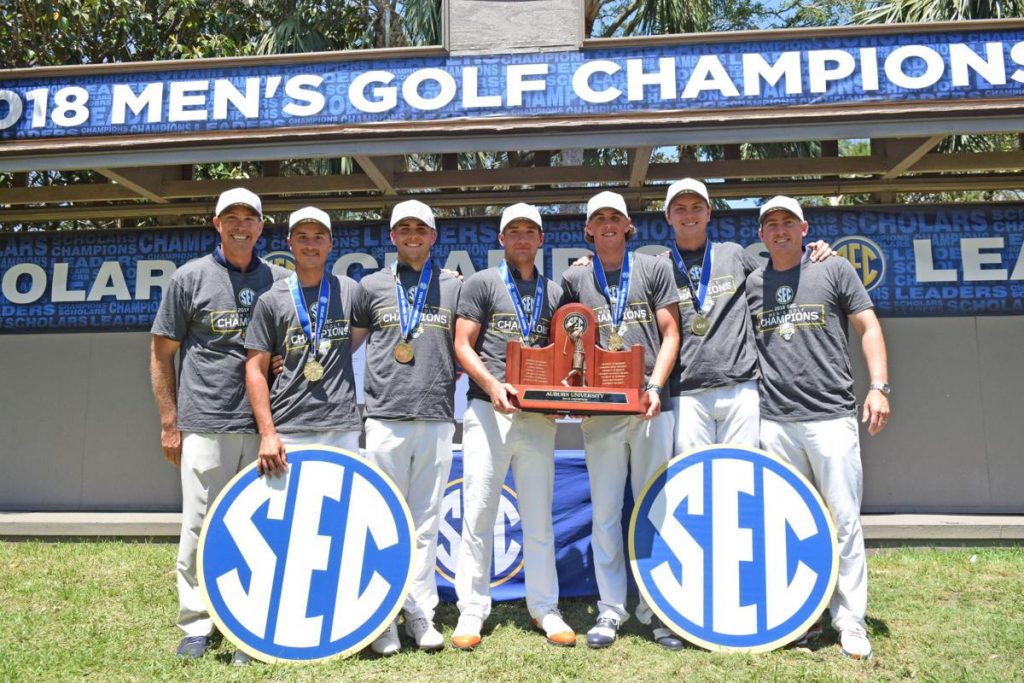 But for now, the biggest one he has ever made happened Sunday when the Auburn freshman drained a 20-footer for birdie on the 18th hole at Sea Island’s Seaside Course which gave the Tigers this year’s SEC championship.

“That was the biggest putt I’ve ever made in my life,” Padgett said. “It was great being able to do it for my team. To do it as an individual in a tournament is cool, but doing it for your team is the greatest feeling.”

With Padgett’s putt on the final hole, Auburn defeated rival Alabama 3-2 in the match-play finals at the SEC Men’s Golf Championship.

The league crown was the first for Auburn since winning at Sea Island in 2002 and the fourth in program history.

The Tigers and Crimson Tide were tied at 2-2 after splitting the first four matches, so the title came down to the final matchup between Padgett and Alabama senior Johnathan Hardee who were all square in their match through 17 holes.

Hardee evened the match going to the par-4 18th with a birdie on the par-3 17th after he nearly made an ace with his tee shot that rolled just past the cup.

Both players missed the fairway with their drives on 18. Hardee hit his second shot from the sand and landed it just short of the green. Padgett hit his approach from the rough onto the green.

Hardee would chip within six feet of the cup to set up a par putt that he never attempted after Padgett calmy sank his long birdie putt that clinched the championship for the Tigers who erupted in a wild celebration after the ball found the bottom of the cup.

“Walking down the fairway, someone asked me if we were going to need a playoff hole,” Padgett said. “I looked him right in the eye and said, ‘There’s not going to be a playoff. I’m making birdie.’ I love the competition of match play. I thrive on it. I had a good read on it and I could tell after about three or four feet that it was going in.”

Auburn coach Nick Clinard said that confidence is what he likes about his freshman from Wichita, Kan.

“He was our anchor in match play all week,” Clinard said. “We believed in him and he believed in us. He got it done. I asked him if he wanted to look at it from behind the hole and he said, ‘No Coach, I’ve got it.’ It was right in the middle. It was fun to watch.”

It was painful for the Tide, though, who were hoping for extra holes to decide the championship for the second straight year. Vanderbilt won the first SEC crown decided by match play in extra holes last spring.

“We battled all week,” Alabama head coach Jay Seawell said. “Our guys were behind against all three opponents this weekend. We did a really good job of flipping those matches the first two times and tried again today. We were in a hole and our guys dug out. Jonathan hit a shot of a lifetime on 17 to take it to 18, but give them credit. Their guy hit a great birdie putt to win.

“It doesn’t feel very good right now. I am disappointed for our players because I know how hard they worked and knew how much an SEC Championship would mean to them. It doesn’t take away from who they are, what they do and how they represented Alabama. As a coach, I am proud, I hurt and feel all the emotions that come with not winning.”

Auburn came into the conference tournament ranked ninth in the country and were seeded fourth for match play after the 54-hole stroke-play competition to cut the field to eight teams to play match-play to get the ultimate winner.

The Tigers knocked off Arkansas 3-2 in Saturday’s quarterfinals before topping LSU 4-1 in the semifinals to reach the championship.

Alabama got to the finals with a 3-2 win over Vanderbilt and 3-1-1 victory over Florida.

The Crimson Tide were trailing in four of the five matches early on Sunday before reversing their fortunes and grabbing the first two points of the day with wins by Davis Shore and Lee Hodges.

Auburn took the next two points, though, to draw even with 2&1 victories from both Trace Crowe and Brandon Mancheno.

That meant the final pairing would decide the title and Padgett’s putt got it done for the Tigers.

“I’m really proud of the guys, not only the five that were with us but the whole team and those cheering in the locker room back home,” Clinard said. “This win is for all 12 of them.”

The tournament final was broadcast live on the SEC Network for the first time.

Auburn gets an automatic bid to the NCAA regionals by clinching the conference title, but the other 13 teams in the SEC are also expected to get regional berths when those are announced Wednesday afternoon.

Regionals will take place May 14-16 at six different sites across the country. Thirty teams and six individuals will advance from the regionals to the NCAA tournament set for May 25-30 at Karsten Creek Golf Club in Stillwater, Okla.