One of Georgia’s pro-life organizations is thanking a state representative for his assistance after the group joined with another to place a nativity scene in one of the largest state government buildings. 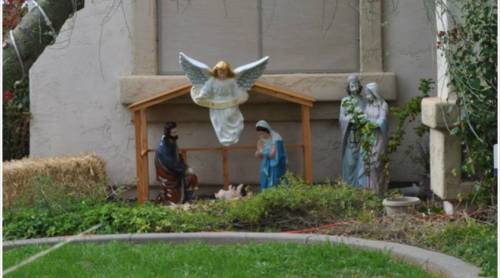 One of Georgia’s pro-life organizations is thanking a state representative for his assistance after the group joined with another to place a nativity scene in one of the largest state government buildings.
Georgia Right to Life, a group that touts its “respect and effective legal protection for all innocent human life from earliest biological beginning through natural death,” issued a

press release Thursday thanking State Representative Philip Singleton, a Republican from the 71st House district who reportedly sponsored the organization’s effort to display a nativity scene in the Twin Towers of the Sloppy Floyd office building during the Christmas season. The initiative is a partnership with an organization called “American Nativity Scene” (ANS).

The Sloppy Floyd building is the central work location for thousands of Georgia’s state
employees.
“The message of Christmas is that God sent his only Son to be the savior of all who place their trust in Him,” Singleton was quoted saying in a news release. “It’s the promise of eternal life with God offered to a lost and dying world.”

“This is the heart of the Gospel, which means ‘good news’, and proclaims that the promise of salvation is only found in placing one’s faith and trust in Jesus Christ.”

Over the past seven years, ANS has shipped more than 350 nativity scenes to 36 states for display in town centers, city halls, courthouses, parks, and especially state capitols. ANS says its effort is to honor the birth of Christ, His message of hope and love, and to remind others of the real reason for the Christmas season.

ANS has a pre-emptive defense of its nativity scene placements on the organization website, which says:

We must all realize that the private funding of our Nativity Scenes represents our government merely being the gate keeper up holding free speech.  Your efforts in this area are “fully clothed and armored” with the full protection of the first amendment of the United States Constitution, the Supreme law of our land.  State Capitols and parks are not religious buildings or settings: they are open to all citizens of faith, or of no faith. This factoid being one of the key reasons our great country was founded.

Look it up!  No where in the United States Constitution will you find the words/concepts Separation of Church and State.  Quite the contrary- the Supreme Court has consistently ruled the oft used “Establishment Clause” that forbids the establishment of one state religion for all, does not require a state entity to exclude private religious speech from public forums. That is a consistency that there is no violation for our Government to enact a neutral policy that happens to benefit religion.

Georgia Right to Life cited a poll conducted by and published in The Washington Times which surveyed more than 1,500 people. The group says the poll revealed that “72% [of respondents] said they agreed with allowing religious scenes to be displayed on government property” by private individuals.