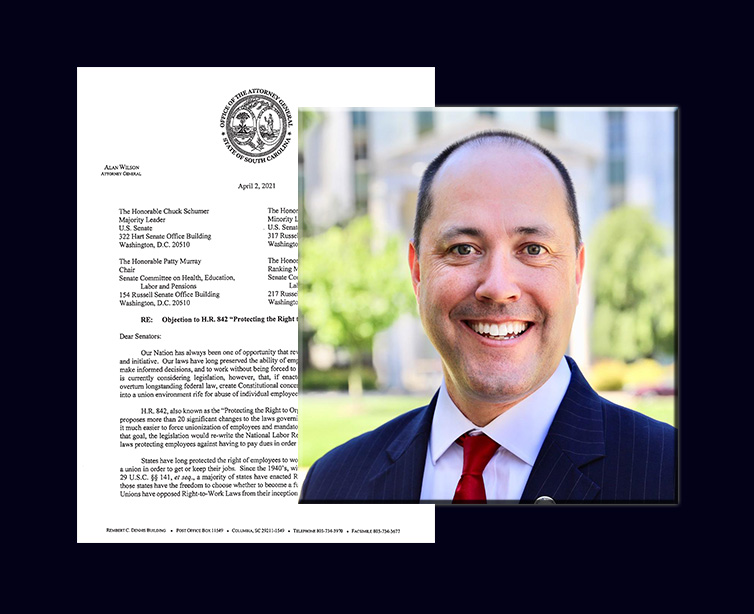 Attorney General Chris Carr has joined a 14-state coalition of attorneys general in sending a letter to U.S. Senate leaders opposing a pro-union bill. The Protecting the Right to Organize Act of 2021 (PRO Act) would negate state right-to-work laws and require workers to pay union dues in order to keep their jobs.

“Georgia is a right-to-work state, and we have long preserved the ability of employees to speak for themselves, make informed decisions and work without being forced to pay fees to third parties,” said Attorney General Chris Carr. “The PRO Act will impair the rights of employees and the rights of private employers, and we are seeking to put a stop to the enactment of this misguided bill.”

The letter from the attorneys general points out that unions have long fought right-to-work laws, but the U.S. Supreme Court has repeatedly rejected union arguments that tried to overturn them. For example, in a 1949 case, Lincoln Federal Labor Union No. 19129 v. Northwestern Iron & Metal Co, a union claimed that right-to-work laws were unconstitutional, arguing that the right to assemble gave the union the right to require workers to participate in union assemblies or lose their jobs. The Supreme Court quickly ruled against the union and in favor of right-to-work laws.

The PRO Act seeks to undermine the right-to-work laws passed by 27 states. For example, one section condones union contracts that would force employees to pay union fees “as a condition of employment.”

The attorneys general say in their letter that they are responsible for upholding the laws in their states, including laws that guard the freedom of employees to keep their jobs regardless of whether they pay union dues. The PRO Act would abruptly end 75 years of freedom by ending right-to-work laws in 27 states. The attorneys general write, “Accordingly, we respectfully urge Congress not to enact the PRO Act, particularly those provisions negating the right-to-work laws.”

See the letter below.