Brunswick District Attorney Jackie Johnson skirted Georgia law when she appointed her own special prosecutor in the case involving former Glynn County police officers, but even in her supposed recusal, Johnson has continued to advise on the case.

In February of 2020, a grand jury indicted Glynn County Police Chief John Powell, Vidalia Police Chief Brian Scott, and former Glynn County officers David Haney and David Hassler after a grand jury returned a 20-count indictment, most of which were not criminal offenses but departmental policy violations of the Glynn PD. The case was presented by Special District Attorney Tracy Lawson, who was handpicked to prosecute the case by Jackie Johnson. [Background on indictment here]

OCGA 15-18-5 requires that when conflicts of interest arise, the district attorney must contact the Attorney General’s Office for the appointment of a special prosecutor. During her tenure of an approximated 10 year period, Johnson has requested a special prosecutor 27 times. While none of the recent prosecutions of law enforcement (to include James Cassada, Cory Sasser, and Zecharaiah Presley) have yielded a recusal by the office despite the working relationship with each, the precedent for recusal in cases involving Glynn County employees exists, according to the document provided by the Attorney General’s Office. Those same documents show no record of Johnson making a request to the state, effectively alleging that Johnson did not follow the procedure as required by Georgia law in appointing her own special prosecutor in the case against the former Glynn County police officers. 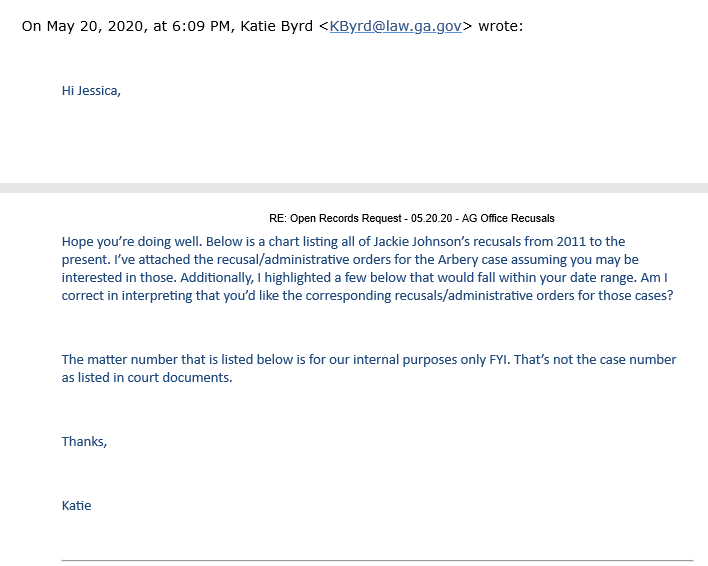 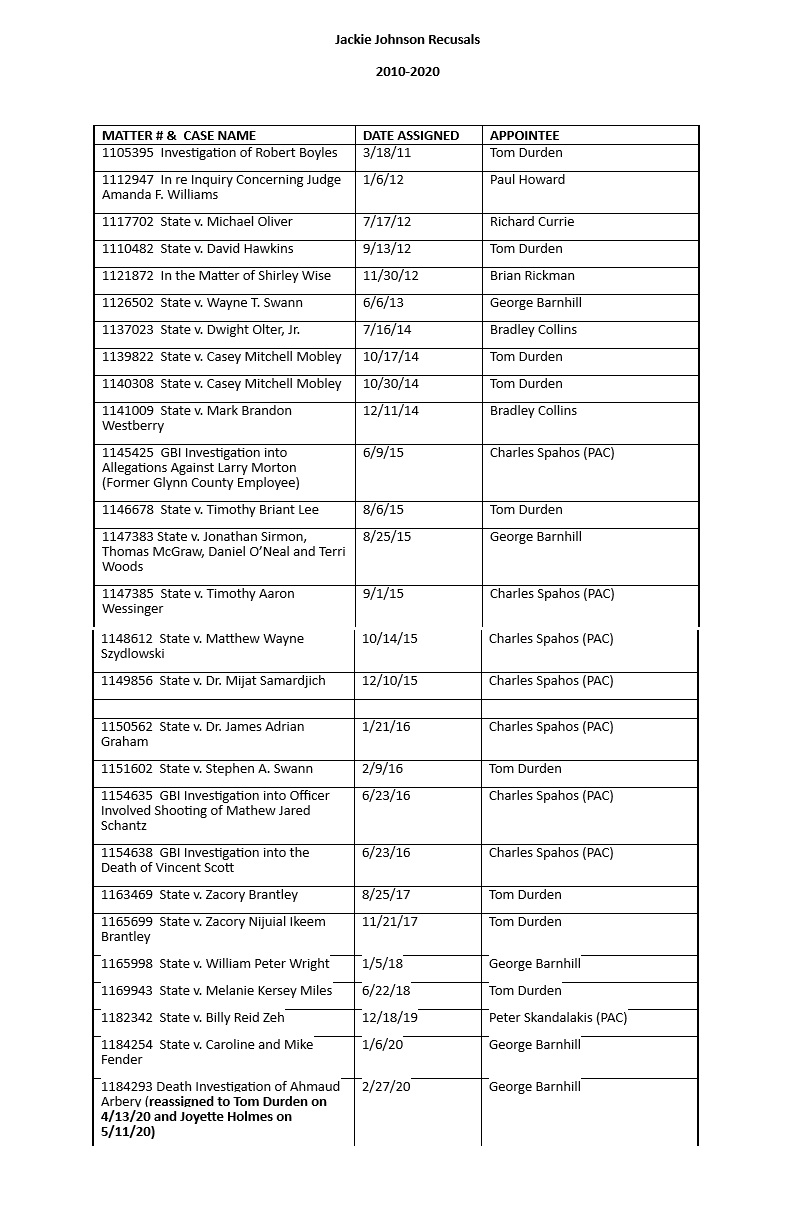 Tracy Lawson was appointed as a special prosecutor in November 2019 according to a press release by Jackie Johnson’s office. While the announcement asserts a number of findings about the then-forthcoming grand jury proceedings, Johnson does not mention who appointed Lawson. 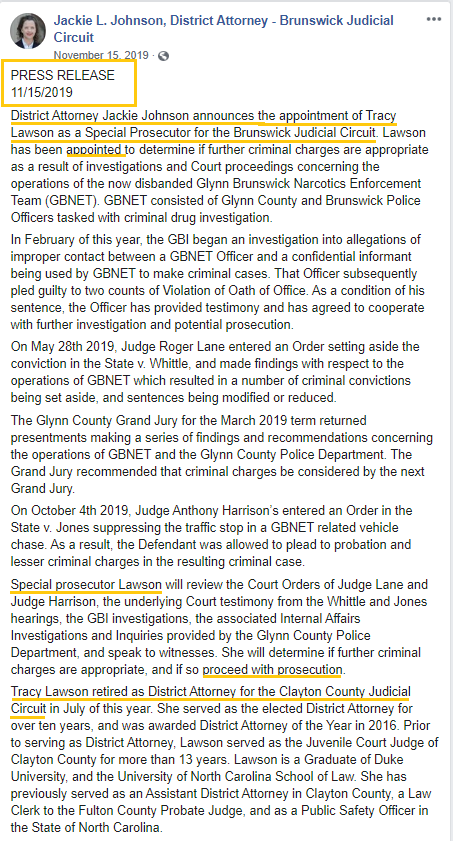 In the letter to those involved in the grand jury proceedings, Lawson signed correspondence on Jackie Johnson’s official office letterhead and directed all correspondence to the Brunswick Judicial Circuit’s Office of the District Attorney generally, not Tracy Lawson. 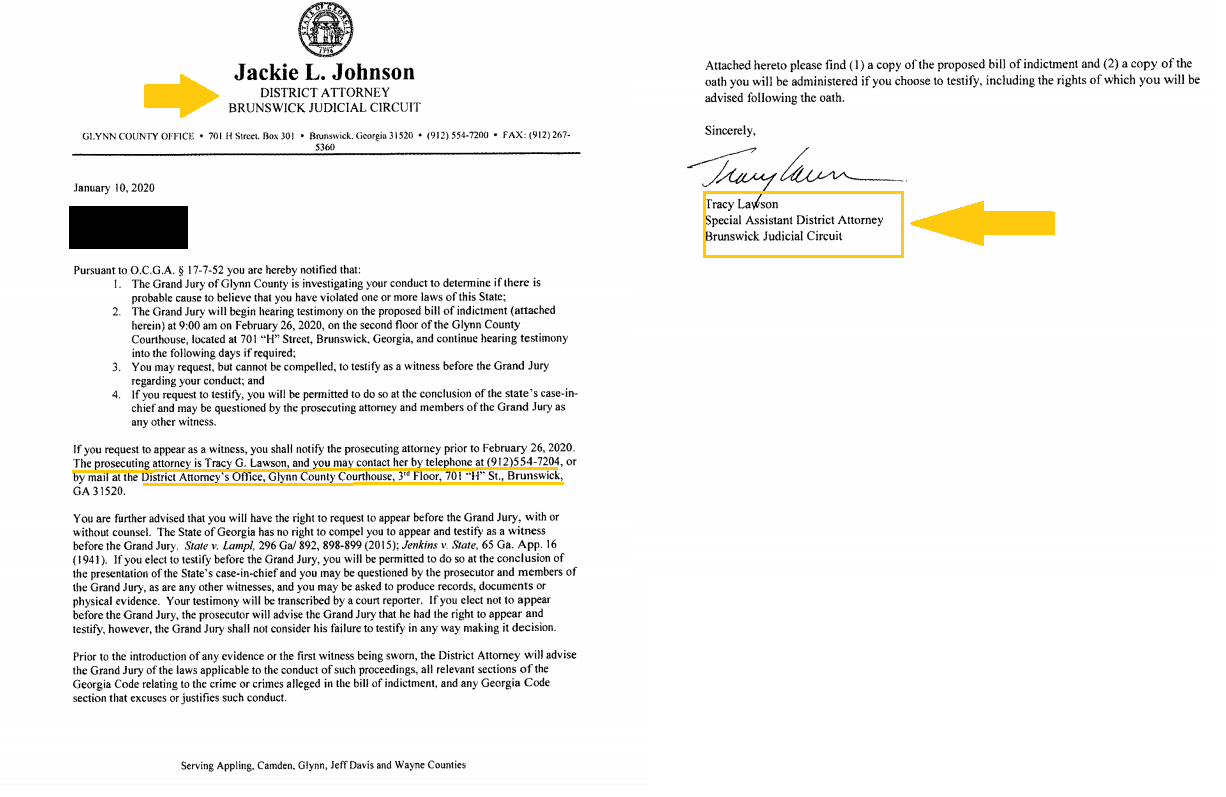 Even after the indictment and after it was well known that Johnson ‘stepped aside,’, Jackie Johnson has continued to make decisions related to the case that Lawson is supposedly prosecuting independently as evidenced in this email about the bond conditions of the most recent Glynn PD case indictment. 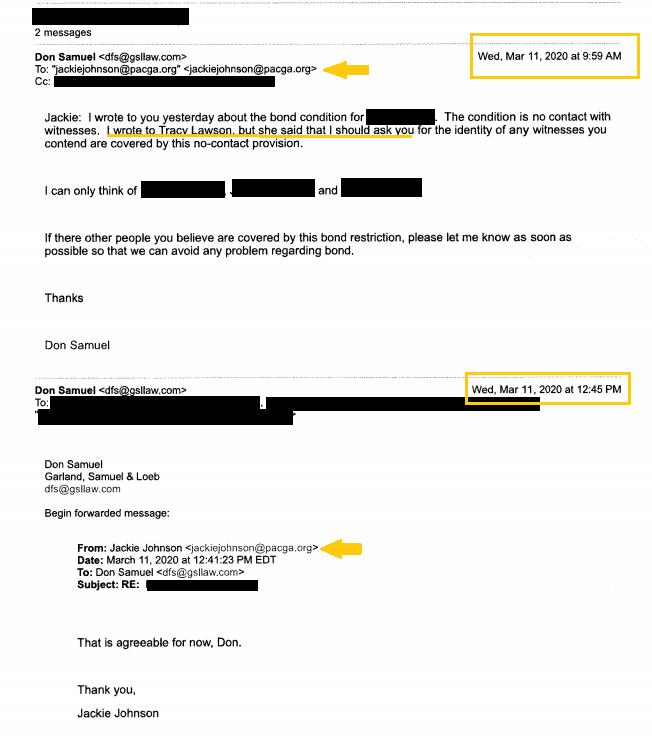 The Prosecuting Attorneys’ Council of Georgia (PAC) does have its own policy in accordance with state law (O.C.G.A. § 15-18-30 (2018)) which permits the appointment of a retired prosecuting attorney or a private attorney in good standing under very specific circumstances. Under 9.3 of the PAC Policy & Procedures, the legal expertise is paid for by the PAC, which is why the council first appoints other current prosecutors in an effort to limit expenses.

Unfortunately for Johnson, the PAC policy only permits this temporary assistance when a district attorney is looking for assistance to 1) clear up a backlog, or 2) if legal expertise is beyond the scope of the permanent staff in the office. The Glynn Co. PD case is one that is neither on the list of backlogged cases nor outside of the scope of the BJC staff expertise as the office has prosecuted a handful of other cases with the same or similar charges in the last two years alone.

Why Johnson requested a special prosecutor in the McMichael case and the Morton case, appointed her own in the most recent Glynn PD case, but did neither in the Sasser, Cassada, and Presley cases remains unanswered. Johnson has never responded to a request for comment by AllOnGeorgia.

Ga AG Wants Congress to Pass Bill for First Reponders Who Die of COVID-19
McCollar on Racial Inequalities, Injustices: “Our City is Not Exempt”