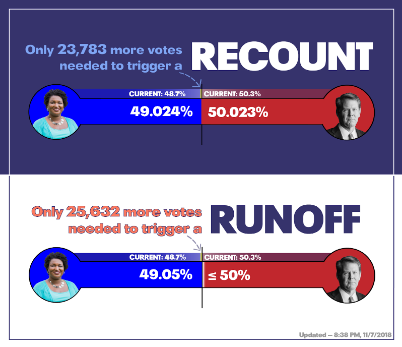 The information outlined below was provided direct from the Abrams campaign. It has been published in its entirety without edits.

This evening, Abrams for Governor campaign manager Lauren Groh-Wargo and attorney and campaign chair Allegra Lawrence-Hardy outlined why Secretary of State Brian Kemp’s declaration of victory is premature at best.

The current state of the votes

What the voters want and deserve

·         * Recounts – Candidates that lose by one percent or less have the right to request a recount within two business days of the Secretary of State’s certification of the results.

·         ** Runoffs – If no candidate wins a majority of the votes cast to fill that office, there will be a run-off election.[1] The run-off will be held on December 4, 2018, unless postponed by court order, and will only include non-federal candidates.

Early Voting: During a run-off, the county only needs to have early voting “as soon as possible.”[2] There is no statutory timeline for when early voting must start, but it must end by the Friday before the election.

“Brian Kemp earned nearly two million votes on Tuesday – by far the most of any gubernatorial candidate in our state’s history,” said Cody Hall, Press Secretary. “Absentee ballots are counted and Kemp leads his opponent by 64,000 votes. Based on counts released by the Secretary of State’s office, Brian Kemp’s margin is so large that the number of provisional ballots and overseas ballots will not change his Election Day victory. Simply put, it is mathematically impossible for Stacey Abrams to win or force a run-off election.