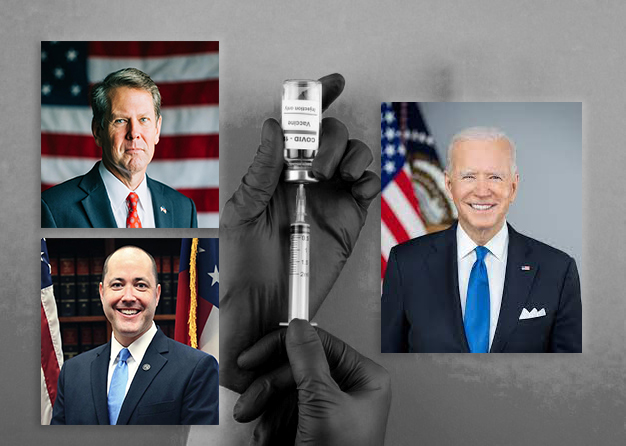 Governor Brian Kemp and Attorney General Chris Carr today announced the State of Georgia has filed a lawsuit challenging the Biden administration’s employer vaccine mandate. The Emergency Temporary Standard (ETS) setting forth the mandate was published in the Federal Register on Nov. 5, 2021.

“In addition to vilifying Americans for their personal choices, Joe Biden’s vaccine mandates are unlawful and a recipe for economic disaster,” said Governor Kemp. “With inflation skyrocketing, the supply chain screeching to a halt, and job creators across the country desperately searching for more workers, Biden is pouring gasoline on a fire. This federal government power-grab defies reason, and Attorney General Carr and I will not allow this administration to force hardworking Georgians to choose between their livelihoods and this vaccine.”

“This unlawful mandate is yet another example of the Biden administration’s complete disregard for the Constitutional rights afforded to our state and our citizens,” said Attorney General Carr. “The federal government has no authority to force healthcare decisions on Georgia’s companies and its employees under the guise of workplace safety. We are fighting back against this unprecedented abuse of power to stop this mandate before it causes irreparable harm to our state and its economy.”

The lawsuit challenges the ETS as issued by the Biden administration’s Occupational Safety and Health Administration (OSHA) and the United States Department of Labor. Specifically, the lawsuit asserts the ETS:

• Exceeds the Department of Labor’s statutory authority;
• Fails to comply with the standards for issuing an ETS; and
• Conflicts with the First Amendment and the Religious Freedom Restoration Act.

Georgia has joined the states of Florida and Alabama, along with several private employers, in filing the lawsuit with the United States Court of Appeals for the Eleventh Circuit. Private employers that are also parties in the action include the Georgia Highway Contractors Association, the Georgia Motor Trucking Association and Robinson Paving Co.

A copy of this lawsuit can be made available by request to the Office of the Attorney General.

Governor Brian P. Kemp and Attorney General Chris Carr will file a complaint later today, joined by Alabama, Idaho, Kansas, South Carolina Gov. Henry McMaster, Utah, and West Virginia, against President Joe Biden and many federal agencies within the administration in the U.S. District Court for the Southern District of Georgia (Augusta Division). The complaint, in part, explains how the Biden Administration’s unprecedented, unlawful, and unconstitutional COVID-19 vaccination mandate for federal contractors has placed Georgia’s state agencies and elected officials, including Governor Kemp, the Georgia Department of Agriculture, and the University System of Georgia, in an untenable situation.

“In addition to being an unlawful and unconstitutional overreach, this vaccine mandate on federal contractors will only further divide Americans and hamstring our economy,” said Governor Kemp. “Polling shows 70 percent of unvaccinated Americans say they would quit their jobs if their company required the COVID-19 vaccine. From an employer’s perspective, 9 in 10 fear significant reductions in their workforce if they had to implement vaccine mandates. We will not allow the Biden Administration to circumvent the law or force hardworking Georgians to choose between their livelihood or this vaccine.”

“We are filing suit against the Biden administration in response to the government mandate placed on Georgia’s federal contractors,” said Attorney General Chris Carr. “We will challenge this heavy-handed directive that not only serves as a clear violation of law but also places immense burden on our state. Just as we believe in protecting the physical health and well-being of our fellow Georgians, we are equally dedicated to protecting them from the unlawful actions of the federal government.”

“We have deep concerns about this mandate because of facilities we share with other state agencies named in this lawsuit,” said Georgia Department of Agriculture Commissioner Gary W. Black. “It’s also critical that we keep our goods flowing from port to processing, particularly when it comes to our essential food supply chains, and President Biden’s vaccine mandate for federal contractors could significantly impede those efforts.”

The plaintiffs are asking the court to enjoin the defendants and those acting in concert with them from enforcing the mandate on any State of Georgia federal contracting agency, subcontractor, and employee.

President Biden and the other federal defendants have acted unlawfully in many ways:

A copy of the complaint can be made available upon request to the Office of the Attorney General.