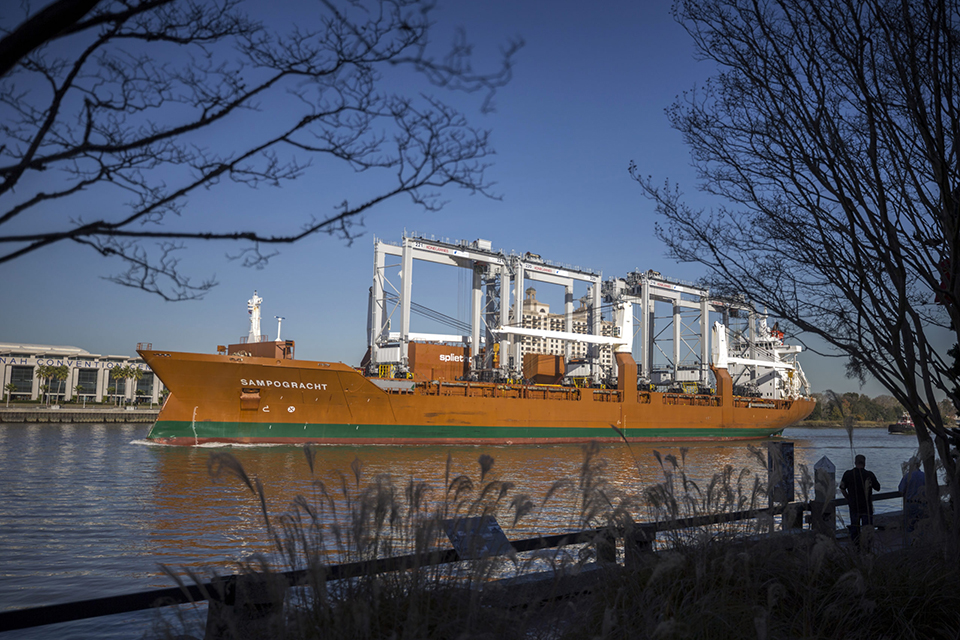 Five new rubber-tired gantry cranes arrive at the Port of Savannah on Friday, Dec. 3, 2021. The Georgia Ports Authority Board approved on Dec. 6 the purchase of nine additional RTGs, for a total of 29 to be delivered.

“Through ingenuity and teamwork, GPA has put into place what amounts to the largest current expansion for a port operation in North America,” said Georgia Gov. Brian Kemp. “It’s a testament to the leadership and forward thinking at America’s most efficient gateway for containerized trade.”

By January, GPA will open 670,000 TEUs of new annual capacity at Garden City Terminal. In early March, 155,000 TEUs of additional terminal capacity will be available, and by June another 850,000 TEUs will come online at the port. The projects will deliver a total capacity increase of 25 percent in six months.

Also at its meeting Monday, the GPA Board approved the $24.4 million purchase of nine electric-powered rubber-tired gantry cranes that will help support the expansion.

“After our busiest month ever in October, this new container space is coming online just in time,” said GPA Board Chairman Joel Wooten. “By expediting the projects needed to ensure the free flow of cargo, we’re addressing our customers’ concerns today, and working to re-establish our longtime practice of keeping capacity 20 percent above current demand.”

“Moving more than half a million TEUs across our docks in one month is the result of new capacity already coming online and the incredible teamwork of GPA employees, the International Longshoremen’s Association and port customers,” Lynch said.

Off-terminal, GPA is growing by another half-million TEUs in annual capacity by expanding its inland port strategy to include flexible “pop-up” container yards near manufacturing and distribution centers.

GPA has activated the yards in partnership with its two Class I rail providers, CSX and Norfolk Southern, as well as regional property owners. Four locations in Atlanta, Savannah, Statesboro, and Murray County in Northwest Georgia are up and running, bringing cargo closer to customers and increasing capacity by reducing unnecessary container storage time on Garden City Terminal.

The new facilities will also reduce truck traffic. The new Atlanta yard, for example, will avoid more than 500 roundtrip truck miles per box, with anticipated volumes of 1,200 containers a month. The GPA is also arranging additional sites, which will bring the total added capacity for this new supply chain program to 500,000 TEUs.

Lynch said with the new capacity arriving and customers clearing cargo more quickly, the Port of Savannah has already seen a dramatic drop in the length of time containers are on terminal. He said the number of import containers on port for more than four weeks has dropped by 53 percent compared to September.