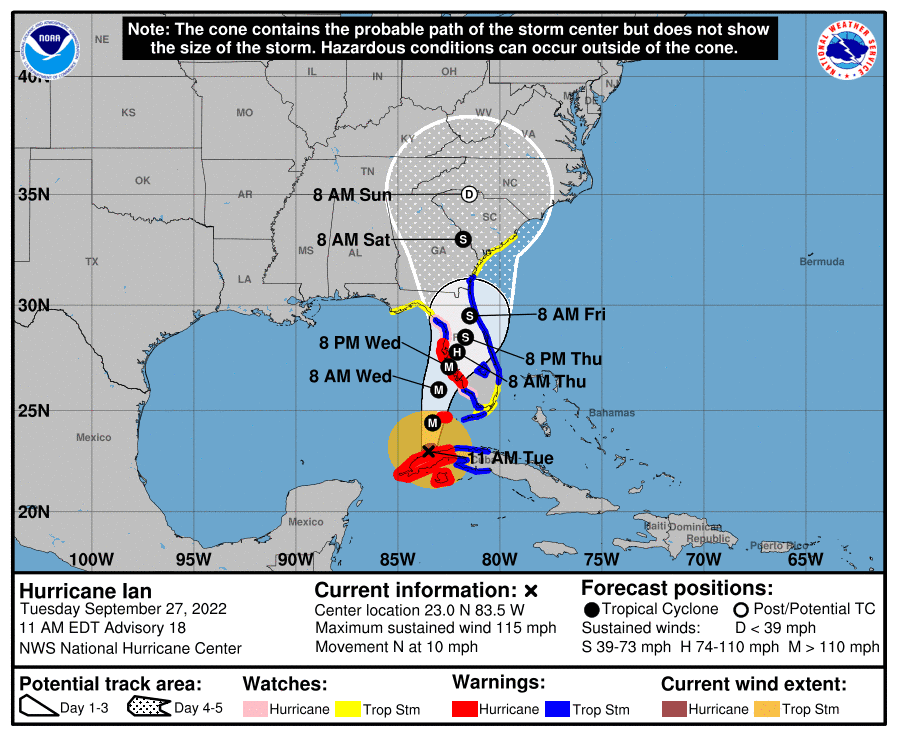 Governor Brian P. Kemp today issued a State of Emergency order for all counties in Georgia in preparation for Hurricane Ian’s impact later in the week. As the storm moves through the state beginning on Friday and exiting on Sunday, heavy rainfall and damaging winds will be possible throughout Georgia. The State of Emergency will go into effect at 7:00am on Thursday, September 29, and will expire at midnight on Friday, October 28. You can read executive order 09.27.22.01 here.

This latest executive action related to Hurricane Ian follows the activation of the State Operations Center on Monday morning, ensuring all relevant state, local, and federal agencies are closely coordinating on storm preparations and response. The Georgia Emergency Management and Homeland Security Agency (GEMA/HS) remains at a Level 2 elevated activation and continues to monitor Hurricane Ian’s progress. Governor Kemp, GEMA/HS officials, and other leaders are working closely with local officials on planned and implemented storm response. GEMA/HS also has teams standing by to deploy to affected counties, when appropriate.

Ian is now a Category 3 hurricane moving north at roughly 10 mph with maximum sustained winds of 115 mph. Further strengthening is expected, with Ian forecast to reach Category 4 status before slowly weakening tonight and during its expected landfall tomorrow and Thursday over west-central Florida. Starting Friday, Ian will likely impact Southeastern Georgia as a tropical storm or tropical depression with heavy rainfall. Though there is still uncertainty about its ultimate path on Friday and into the weekend, tropical storm force sustained winds of over 40 mph will be possible across all of Georgia on Friday and Saturday. Damaging winds will be possible statewide, even well away from the center of the storm, and downed trees and powerlines are possible statewide on Friday and Saturday. Widespread rainfall of 2 to 4 inches is also possible statewide, with 4 to 6 inches or more forecast in Southeast Georgia. Flash flooding, power outages, and other dangerous situations are possible, especially in Southeast Georgia.

A Tropical Storm Warning has been issued for Camden and Glynn Counties, and a Tropical Storm Watch has been issued for the remainder of the Georgia coast. Tropical storm conditions will be possible along the entire coastline of Georgia tomorrow through Saturday, with moderate to perhaps major coastal flooding, dangerous rip currents, and beach erosion all possible. Three to five feet of storm surge above ground level will be possible in surge-prone areas along the entire Georgia coast, and the heavy rainfall in Southeast Georgia could exacerbate any flooding issues that develop.

What Georgians Can Do To Prepare:

Governor Kemp urges all Georgians to remain weather alert and to take the necessary precautions to protect themselves and their families. Those directly impacted by the storm’s path are encouraged to consult GEMA/HS’ informational website that includes tips on storm preparedness before, during, and after a hurricane.

▪ Take appropriate action based on your location.
▪ Residents who are in vulnerable housing situations, including those in low-lying areas or at-risk floodplains, should consider relocating temporarily to higher ground.
▪ All of South and Coastal Georgia should pay close attention to guidance from local officials and review family emergency plans with those in their care.

We encourage everyone to start planning now by:

▪ Preparing Ready kits
▪ Reviewing communications plans for their families
▪ Paying attention to guidance from local officials and trusted news sources for the most up-to-date information.
▪ Visiting http://www.gema.georgia.gov for more information.