After 32 weeks of intense training, 30 new troopers will report to one of the 52 patrol posts throughout the state. 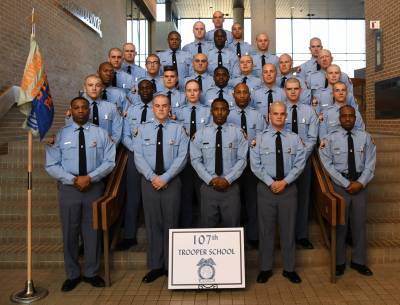 The Georgia State Patrol graduated its 107th Trooper School on Friday, January 10, at the Georgia Public Safety Training Center (GPSTC) in Forsyth.  After 32 weeks of intense training, 30 new troopers will report to one of the 52 patrol posts throughout the state. Governor Brian P. Kemp served as the keynote speaker and issued the Oath of Office.  Additionally, remarks were given by Colonel Mark W. McDonough, Commissioner of the Department of Public Safety and Capt. Joshua Lamb, Director of Training.

During remarks to his fellow class members, class president, Trooper Michael Fowler, reflected on how a diverse group of people put their differences aside and came together as one cohesive team. “A team who did the best they could to get to where they are today…Georgia State Troopers.”

Four of the graduates received special honors for top performance in various fields of study. The honorees were:

Trooper Thrift also received a $1,000 scholarship towards a bachelor’s degree in Criminal Justice from Reinhardt University for having the highest academic average (99) in his class.

Each commissioned trooper will report to the following assigned post: