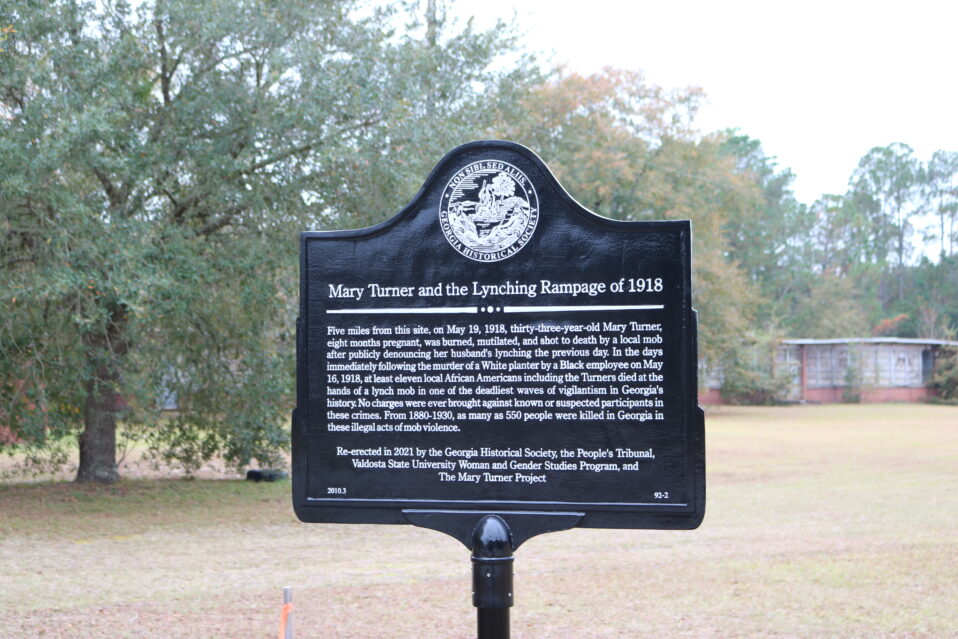 The Georgia Historical Society (GHS) recently announced the unveiling and rededication of a replacement Civil Rights Trail historical marker in Lowndes County recognizing Mary Turner and the Lynching Rampage of 1918.

The Marker was re-erected by GHS, The People’s Tribunal, Valdosta State University Woman and Gender Studies Program, and the Mary Turner Project.

“Like other historical markers across the state, the Mary Turner and the Lynching Rampage of 1918 historical marker creates a space where we can remember and discuss. We can stand on the ground where history happened and have a connection to the past,” said Elyse Butler.

Originally dedicated in 2010 at the site where the lynching took place, the marker was repeatedly vandalized, including being shot several times by gunfire. In 2020, vandals attempted to break the post, leaving large cracks in the marker base. The replacement marker is located five miles from the original site at Webb Miller Community Church, where it will be more readily and safely accessible to the public and help to better tell the story of Mary Turner and the events of 1918. The church is located at 300 Blakely Street in Hahira, Georgia.

“Coming to terms with your past is painful, but every society must eventually embrace the uncomfortable facets of its history. Without truth, there can be no forgiveness, no reconciliation, no healing, and no justice,” said Dr. Michael Noll. “This historical marker will facilitate conversations we have avoided for far too long, but conversations we must have to begin a healing process and to prevent racial injustices in our future.”

The Georgia Civil Rights Trail Initiative was established in 2015 as part of the ongoing work of the Georgia Historical Society’s Marker Program to recognize the rich diversity of our state’s past and focuses broadly on the economic, social, political, and cultural history of the Civil Rights Movement.

For further information about the Mary Turner and the Lynching Rampage of 1918 historical marker or the Georgia Civil Rights Trail Marker Program, please contact Patricia Meagher, GHS Director of Communications at 912.651.2125, ext. 153 or by email at pmeagher@georgiahistory.com.

The marker reads as follows:

Mary Turner and the Lynching Rampage of 1918

Five miles from this site on May 19, 1918, thirty-three-year-old Mary Turner, eight months pregnant, was burned, mutilated, and shot to death by a local mob after publicly denouncing her husband’s lynching the previous day. In the days immediately following the murder of a White planter by a Black employee on May 16, 1918, at least eleven local African Americans including the Turners died at the hands of a lynch mob in one of the deadliest waves of vigilantism in Georgia’s history. No charges were ever brought against known or suspected participants in these crimes. From 1880-1930, as many as 550 people were killed in Georgia in these illegal acts of mob violence.