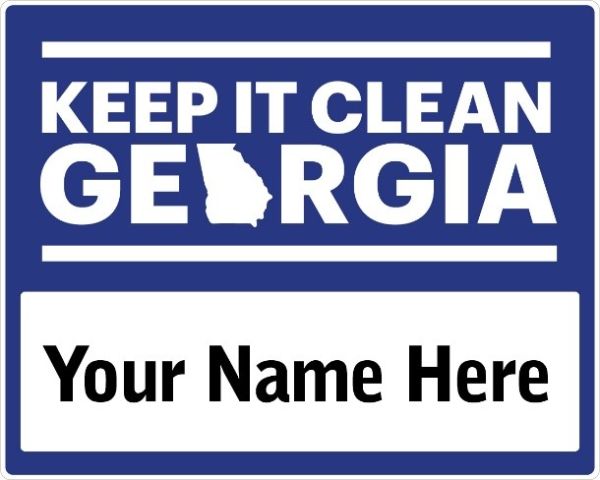 This week, the Georgia Department of Transportation (Georgia DOT) announced the next phase of its ongoing partnership with Adopt a Highway Maintenance Corporation® (AHMC), unveiling newly-designed road signs urging citizens across the state to “Keep It Clean Georgia.”

Following the launch of Keep It Clean Georgia in October 2020, Georgia DOT and AHMC began discussions around how to grow their existing partnership as a natural connection to the already-existing statewide Clean Georgia road campaign under the Georgia Sponsor A Highway® Program and the partners’ shared goal of expanding anti-littering efforts across Georgia. As a first step, Georgia DOT and AHMC collaborated on a co-branded social media campaign during the Summer of 2021, creating custom imagery and messaging aimed at maintaining a focus on Georgia’s natural beauty while also educating Georgians on important anti-littering practices that every Georgian can follow.

“From our initial introduction to Georgia DOT’s Keep It Clean Georgia campaign, we were not only impressed with the department’s overall commitment to fighting litter across the state, but also knew we wanted to be even more directly involved as we consistently see litter’s significant impact on the safety and appearance of state highways and interstates nationwide,” said Robert Davis, National Director of Sales and Marketing for AHMC. “In working closely with the Georgia DOT team on last year’s #GAAdoptsClean social campaign, we saw rebranding the existing Clean Georgia road signs with the Keep It Clean Georgia logo as the natural next step in not only expanding our working relationship, but also amplifying the mission of the campaign to reach all Georgians statewide.”

Through the existing Georgia Sponsor A Highway Program, AHMC facilitates everything from sponsor sign design and installation, to litter-removal services performed along highways. Highway sponsorship increases positive brand recognition for businesses within the community without requiring the sponsors to complete litter clean-up themselves. Instead, AHMC manages professionally-trained cleaning crews to conduct scheduled litter-removal services throughout the lifetime of the sponsor’s contract.

Each year, nearly $11.5 billion is spent on litter clean-up in the U.S. due in large part to the five pounds of trash the average American produces on a daily basis. In partnership with AHMC, the Georgia Sponsor A Highway Program provides a way to successfully offset litter-removal fees by allowing businesses statewide to step-in and fund litter-removal services along a sponsored stretch of highway.

“No matter where in Georgia you may call home, you’ve undoubtedly seen firsthand the impact litter has on our roadways, parks and the environment as a whole,” said Russell McMurry, P.E., Georgia DOT Commissioner. “The key to fighting and preventing litter lies in teamwork and education, which serve as the foundation for Georgia DOT’s Keep It Clean Georgia campaign. We are thrilled to continue the expansion of our partnership with the Adopt A Highway Maintenance Corporation in an effort to not only further the reach of Keep It Clean Georgia’s core mission, but also lead the way in helping keep our state litter-free.”

Originally launched in October 2020, the Keep It Clean Georgia campaign is a statewide initiative focused on preventing and eliminating litter by motivating Georgians and visitors of the Peach State to not only avoid littering in the first place, but also play an active role in protecting and maintaining the stunning views and rich landscapes that make Georgia the heart of the South. Rather than focusing campaign creative on showcasing images of litter strewn about roads and highways, Keep It Clean Georgia capitalizes on Georgians’ pride of place by highlighting the natural beauty of the state as a reminder of litter’s lasting impact on the environment from the mountains to the coast.

To learn more about Keep It Clean Georgia and the role you can play in helping eliminate litter statewide, visit www.KeepGAClean.com.

For more information on the Georgia Sponsor A Highway Program, visit www.adoptahighway.com/sponsor-markets/georgia/.