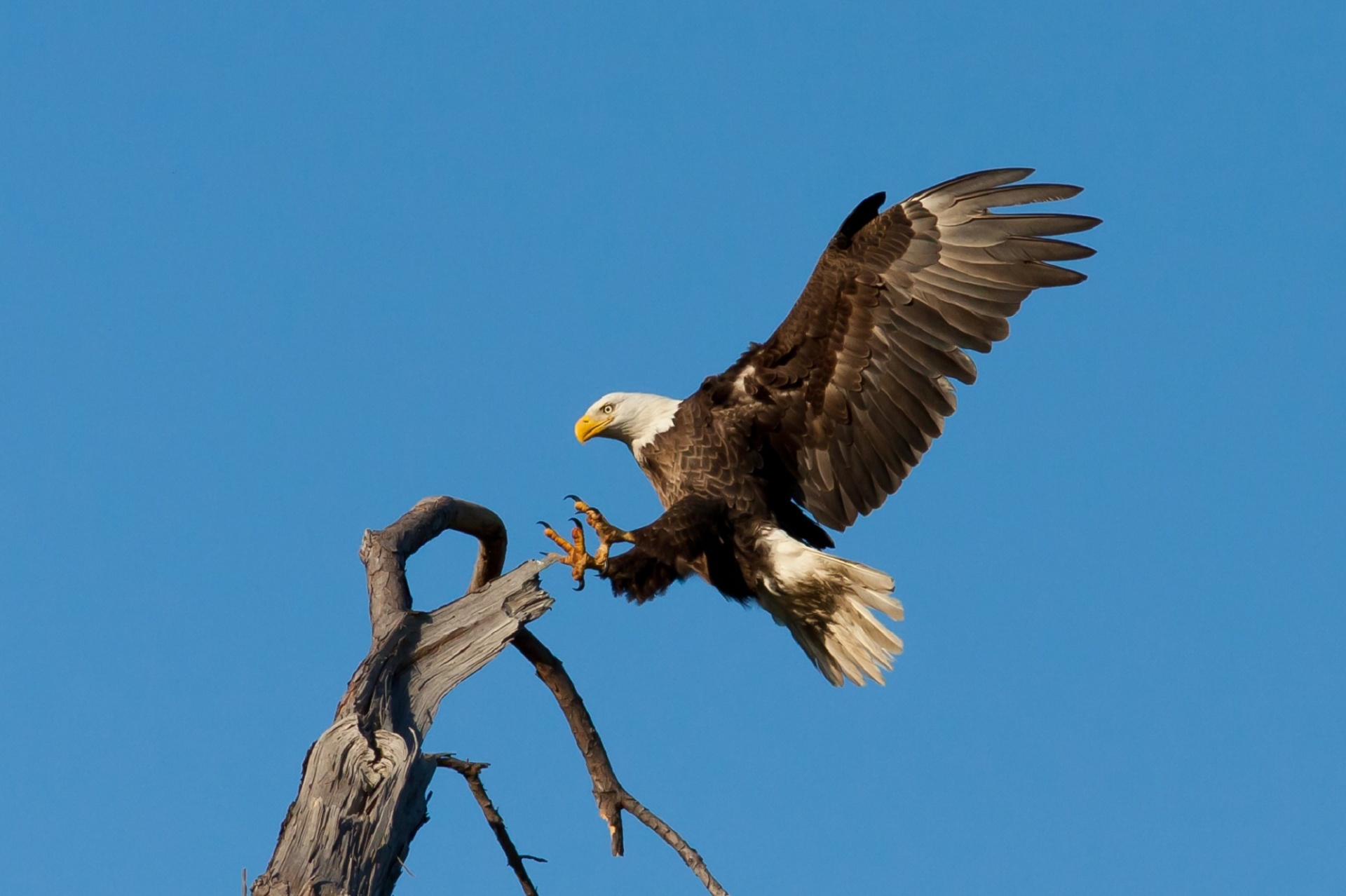 Bald eagle nesting remains strong in Georgia, but the number of successful nests and young fledged in the northern part of the state declined this year compared to long-term averages, according to an annual Georgia Department of Natural Resources survey. Substantial rainfall from January through March likely contributed to lower nest productivity in north Georgia, survey leader Dr. Bob Sargent said.

Checking by helicopter in January, March and early April, Sargent counted 117 eagle nest territories in three regions of the state: the six coastal counties; a section of east Georgia bounded roughly by interstates 16 and 85 and the South Carolina line; and the counties north of Atlanta. This year’s survey results also included seven nests monitored in other areas by volunteers or DNR staff.

Considering that the rest of south Georgia, surveyed in alternate years, usually has about 85 occupied nest territories—or active nests—Sargent said the state likely had 200 or more eagle nests for the sixth straight year.

The 2020 survey estimated 126 young fledged from 82 successful nests (those fledging at least one nestling). The rate of 1.5 fledglings per nest matched the long-term average. However, the percentage of successful nests and the number of young fledged per occupied nest territory were lower than average, especially in the northernmost counties—from Hall to Rabun, west to Dade, and south to Floyd and Bartow counties.

“More than half of the latter area’s 15 nests failed to fledge young, and nest territories in the eastern region of the state fledged fewer young than average, too,” said Sargent, a program manager with DNR’s Wildlife Conservation Section.

According to National Weather Service data, Atlanta, Augusta, Clayton, Dalton and some other north Georgia communities received up to twice the rainfall in January and February compared to 30-year averages. Totals remained above average well into March.

This three-month period coincides with the nesting peak for bald eagles in north Georgia. Excessive rain can postpone nesting and cause nest failures, with rising water levels reducing eagles’ ability to catch fish, their favored prey, according to Sargent. Abnormally wet weather combined with typical winter cold snaps often results in chilled eggs and eaglets, which can also increase the rate of nest failures.

Yet Sargent said he is not concerned about this season’s poor success rate for eagle nests in north Georgia, noting that the nests represent a small percentage of the state’s total.

“Populations of many wildlife species exhibit fluctuations in reproductive success from year to year, sometimes wildly so, and these fluctuations are often related to bad timing of unusually cold or rainy spells. By comparison, it is not a rare occurrence for the failure rate of songbird nests in some localities to exceed 50 percent due to weather factors.

DNR surveys bald eagle nesting to monitor the status of this state and federally protected species, which is a priority in Georgia’s State Wildlife Action Plan, a guiding strategy to conserve native animals, plants and habitats.

Largely because of the eagles’ sustained recovery, in 2018 Sargent switched from flying the entire state each year to checking coastal counties annually—they have the most nests and potential development impact issues—and alternating between checking nests in the Piedmont and mountain ecoregions in even years, and the rest of the Coastal Plain in odd years.

The change maintains standardized monitoring, syncs with the raptor’s range-wide comeback and mirrors slimmed-down eagle surveys in some neighboring states. It also frees money for other conservation projects. What the change doesn’t signal is that conserving eagles is less important, Sargent said.

By the end of this season, Sargent and DNR pilots Capt. Steve Turner and Lts. Jaye Bridwell and Robert Steht had peeked into nearly 170 bald eagle nests, from Walker to Camden County. About half of the nests were in the six coastal counties, home to at least 35 percent of the state’s active nests.

Sargent calls the pilots “eagle study teammates.” In addition to flying the aircraft safely, “They sometimes find nests before I do, are as fascinated by the big birds as I am and are especially conscientious about keeping a safe distance from the nests – for the sake of the eagles – while giving me the best possible look at the contents.”

Many factors have fueled the bald eagle’s recovery: a U.S. ban on DDT use in 1972, habitat improvements after enactment of the federal Clean Water and Clean Air acts, protection through the Endangered Species Act, increased public awareness, restoration of local populations through release programs, and forest regrowth.

Yet while on the rebound, eagles still face threats. They vary from avian vacuolar myelinopathy, a disease primarily affecting coots and the eagles that prey on them, to poisoning via consumption of rodenticides, being hit by cars and being shot by people.

DNR’s Wildlife Conservation Section monitors eagle nesting through aerial surveys in January and again in spring. The initial flights are focused on finding active nests: those with eggs, eaglets, an adult in an incubating posture or evidence that eagles have been prepping the nest for use. The second round of surveys is aimed at determining the reproductive outcome of those nests and checking recent reports of new nests.

The public is encouraged to report eagle nests via georgiawildlife.com/bald-eagle, (478) 994-1438 or bob.sargent@dnr.ga.gov. One tip: Osprey nests are sometimes confused with eagles’. If unsure, check out the nesting details in the profiles for both species at.

DNR works with landowners to help protect bald eagle nests on private property. Although de-listed from the federal Endangered Species Act in 2007, eagles are protected by the Bald and Golden Eagle Protection Act, the Migratory Bird Treaty Act, and state law. In Georgia, the species is state-listed as threatened.

The Wildlife Conservation Section’s mission is to conserve eagles and other Georgia wildlife not legally fished for or hunted, as well as rare plants and natural habitats. The agency depends primarily on fundraisers, grants and contributions to the Georgia Nongame Wildlife Conservation Fund. That makes public support critical.

Georgians can help by buying a DNR eagle or new monarch butterfly license plate, as well as annually renewing their older eagle or hummingbird tags. Most of the fees to buy or renew these plates are dedicated to wildlife.