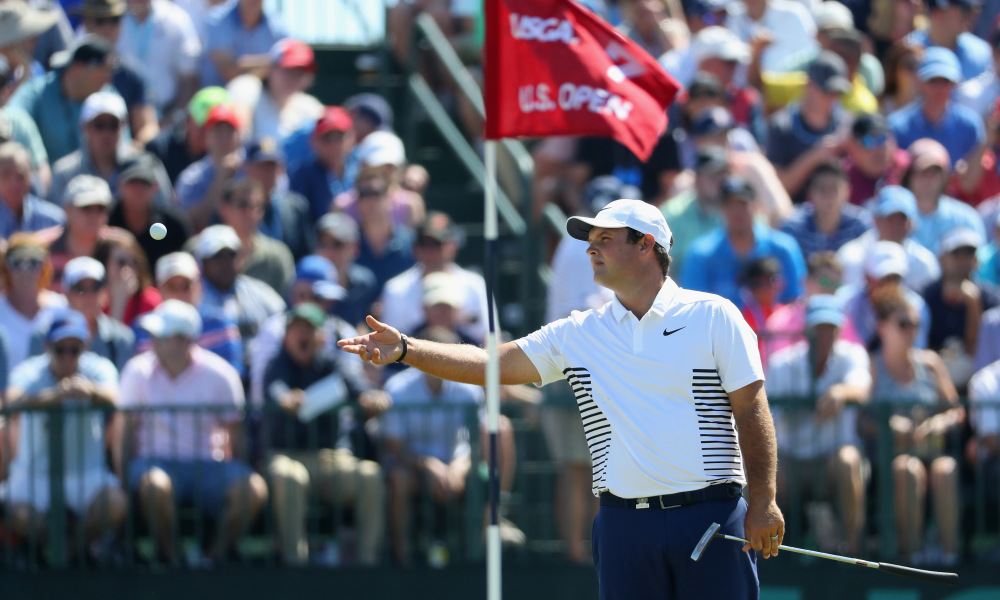 Patrick Reed went into the U.S. Open at Shinnecock Hills as the only player with a chance to complete golf’s Grand Slam this year.

That’ obviously because Reed won the Masters tournament at Augusta National Golf Club back in April to claim the first major championship in this professional season.

Reed didn’t hoist the U.S. Open trophy at the end of a controversy-filled week at the United States Golf Association’s premier event in Southampton, N.Y., but the Masters winner made a good go of it Sunday afternoon in the final round.

Starting out three strokes back of the four co-leaders, Reed started fast in the final round to immediately put himself squarely in the championship discussion. He birdied each of the first three holes to grab a share of the lead momentarily.

He would actually birdie five of the first seven holes. Reed faltered, however, in the middle of the round with three bogeys in a four-hole stretch from Nos. 9-12 before finishing with a bogey on the last.

Those hiccups were enough to prevent him from keeping pace with Brooks Koepka who won the national championship a second straight time.

Reed settled for a 2-under-par 68 in the final round and wound up fourth overall with a 4-over total over the four days of play on the hard and fast Shinnecock course which was deemed unplayable in Saturday’s third round by many of the world’s top players.

Reed said he really wasn’t thinking about completing the second leg of the Grand Slam when he teed off on Sunday.

“Of course, the Grand Slam would have been nice. But you know, I mean honestly, to me, that was really the last thing on my mind,” Reed said. “It was go out, play some solid golf, try to post a number and see if you can get the job done. I had a chance. I definitely had a chance.”

Remember, Reed was not a popular champion following his triumph at Augusta back in the spring. Some golf fans have him pegged as an overconfident renegade despite his stellar and passionate play in the Ryder Cup while representing the United States.

Reed has a shady past that includes him being kicked off the University of Georgia golf team after accusations of cheating in team practice rounds and stealing from teammates.

He transferred to Augusta State where he helped the team to a pair of NCAA championships before embarking on his professional career.

After one of his recent victories on the PGA Tour, Reed called himself one of the world’s top-5 players which rubbed some the wrong way because he didn’t exactly have the credentials to back that up.

He has certainly backed up that proclamation with his results in the last three majors, though.

Reed finished second at the 2017 PGA Championship before winning at Augusta and then finishing in the top-5 this past week at Shinnecock.

That’s something he’s certainly proud of.

“To finish in the top-10 my last three majors, and to have a chance to really win all three of them and to close one off, it means a lot,” he said.

Reed has now finished in the top-15 in three of his last four U.S. Open appearances.

Right now, there’s no reason to believe he won’t be a factor at next month’s British Open at Carnoustie and the PGA at Bellerive in August.

This is also a Ryder Cup year, and he figures to be one of the premier players on the American side in the matches against the Europeans.

While others griped and moaned about the USGA’s setup of the Shinnecock course on the weekend, Reed kept his head down and continued to grind all the way until the end.

He knew from watching the early coverage of the final round on television, a low number was out there and he made the decision to be aggressive from the start.

“I knew I had to [have] a hot start,” Reed said. “Watching those early scores today and watching the live coverage, it seemed like the greens were really receptive. So I knew that in the beginning part of the round, you had to attack and I had to put as much pressure as I could on the leaders and I was able to do that. I felt like I really didn’t miss a golf shot through the first 11 holes.”

Reed was trying to join a short list of players to win both the Masters and the U.S. Open in the same year. That list currently includes only Craig Wood, Ben Hogan, Arnold Palmer, Jack Nicklaus, Tiger Woods and Jordan Speith.

Bobby Jones is the only player to complete the Grand Slam in the same season.

Reed gets an A for his effort this week and he definitely gave himself a shot at winning a second major title with a fast Sunday start.

He finished at Augusta, but didn’t at Shinnecock.

“I had a chance. I definitely had a chance,” Reed said. “Just too many missed putts, and at the end of the day, just needed to hit the ball a little closer.”

Column: Pulling out some prep notes from the reporter’s notebook
Brunswick native has enjoyed successful career in athletic training
Posting....