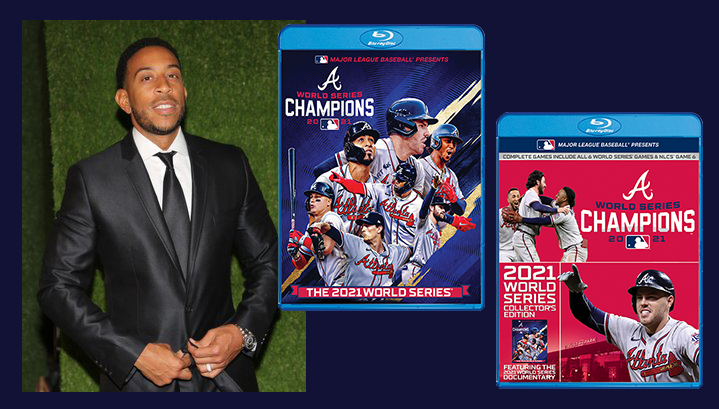 Atlanta native and Grammy winning recording artist Ludacris is the narrator for the official 2021 World Series film from MLB. The two-disc blu-ray+DVD combo pack, DVD and digital rental will be available Tuesday, December 14. Early access to digital downloads for purchase begins today, November 30. “The 2021 world series collector’s edition: The Atlanta Braves” an 8-disc complete game set on blu-ray will be available for Braves Country on December 14.

For Hank Aaron. For Phil Niekro. For Braves Country. The Atlanta Braves are 2021 World Series Champions, proving that it is anyone’s game once the Postseason begins. On December 14, Braves Country will have the opportunity to relive all the exhilarating drama and unforgettable moments with “THE 2021 WORLD SERIES,” the official 2021 World Series Film from Major League Baseball.

Narrated by Braves fan and multiple Grammy Award®-winner Chris “Ludacris” Bridges, the pulse-pounding film will be available everywhere on December 14, 2021 on a two-disc Blu-ray+DVD combo pack and DVD from Shout! Factory and Major League Baseball. It will also be available for purchase on all major digital platforms two weeks earlier on November 30.

When the Braves capped their championship run with a 7-0 victory over the Astros in Game 6, they completed one of the most spectacular late-season surges in baseball history. Halfway through the regular season, the team had a losing record and were dealt a season-ending injury to superstar and NL MVP candidate, Ronald Acuña Jr., so General Manager Alex Anthopoulos deftly traded for Joc Pederson, Jorge Soler, Adam Duvall, and Eddie Rosario, changing the course of the season in undeniable ways. Braves lifer and Manager Brian Snitker now had his crew, and the Braves caught fire with a 36-19 (.655) finish to claim the NL East Division championship. They then beat the Milwaukee Brewers in the NLDS and dethroned the Los Angeles Dodgers in the NLCS to set the matchup with the Astros, a franchise playing in the World Series for the third time in five years.

A singular souvenir from baseball’s biggest stage, the official World Series Film is an annual tradition that dates back to 1943 when the U.S. State Department commissioned Major League Baseball to produce a recap of the World Series for troops overseas. Expertly crafted, “THE 2021 WORLD SERIES” is edited together from hundreds of hours of original, cinematic hi-def game footage delivering the Braves World Series run in incredible fashion. Aside from the official film, comprehensive bonus features include the featurette, “How They Got There”, a compilation of 2021 walk-offs, clinching moments and exclusive footage from the World Series parade, a raucous celebration dedicated to Braves legend Hank Aaron.

Die-hard fans will also be able to relive the team’s entire Fall Classic from the first pitch to the last out with the “2021 WORLD SERIES COLLECTOR’S EDITION: ATLANTA BRAVES”, an 8-disc Blu-ray set available on December 14 that includes the official film, all six complete games of the Fall Classic, and a bonus disc including the clinching NLCS Game 6 vs. the Dodgers. The perfect gift for any proud member of Braves Country, this special edition includes SleeveStats inserts, which offer official stats and game trivia to enhance the viewing experience. Each game includes four audio options, allowing home audiences to watch the games while listening to the television broadcast, the Atlanta Braves Radio Network, or a Spanish-language version of the broadcasts.