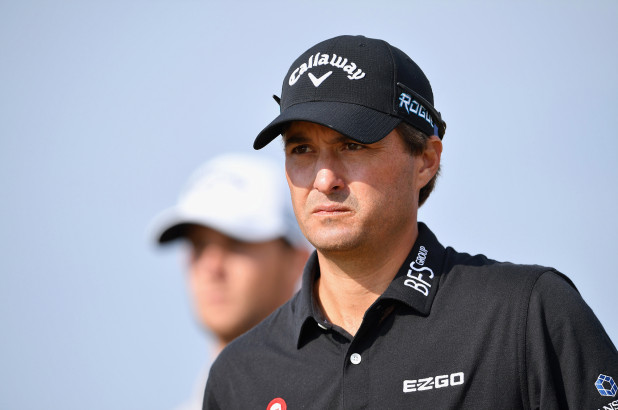 Francesco Molinari walked away with the Claret Jug Sunday that goes to the British Open winner.

But over the first three days of the tournament, it looked like someone with Georgia ties might bring home the coveted trophy.

And the guy with the best chance was Kevin Kisner, the former standout player for the University of Georgia men’s golf team.

Kisner either held or shared the lead after each of the first three rounds and was tied atop the leaderboard with defending champion Jordan Spieth and fellow American Xander Schauffele going into the final round.

The three were all at 9-under-par 204 on the tough Carnoustie course in Scotland, but all three guys settled for an above-par score on Sunday.

Kisner and Schauffele both shot 3-over 74 on the par-71 layout. Spieth was two strokes worse, coming in with a 76 final tally.

Kisner’s bid for his first major championship took a hit as he stumbled out of the gate on a day where the wind picked up and led to more bogeys from the top to the bottom of the scoreboard. Kisner made a bogey and a double-bogey in his first three holes and posted a 40 on the outward nine.

Kisner, who makes his home in Aiken, S.C., found a bunker off the tee on the par-4 second hole and left the green with a 6. He then missed a 4-foot par putt on the third hole.

He did make a birdie on the par-5 sixth but then finished the front side bogey-bogey-par.

Kisner steadied himself on the inward nine with a pair of birdies and one additional bogey, but he came up two strokes short of the lead, finishing in a four-way tie for second at 6-under with major winners Justin Rose, Rory McElroy and Schauffele.

Kisner also held the 54-hole lead last year at the PGA Championship and finished tied for seventh. That had been his best finish in a major until his showing this week at Carnoustie.

He is scheduled to play in the RBC Canadian Open this week and the World Golf Championships-Bridgestone Invitational in two weeks.

The PGA Championship is scheduled for the following week.

Kisner is a two-time winner on the PGA Tour. He won the 2015 RSM Classic at Sea Island and the Forth Worth Invitational last spring.

Kisner was a member of Georgia’s 2005 national championship team. He also was an All-American player for the Bulldogs.

Fellow Golden Isles resident and former Open champion Zach Johnson tied for 17th after going to the weekend battling with the leaders.