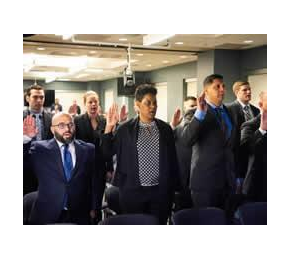 “We are grateful and blessed to have these exceptional individuals join HSI to help execute one of the most important missions; the pursuit and arrest of child predators and the rescue of victims of these terrible acts,” Erichs emphasized.

Last week’s twelve HSI HERO graduates represent the tenth graduating class of this program. Each of them have successfully completed the initial three-month training in computer forensics and law enforcement support, and will now transition to ICE field offices across the nation to begin their hands-on experience.

“Investigating child sexual exploitation is one of the hardest, yet most rewarding missions [one] can undertake for this agency,” Erichs told the HERO graduates and their supporters. “Make no mistake – you are joining a team here at HSI that is working around-the-clock to rescue innocence and bring evil to justice.”

Erichs told attendees that even one child victim is one too many.

“Unfortunately, crimes against children occur every hour of every day,” she added. “Innocent children who deserve a happy home and safe community in which to simply be a kid, are victimized and have their lives forever changed.”