A man wanted for a double homicide in Arkansas has reportedly been spotted in Georgia. 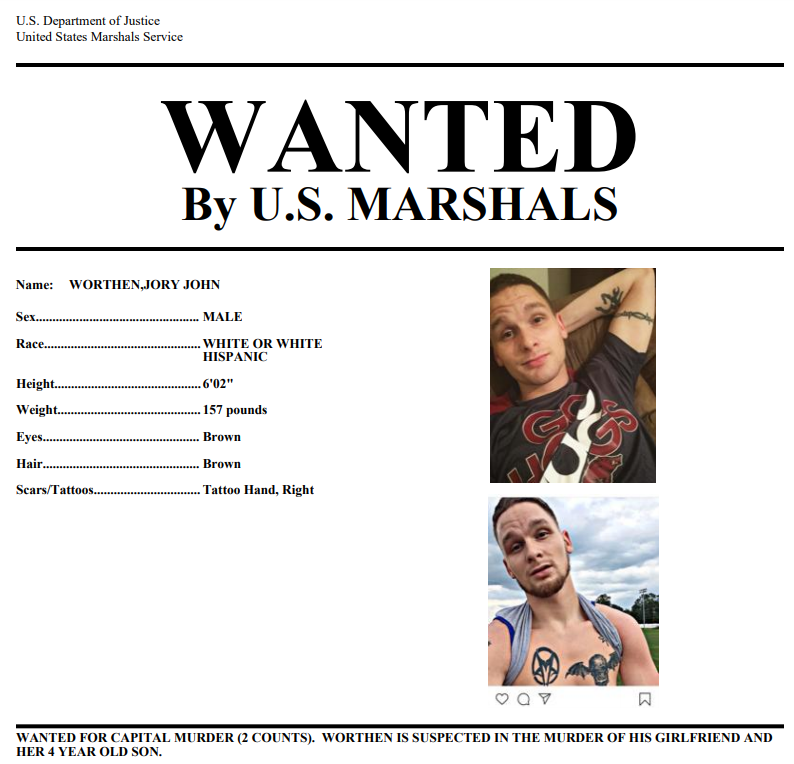 A man wanted for a double homicide in Arkansas has reportedly been spotted in Georgia.

Jory Worthen has been on the run for four months and authorities say he is wanted in relation to the deaths of his girlfriend – 20-year-old Alyssa Cannon – and her four-year-old-son, Braydon Ponder. Both were found dead at their residence in June. This week, Worthen was spotted at a gas station in Georgia.

The Gonzalez Bonding Company shared Worthen’s photos Monday, noting a $5,000 reward for information that leads to his capture. The bond company says Worthen was reportedly

seen in Sylvester, Ga at a gas station, believed to be wearing dark jeans, a black T-shirt and a blue ball cap at the time. The post by GBC also states that Worthen was clean shaven and had longer dark-colored hair. He was with a black male who was driving a late model red Camaro.

Worthen has been sought by the U.S. Marshals Service, which has labeled Worthen armed and dangerous. Anyone who sees him is asked to call 911 or the U.S. Marshals Tip Line at 1-800-336-0102. You can also submit tips confidentially online at their website, usmarshals.gov/tips.


An update from the owner of the bonding company was posted Tuesday evening: