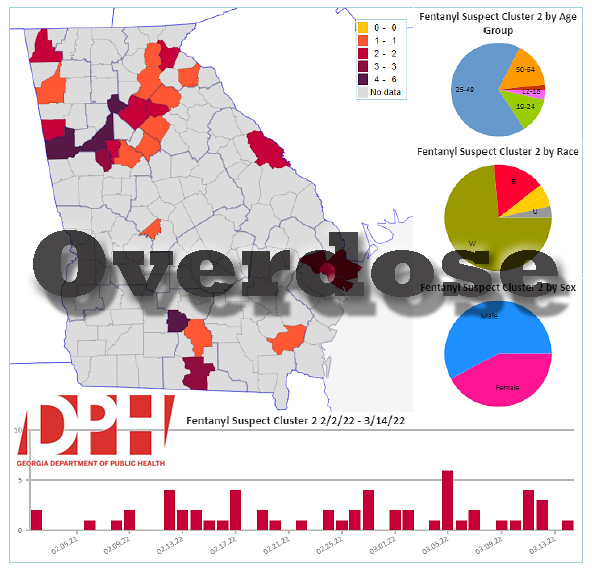 The Georgia Department of Public Health (DPH) Drug Surveillance Unit has received increased reports of overdoses due to drugs mixed with fentanyl, particularly cocaine, methamphetamine, and counterfeit pills. Overdoses have been reported in several areas of the state over the past month.

Between early February and mid-March, at least 66 emergency department visits involved the use of cocaine, methamphetamine, crack, heroin, pain killers and cannabis products that were likely laced with fentanyl. Patients described extreme reactions to drugs – one patient reported taking a Percocet and went unresponsive – or patients were seen for a stimulant overdose but had a positive response to naloxone. Naloxone is administered to reverse the effects of opioid overdoses. 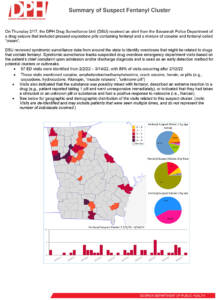 Fentanyl is a deadly substance that can be made illegally and found in all types of street drugs, not just opioids. It is important to know that it is possible to have an opioid overdose from a stimulant (e.g., cocaine) that is laced with fentanyl.

Symptoms of an opioid overdose include:

Drugs that contain fentanyl cannot be detected by sight or smell, and even a small amount can cause an overdose. If you have a drug that was not prescribed for you, be aware it could contain fentanyl.

Fentanyl-related overdose deaths have been increasing in Georgia since the start of the COVID-19 pandemic. Between May 1, 2020 and April 30, 2021, fentanyl-involved overdose deaths increased 106.2% compared to the same time period the previous year.

If you suspect a drug overdose, call 911 immediately, provide the location of the overdose and stay with the individual until help arrives. Georgia has a medical amnesty law that protects individuals who may be experiencing an overdose and callers seeking medical attention for drug overdoses. Naloxone reverses the effects of an opioid overdose and can be obtained from pharmacies in Georgia without a prescription under a standing order from the Commissioner.


Drug prevention and recovery are possible with the appropriate support. For access to services and immediate crisis help, the Georgia Crisis & Access Line 1-800-715-4225 is available 24/7. 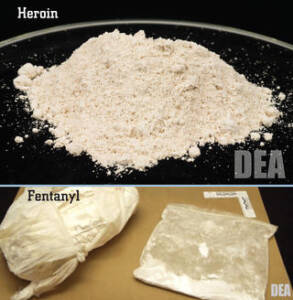