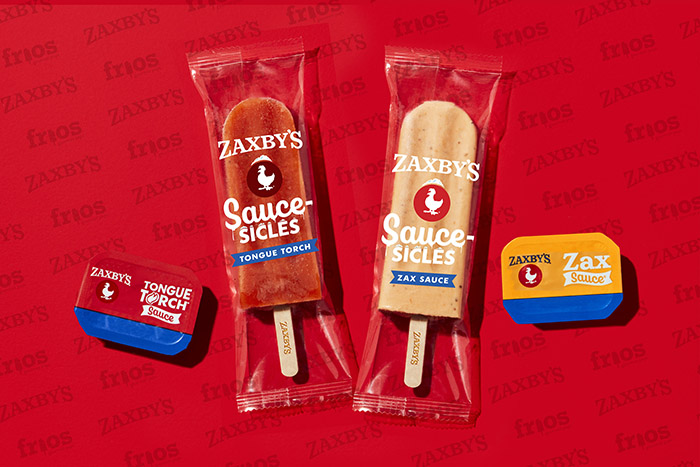 “Saucesicles were created for our most loyal fans that can’t get enough of our signature sauces. The collaboration with Frios is built on flavor, bringing together two iconic Southern brands,” said Patrick Schwing, chief marketing and strategy officer at Zaxby’s.

The Saucesicles come in two flavors: Zax Sauce and Tongue Torch. The Zax Sauce-flavored Saucesicle features all the sweet and tangy and creamy flavors created by the secret blend of spices, black pepper and Worcestershire Sauce. The Tongue Torch Saucesicle is a mild heat tomato pop with notes of garlic, paprika, turmeric and a hint of lime.

Zaxby’s has renamed the month of September ‘Saucetember’ to highlight the brand’s proprietary portfolio of 12 dipping and tossing sauces. Zaxby’s is celebrating ‘Saucetember’ by treating its loyal fan base to this saucy goodness on a stick.

Saucesicles come in packs of eight and are limited to one order per person. States excluded from shipping include Alaska, California, Hawaii, Montana, Nevada, Oregon, Puerto Rico and Washington.

For fans who might miss out on the spicy-saucy treat, Zaxby’s will also offer a Buy-One-Get-One-Half-Off (BOGOHO) Boneless Wings Meal Deal with wings tossed in one of Zaxby’s eight sauces, when ordering through the app on September 27.

“Partnering with Zaxby’s on this one-of-a-kind project has been a fantastic opportunity, bringing to life Zaxby’s unique idea for a new offering of their sauces,” Cliff Kennedy, CEO and founder of Frios added.

Founded in 1990, Zaxby’s is committed to serving delicious chicken fingers, wings, sandwiches and salads with Southern hospitality and a modern twist. For the second year in a row, Zaxby’s iconic Signature Sandwich has won Thrillist’s 2022 Fasties Award for Best Fried Chicken Sandwich. Zaxby’s has grown to more than 900 locations in 17 states and is headquartered in Athens, Georgia. For more information, visit zaxbys.com or zaxbysfranchising.com.