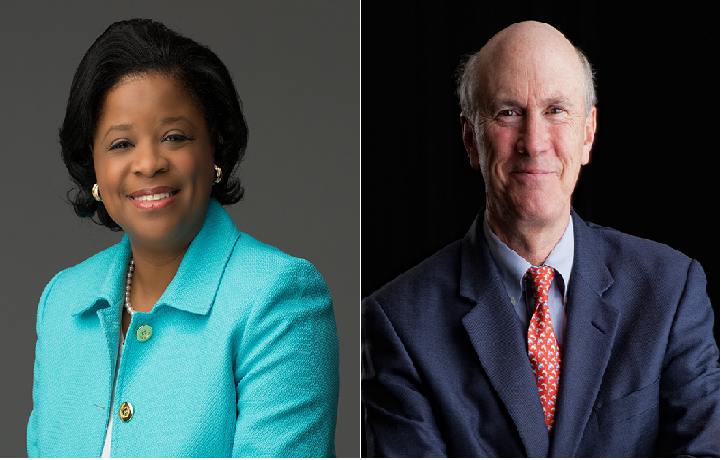 The Georgia Historical Society announced this week that Shan Cooper and Frank Blake have been elected to serve as the newest members of the GHS Board of Curators.

“The Leadership of the GHS Board of Curators is vital to the success of the Society’s mission,” said Dr. W. Todd Groce, President and CEO of the Georgia Historical Society. “We are excited to have Shan Cooper and Frank Blake join this team of talented and dynamic leaders and know that the mission of the Georgia Historical Society will benefit greatly from their service.”

Shan Cooper is the Executive Director for the Atlanta Committee for Progress, which provides leadership on key issues important to economic growth and inclusion for the citizens of Atlanta. She is the former Chief Transformation Officer of WestRock in Norcross and former Vice President and General Manager of Lockheed Martin Aeronautics Company in Marietta.

Shan was named one of Black Enterprise magazine’s Most Powerful Executives in Corporate America in 2017, the Most Respected Business Leader by Georgia Trend in 2015, and one of the 2015 Women of the Year by American Association of University Women.

She earned a bachelor’s degree in biology and religion from Emory University and an MBA from the Roberto Gouizueta Business School at Emory University. She is also a graduate of the Rutgers University Executive Masters in Global Human Resource Leadership Program.

Frank Blake served as Chairman and CEO of The Home Depot from January 2007 through November 2014, and then as chairman through January 2015. Frank joined The Home Depot in 2002 as executive vice president, Business Development and Corporate Operations.

The Boston native previously served as Deputy Secretary for the U.S. Department of Energy and in a variety of executive roles at General Electric, including Senior Vice President, Corporate Business Development.

He serves on the Board of Directors for the Georgia Aquarium, Proctor & Gamble, Macy’s, and is currently serving as Chairman of the Delta Air Lines and Grady Hospital boards. Additionally, he sits on the Board of Trustees at Agnes Scott College. He holds a bachelor’s degree from Harvard University and a jurisprudence degree from Columbia University School of Law.