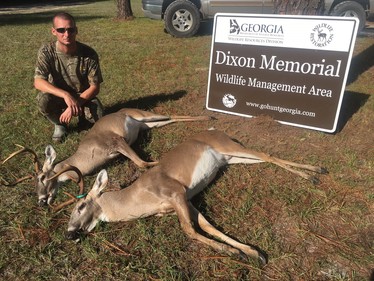 Last year, almost 30,000 hunters took to the woods with muzzleloaders, bringing in more than 6,000 deer, according to the Georgia Department of Natural Resources’ Wildlife Resources Division (WRD).

“Fall is here and it’s time to zero in your muzzleloader, because primitive weapons season is just around the corner,” said Charlie Killmaster, state deer biologist with the WRD Game Management Section. “So few hunters take advantage of hunting with muzzleloaders compared to firearms, but it is like the calm before the storm. And, If you do head to the woods during this week-long season, be sure to take a kid hunting with you, and remember they can use any modern rifle during the primitive weapons season.”

Over one million acres of public hunting land is available to hunters in Georgia, including more than 100 state-operated wildlife management areas.  Many areas offer special hunts throughout the season, including primitive weapons hunts. Dates and locations for hunts are available in the 2020–2021 Georgia Hunting Seasons and Regulations guide.

Youth, under 16 years of age, may hunt deer with any legal deer firearm during Primitive Weapons Season, including during any wildlife management area primitive weapons hunts.

During the primitive weapons season, hunters may use archery equipment, muzzleloading shotguns (20 gauge and larger) and muzzleloading firearms (.44 caliber or larger).

The season bag limit is 10 antlerless deer and two antlered deer (one of the antlered deer must have at least four points, one inch or longer, on one side of the antlers). Special regulations apply to archery-only counties and extended archery season areas.

All deer hunters, including archers, are required to wear a minimum of 500 square inches of daylight fluorescent orange above the waist during primitive weapons season. Scopes and other optical sighting devices are legal for muzzleloading firearms and archery equipment.

To pursue deer in Georgia, hunters must have a valid hunting license, a big game license and a current deer harvest record (available in the Outdoors GA app or as a paper copy print-able from your license account). Licenses can be purchased online at www.GoOutdoorsGeorgia.com, by phone at 1-800-366-2661, or at a license agent (list of agents available online).

Once you harvest a deer, you must report it within 24 hours through Georgia Game Check. Deer can be checked on the Outdoors GA app (useable with or without cell service), or by calling 1-800-366-2661.