The charity Bush chose to receive the $5,000 was the Peace Officers’ Association of Georgia (POAG). 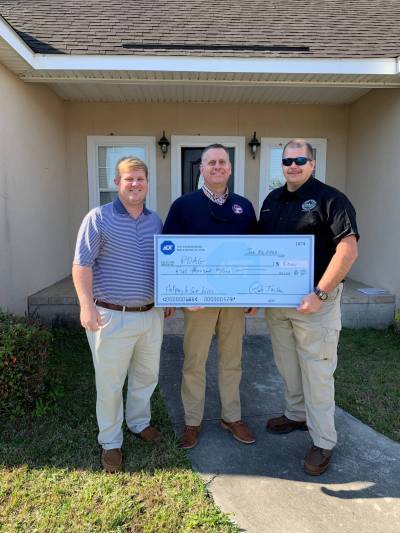 Last week, alarm company ADT recognized the quick action of Homeland Security Coordinator Sidney Bush of GEMA/HS by donating $5,000 in his name to a charity of his choice.

Bush was off-duty in his home when he heard an alarm go off and his neighbor, Nakita Foreman, scream.

“She ran over and just said, ‘my house is on fire,’” said Bush. “I ran inside and grabbed the first thing I could find, which was a plastic Cascade bucket under the sink. I dumped it out and started using it to put water on the fire.”

The fire occurred after lit candles in the bedroom were left unattended. Thanks to Bush and an ADT dispatcher who called the Glynn County Fire Department after receiving an alarm from the smoke detector, the damage to the home was minimal.

The charity Bush chose to receive the $5,000 was the Peace Officers’ Association of Georgia (POAG). POAG is a nonprofit dedicated to supporting police officers. The donation was accepted Monday on behalf of the organization by POAG president and Georgia Department of Natural Resources Law Enforcement Division Captain Chris Hodge and POAG Legislative Liaison and GEMA/HS Deputy Director Harlan Proveaux. Proveaux said that GEMA/HS is proud to have Bush as an employee.

In addition to donating to POAG, ADT also donated $5,000 to the Glynn County Fire Department for their quick response. Foreman and her husband, Jeremy, expressed their gratitude to everyone involved.

As part of the Office of the Governor, GEMA/HS works with local, state and federal governments, in partnership with the private sector and faith-based community, to protect life and property against man-made and natural emergencies. In addition, GEMA/HS employees are on 24-hour call statewide to assist local authorities when disaster strikes.