One property secures critical habitat for the restoration of rare species, including one of the state’s rarest plants, hairy rattleweed, and Georgia’s state reptile, the gopher tortoise. The other tract will be part of Moody Forest Wildlife Management Area and help protect key wildlife habitats along the Altamaha River. 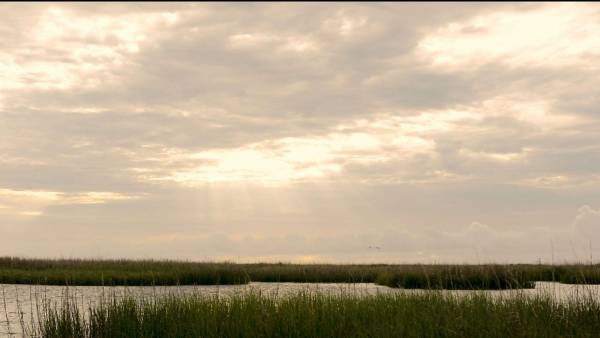 Two significant land acquisitions in southeast Georgia were announced this week by the Georgia Department of Natural Resources (DNR) and the Open Space Institute (OSI). One property secures critical habitat for the restoration of rare species, including one of the state’s rarest plants, hairy rattleweed, and Georgia’s state reptile, the gopher tortoise. The other tract will be part of Moody Forest Wildlife Management Area and help protect key wildlife habitats along the Altamaha River.

Totaling approximately 1,933 acres, the properties consist of the 1,666-acre Hairy Rattleweed Protection Tract in Wayne and Brantley counties, and the 267-acre Altamaha River Forestland Protection Property in Appling County. The former has the largest documented population of hairy rattleweed, federally listed as endangered and known to exist worldwide only in these two Georgia counties. The latter adds to Moody Forest, contributing to a 183,500-acre corridor of conservation lands along the Altamaha.

Both tracts are longstanding priority acquisitions of Georgia DNR. The agency is working to make them available for public recreation such as hunting, fishing, birding and hiking, with plans to open sometime in 2020.

“This conservation project not only protects the hairy rattleweed, a globally unique plant found only in coastal Georgia, but also creates new local public access to the outdoors,” said Kim Elliman, president and CEO of OSI. “OSI is proud to have contributed to the protection of these significant properties, and we thank our partners the Georgia Department of Natural Resources, the Knobloch Family Foundation, and Rayonier for their tireless efforts to protect the state’s natural resources.”

The Wildlife Action Plan is a statewide strategy to conserve populations of native wildlife species and the natural habitats they need before these animals, plants, and places become rarer and more costly to conserve or restore.

“These are great examples of working forests where timber management and environmental stewardship work together,” said Rhett Rogers, Rayonier Vice President of Portfolio Management. “We are proud of our history of collaboration with Georgia DNR and delighted to work again with them and OSI to protect these unique assets.”

The properties were conserved by OSI and DNR with the support of the Knobloch Family Foundation and the U.S. Fish and Wildlife Service. OSI purchased the tracts from Rayonier, a timberland real estate investment trust (REIT) that for more than a decade has managed the Hairy Rattleweed Protection Tract to ensure protection of hairy rattleweed and gopher tortoises.

Donald Imm, Georgia Ecological Services Field Supervisor for the Fish and Wildlife Service, called the acquisition of the rattleweed tract “a huge step” toward the eventual recovery of the “highly endemic and federally protected plant, as well as a significant acquisition for other at-risk species associated with the longleaf pine ecosystem in the area.” “The service is thankful to all of the partners that allowed this and other conservation efforts to succeed,” Imm said.

Endemic to longleaf pine ecosystems and named for the cobweb-like hairs that cover its stems, hairy rattleweed is a critically imperiled species that has shown significant population declines over the last 30 years. The former Rayonier property is considered a high-quality site for conservation because of its dense populations of hairy rattleweed and diverse native groundcover. DNR management including prescribed fire and timber thinning is planned to restore native longleaf-wiregrass communities and provide even more habitat for the plant. The property also has extensive wetlands, including a type that is declining nationally, plus habitat for the federally listed eastern indigo snake and value as a tract that could help link other south Georgia concentrations of conservation lands.

Gopher tortoises are considered a keystone species because they dig burrows that provide shelter for approximately 350 other species, including eastern indigos. Georgia’s only native tortoise also is a focus of the Gopher Tortoise Conservation Initiative. This Georgia-based private-public partnership is working to conserve gopher tortoises and their habitats, and hopefully help prevent listing of the species under the Endangered Species Act in the eastern part of its range. The Hairy Rattleweed Protection Tract will contribute directly to these goals by protecting tortoises that already live on the property and restoring habitat for potential additional populations.

The Moody Forest addition, located along the Altamaha near Baxley, contributes to one of the most significant river corridor conservation projects in the country. Participants include private landowners, conservation organizations, state and federal agencies, and the military.

The largest free-flowing river on the East Coast, the Altamaha flows 137 miles across southeast Georgia to the Atlantic Ocean, meandering through longleaf pine forests and cypress swamps and feeding into saltwater estuaries. Formed by the confluence of the Ocmulgee and Oconee rivers, the Altamaha drains about one quarter of the state of Georgia.