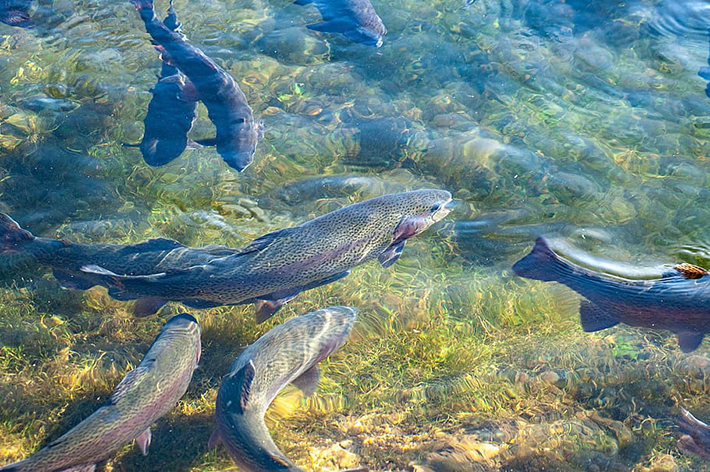 Initial testing results indicate that both hatcheries are positive for WHD and IHNV.

“While neither WHD or IHNV are harmful to humans, these diseases can cause high trout mortalities in hatchery systems and in the wild, and there are no known therapeutic treatments to eliminate these pathogens,” said WRD Chief of Fisheries Scott Robinson. “As a result, Georgia WRD has temporarily suspended its trout stocking program and is in the process of collecting additional trout samples for disease analysis, investigating the source for both pathogens, and identifying disinfectant methodologies for treating the hatcheries.”

Whirling Disease: This is the first documented occurrence of whirling disease in Georgia. First detected in the U.S. in 1958, this disease is found in more than 20 states, including the Watauga River in North Carolina in 2015. Whirling disease can cause 90 percent or greater mortality of young rainbow trout and can have serious impacts to wild and hatchery trout populations. The disease is caused by the microscopic parasite Myxobolus cerebralis, which damages cartilage and skeletal tissue in trout causing diseased fish to swim in a “whirling” motion.

Infectious Hematopoietic Necrosis Virus (IHNV): While IHNV has not previously been found in Georgia, it has been documented in salmonids in the Pacific Northwest. The disease is caused by the Salmonid Novirhabdovirus and is passed through contact with urine, mucus, and other fluids. All species of trout are susceptible. The virus can cause high trout mortalities in hatchery systems and in the wild. There are no therapeutic treatments to eliminate the pathogen. Infected fish may exhibit lethargy, whirling behavior, darkened coloration, and swelling in the head and abdomen.

If you catch a trout that you think may be affected by WHD or IHNV, here are ways to help:

More information about fish disease in Georgia can be found at: https://georgiawildlife.com/ans#diseases.