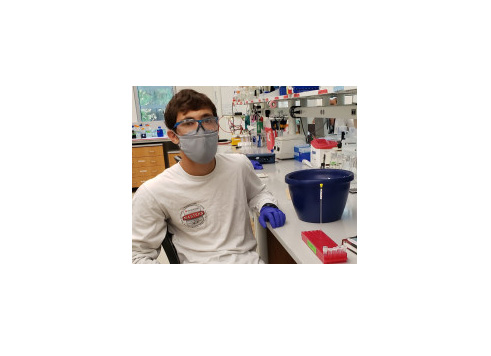 Stephen Litt, a junior enrolled in the Kennesaw Mountain High School Academy of Mathematics, Science and Technology (Magnet program), virtually exhibited his updated, Phase VI research, at the Cobb-Paulding Science Fair and the Georgia State Science Fair where he earned First Honors recognition. The student’s research made national headlines four years ago when he proved that cancerous tumors could be prevented in planarian worms exposed to the green tea antioxidant, EGCG. Now, his research has progressed to the molecular level.

Last year, Phase V of the research elucidated the mechanism by which EGCG may be functioning. Using advanced techniques and instrumentation, Litt identified the portion of the EGCG molecule that binds to a specific protein. Litt has now advanced the research to the point of understanding which protein in humans EGCG may be binding to and thusly preventing the spread of cancer. Litt used a multipronged approach to predict and then possibly prove the location on a specific protein where EGCG may bind and render the protein non-functional. The predictive approach involved computer software, advanced instrumentation and custom peptide and plasmid synthesis to prove Litt’s hypothesis. The implications of this approach has allowed for an accelerated process to identify potential small drug molecules to treat various diseases.  Also, small molecules that alter the function of RNA may prove that small molecule therapy can be developed for a multitude of diseases. Litt is a former Broadcom MASTERS finalist and two time ISEF (International Science and Engineering Fair) finalist. Litt has already began the next stage of research which will involve genetically varied proteins and testing of how EGCG may bind to the varied protein structures. For more information visit: https://egcg.home.blog