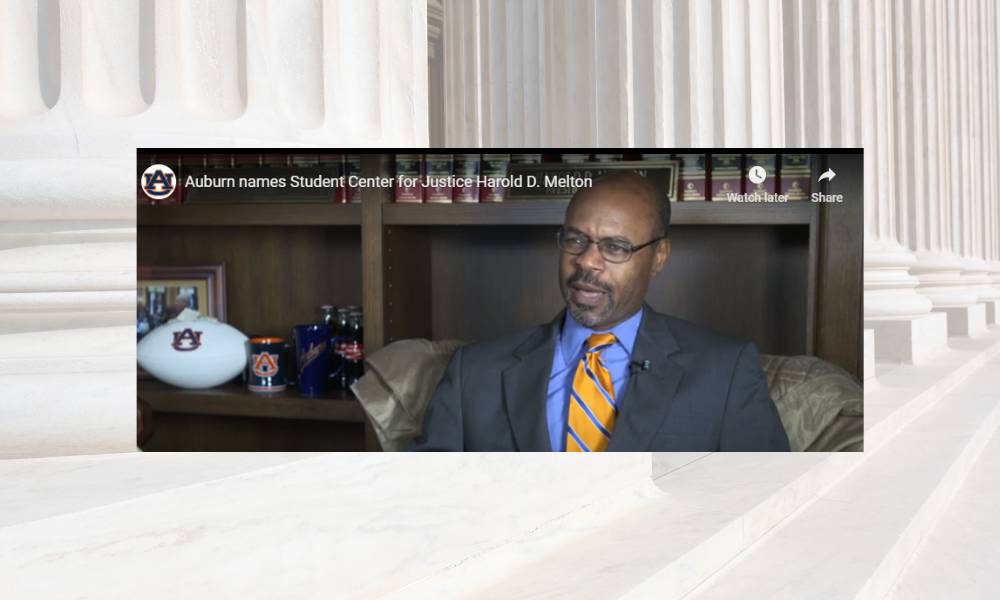 Harold D. Melton was humbled and thankful during his remarks at the official dedication ceremony for the Harold D. Melton Student Center on the Auburn University campus on Friday afternoon.

Melton—the chief justice of the Georgia Supreme Court and first African American president of the Auburn Student Government Association, or SGA—was joined by his wife, Kimberly, parents, Augustus and Carole, and several other family members at the half-hour ceremony. Melton—a 1988 Auburn graduate who studied international business and Spanish—was appreciative while giving remarks in front of the building, which is in the heart of campus near Jordan-Hare Stadium and Haley Center.

“Auburn University owes me nothing, it really doesn’t, and already it has given me all I could ever hope or ask for,” said Melton, who became Auburn SGA president in 1987. “It is a privilege to hear so many great things said about me, many of which I don’t feel like I can even begin to deserve. Thank you to Dr. [Jay] Gogue for his continued leadership of this institution and the members of the Board of Trustees, and special thanks also goes to the Student Government Association itself because this was a student-led initiative.”

“When you show up to school, you don’t know what you’re getting into, you don’t know what’s in store and you hope you made the right decision. I never thought I’d get involved with the SGA or certainly become SGA president, never thought I’d be on the supreme court and never imagined this kind of moment. I thank the Lord for leading me to this place, because it was exactly what I needed for spiritual, educational and social growth, and I’m grateful every day this is where I went.”

Melton, from Marietta, Georgia, went on to graduate from the University of Georgia School of Law in 1991, began serving on the Georgia Supreme Court in 2005 and became its chief justice in 2018. He serves as a board member of the Atlanta Youth Academies and on the national, local and collegiate boards for Young Life Ministries.

Auburn President Jay Gogue lauded the university’s Board of Trustees for voting unanimously in September to name the building in honor of Melton.

“This is a really, really, really great day in the life of Auburn University,” Gogue said. “In 1987, this young kid comes here, gets the whole student body excited, they elect him as student body president and head of the Student Government Association. Then we come to today, and we make real history today. I simply want to say to Chief Justice Melton, you actually honor Auburn by allowing us to honor you today.”

Auburn Board of Trustees member Elizabeth Huntley reflected on the university’s decision to honor the respected Auburn graduate.

“Today, we celebrate the accomplishments of this esteemed trailblazer who has represented Auburn with such distinction and who has led meaningful change toward progress in the way of diversity and equality,” Huntley said. “The naming will forever serve to remind all Auburn students—past, current and future—that with perseverance through adversity and hard work, anything is possible. On behalf of the Auburn University Board of Trustees and as a proud mother, I personally want to thank Chief Justice Melton for continuing to cultivate the next generation of leaders and for setting a foundation that allows our children to not only dream, but to achieve.”

“It’s a privilege to be on this stage with you, and it’s an honor to be part of this moment in time.”

Her daughter, Ada Ruth Huntley, earlier this year became the first African American female to earn the title of SGA president and also spoke at the gathering.

“The Student Center is a cornerstone of the experience of your everyday Auburn student and serves as a safe space for all to gather,” Ada Ruth Huntley said. “This is where student leaders gather to develop their leadership and [work to] leave Auburn better than they found it. You walked so that I could run, and I am incredibly grateful for your contributions to our university.”

“I cannot think of any building more fitting to carry the name of Chief Justice Harold D. Melton.”

Constructed in 2008, the three-level Harold D. Melton Student Center is a favorite gathering spot for Auburn’s more than 30,000 students, complete with dining facilities that include a Chick-fil-A and Starbucks, study areas and the James E. Foy Information Desk. With more than 5,000 visitors each day, the more than 184,000-square-foot Student Center also provides student resources, structured activities, a variety of amenities and houses Student Affairs, The Auburn Plainsman, Greek Life and Auburn Cares offices, among others.

Bobby Woodard, senior vice president for Student Affairs, said naming the building for a former student is the perfect fit.

“It’s hard to imagine a more worthy name for Auburn’s Student Center than Chief Justice Melton’s,” said Woodard, who opened the afternoon’s remarks. “Chief Justice Melton is a walking, talking, living, breathing embodiment of the Auburn Creed, an Auburn man through and through, and I can think of no better way to recognize him than by naming this building in his honor. This beautiful building finally has a name on it, and I am proud to work at the Harold D. Melton Student Center.”

“It will be a lasting testament to all that he has accomplished and all there is to come.”

Melton, who was born in Washington, D.C., offered some sage advice for Auburn’s current student body.

“I would say, first and foremost, get involved, but do more than just get involved,” said Melton, who ended his speech by leading everyone in a War Eagle cheer. “You really have to leave your mark. If you face adversity in any form, push through anyway and don’t get knocked off course. This university has too much to offer for you to not allow yourself to enjoy it all because of a little adversity.”

“Come with the mission to get and to give and be committed to that.”

Naming the student center in Melton’s honor is the first step in the university’s long-term inclusive effort that is headed by Trustees Elizabeth Huntley and James Pratt and the Presidential Task Force for Opportunity and Equity. In addition, the Auburn board in July endorsed a student-led initiative to create a plaza recognizing the legacy of Black Greek organizations and African American culture. The National Pan-Hellenic Council Legacy Plaza will be erected in front of the new Academic Classroom and Laboratory Complex.

“Today’s naming also speaks to the long-term, deliberative work Auburn has committed to in advancing a culture of inclusivity that will serve to further unite our Auburn Family,” Trustee Huntley said. “We continue to make great strides in our family for celebrating people for their character and not the color of their skin. As I look to the future and all this naming represents, I see a bright horizon of hope—a signal to all in the Auburn Family, especially our students, that at Auburn we’re truly are a family united in purpose and devoted to the ideals of the Auburn Creed.”