UGA STUDY: One in nine jobs across state related to Savannah, Brunswick ports 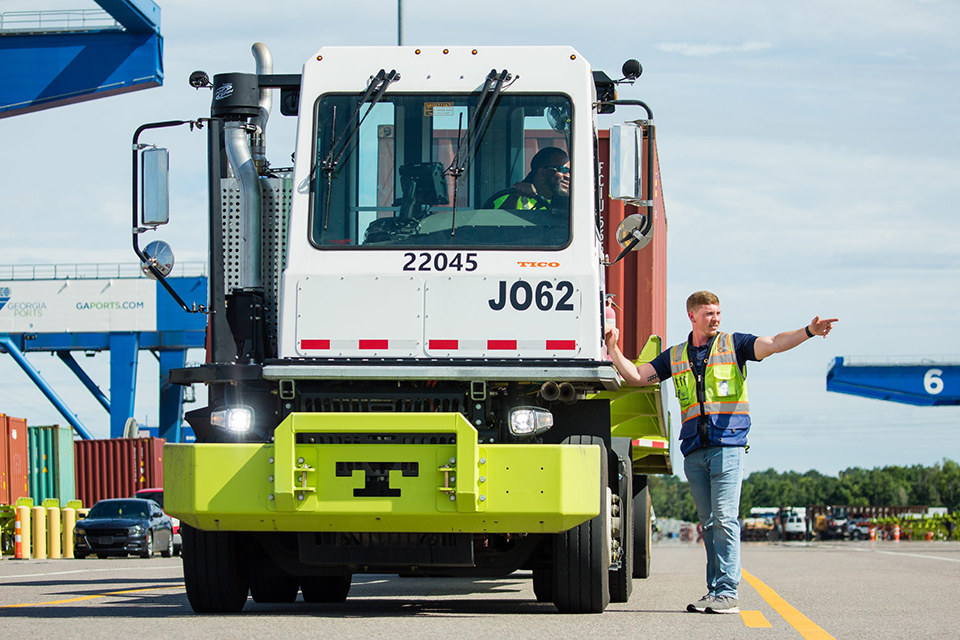 According to the latest study by the Selig Center for Economic Growth at UGA’s Terry College of Business, Georgia ports now account for 11 percent of total state employment. The number of Georgia jobs that rely on port activity has grown by 13 percent since the previous study. (Hunter McRae / Georgia Ports Authority)

Port activity in Georgia now supports 561,000 full- and part-time jobs across the Peach State, according to an economic impact study by the University of Georgia’s Terry College of Business. That number is up from 496,700 jobs during Fiscal Year 2019, the period covered by the last study.

“Our deepwater ports in Savannah and Brunswick are powerfully fulfilling their commission to drive economic development across the state of Georgia,” said Gov. Brian Kemp. “Beyond our marine terminals, the Georgia Ports Authority supports global commerce in farming, forestry, manufacturing and retail, benefiting every one of our counties. GPA’s global logistics network is a big reason Georgia is ranked the best state to grow or expand a business.”

According to the latest study, Georgia ports now account for 11 percent of total state employment, or one out of 9 jobs, based on FY2021 numbers.

“The superb performance of Georgia’s ports relative to other ports reflects strong comparative advantages that allowed them to expand their shares of regional and national waterborne cargo traffic,” said Jeff Humphreys, director of the Selig Center for Economic Growth, who conducted the study. “These comparative advantages are the result of a series of strategic expansions over many years.”

Humphreys said other statewide impacts include:

“These economic impacts demonstrate that continued emphasis on imports and exports through Georgia’s deepwater ports translates into jobs, higher incomes, greater production of goods and services, and revenue collections for government,” Humphreys reported. “Port operations help to preserve Georgia’s manufacturing base, and foster growth of the state’s massive logistics, distribution and warehousing cluster.”

“At GPA, our constant focus on improving service and infrastructure means businesses that choose Georgia are assured of our ability to grow along with them,” said GPA Executive Director Griff Lynch. “Our central purpose is to empower entrepreneurs and strengthen industries by providing the most efficient connections to global commerce.”

“Our thriving ports are vital links in the national supply chain, serving tens of thousands of businesses headquartered across the state and nation,” said GPA Board Chairman Joel Wooten. “For Georgia, in particular, they serve as powerful recruitment tools attracting industrial development and good-paying jobs for Georgians.”

The UGA study, “The Economic Impact of Georgia’s Deepwater Ports on Georgia’s Economy in FY 2021” is the latest in a series of similar studies conducted by the Selig Center for Economic Growth. The comprehensive technical report may be viewed here.

Georgia’s deepwater ports and inland barge terminals support more than 561,087 jobs throughout the state annually and contribute $33 billion in income, $140 billion in revenue and $3.8 billion in state and local taxes to Georgia’s economy.

Walking on Eggshells——A monthly column with a “Feel-Good Vibe”

GDOT: Interstate Lane Closure for the I-16 at I-95 Improvement Projects Through October 8

Deprecated: Function related_posts is deprecated since version 5.12.0! Use yarpp_related instead. in /var/app/current/src/wordpress/wp-includes/functions.php on line 5379
Georgia-Based Troy Acoustics to Expand and Invest $40M in Thomas County
Global Agriscience Manufacturer to Invest $35M in Jasper County
Posting....