“Only one year after opening their state-of-the-art facility in Hartwell, Nestlé Purina has decided to reinvest in Georgia and in our people. As a subsidiary of Nestlé, the company joins a long and distinguished list of Swiss businesses that have not only chosen to invest in the state, but have become part of the fabric of their adopted communities,” said GDEcD Comissioner Pat Wilson. 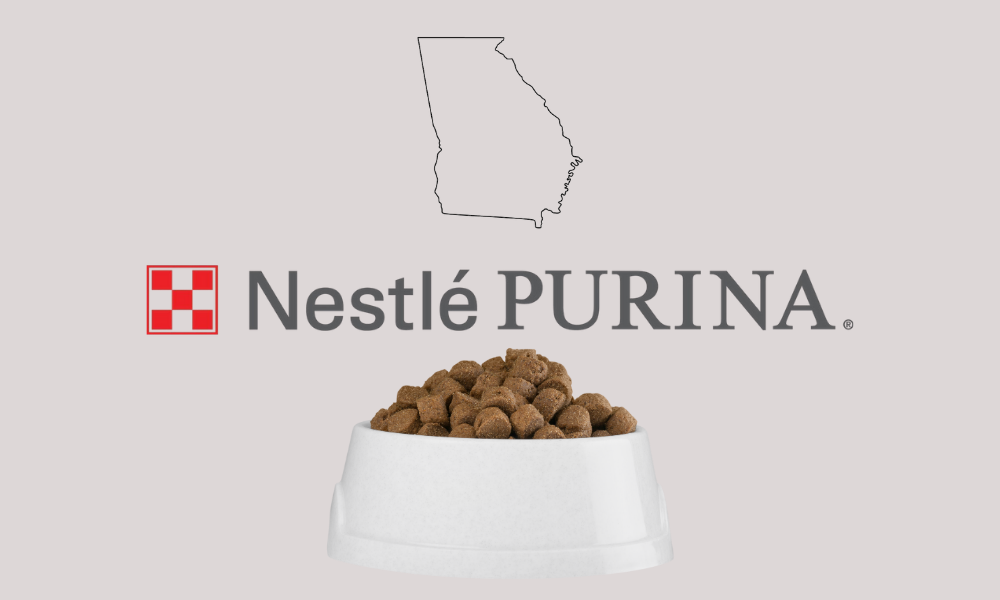 “It’s a pleasure to see a world-renowned company like Nestlé Purina expand their operations in the Peach State,” said Governor Kemp. “Our highly skilled workforce of hardworking Georgians has been critical to attracting new jobs and investment to every corner of the state. I’m excited for what this will mean for Hart County and the surrounding region, and I’m grateful for Nestlé Purina’s continued investment in Georgia.”

In 2017, Purina announced plans to open a wet pet food factory in Hartwell, with a commitment to invest $320 million and employ 240 people by 2023. As a result of growing demand for Purina’s high-quality and nutritious pet care brands, the facility is expanding to add processing, packaging, and warehouse capacity, for a total of $870 million committed to the company’s Hartwell operations. This expansion in Hartwell is part of a broader growth plan for Purina, which also includes new factories recently announced in other U.S. locations. Purina brands feed 49 million dogs and 66 million cats every year, and the Hartwell location produces several of the company’s flagship brands, including Fancy Feast.

“Purina is thrilled to be expanding our operations in Hartwell,” said Purina Factory Manager Winston Silva. “Through this investment, we will continue delivering the science-based nutrition pet lovers have come to trust for more than 90 years, with a continued commitment to safety and sustainability in our operations. We’re proud to be a part of the Hartwell community and look forward to expanding our Purina family while also continuing to make a positive impact for pets and people in Northeast Georgia.”

With this expansion, Purina now expects to employ up to 370 people at its Hartwell facility by the end of 2025. Purina also currently employs more than 400 people at its dry pet food factory in Fairburn, Georgia. New jobs in Hartwell will include positions in manufacturing and assembly from the associate level through management opportunities.

“The announcement by Nestlé Purina to expand operations in Hart County is exciting news for our community as well as the region,” said Hart County Industrial Building Authority Chairman Bill Leard. “The company not only provides excellent career opportunities, but also has significant involvement in the local community.”

Purina is committed to the community and supports local pet shelters and rescue efforts as well as education and hunger relief programs, along with supporting other initiatives. Purina also donated $20,000 to the Northeast Georgia Council on Domestic Violence (NGCDV) as part of its Purple Leash Project, a partnership between Purina and national nonprofit RedRover, to renovate the shelter’s pet-friendly features.

“Only one year after opening their state-of-the-art facility in Hartwell, Nestlé Purina has decided to reinvest in Georgia and in our people. As a subsidiary of Nestlé, the company joins a long and distinguished list of Swiss businesses that have not only chosen to invest in the state, but have become part of the fabric of their adopted communities,” said GDEcD Comissioner Pat Wilson. “As a native of northeast Georgia, this project is especially gratifying, and I want to thank Nestlé Purina for choosing to grow in Hartwell. Additionally, many thanks to Dwayne Dye and our economic development partners in Hart County for helping us win this project.”