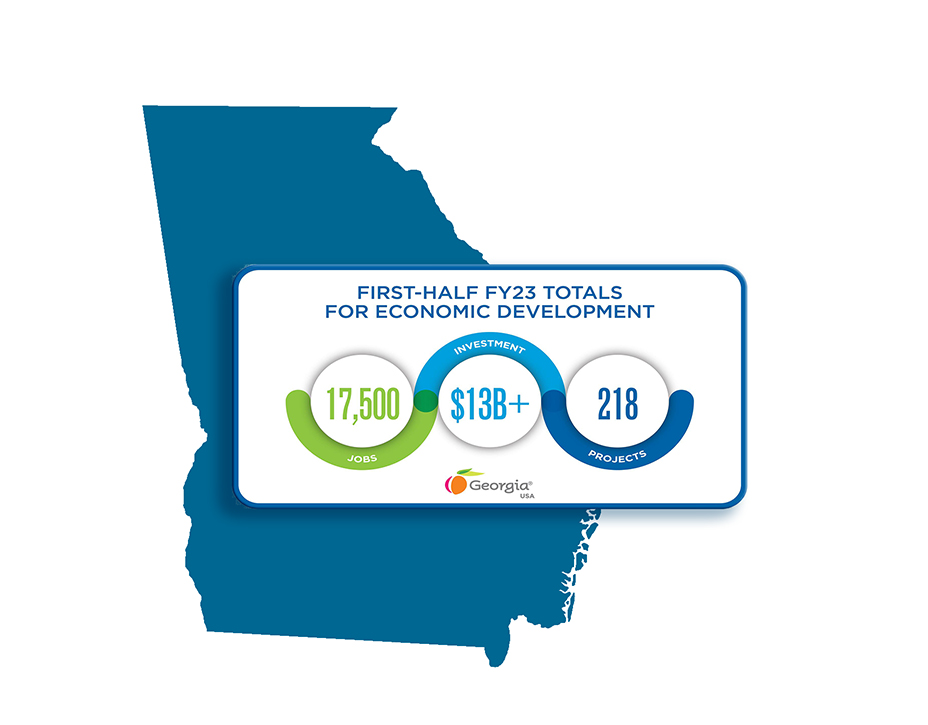 Governor Brian Kemp and the Georgia Department of Economic Development announced today that key industries in Georgia have sustained momentum for the state’s economic development:

“Georgia is the best place to live, work, and raise a family, and that starts with good jobs,” said Governor Brian Kemp. “These latest figures from the nation’s top-ranked Department of Economic Development show that job creators know the Peach State has what they need for success. As they continue to bring unprecedented levels of opportunity to communities in every zip code of our state, I want to thank the economic developers on both the local and state levels, as well as our partners in the General Assembly, for making Georgia a place where everyone can thrive.”

“Decades of experience in listening to companies and working alongside them to solve challenges that bolster goals for long-term success make Georgia a best bet for business. Proven solutions such as our best-in-class job training program Georgia Quick Start and our GRAD certified sites that support accelerated project timelines speak directly to the most important hurdles many companies face today,” said GDEcD Commissioner Pat Wilson. “Beyond that, Georgia is combining the resources and talent of local, state, and international partners to drive innovation and create meaningful economic impact. We are thankful to all of our partners for their continued efforts to support statewide job creation. Our collaborative spirit in economic development makes Georgia unique and is vital to success in our communities.”

The automotive industry was the second-largest source of new jobs and investment, after advanced manufacturing. In October, state and local officials joined company representatives, including Korean Ambassador to the U.S. Tae-yong Cho, for the groundbreaking of the new Hyundai Motor Group Metaplant America (HMGMA) EV facility, which will support more than 8,100 direct jobs in Bryan, Bulloch, Chatham and Effingham Counties. Three off-site HMGMA suppliers announced locations following HMGMA’s groundbreaking, swiftly surpassing the initial $1 billion in investment predicted to come from such additions.

International companies have been valued partners in creating a closed-loop electric mobility supply chain and accounted for 23 percent of state projects since July 1, 2022. Historic project examples include the partnership between SK On and Hyundai Motor Group in Bartow County and the next-generation developer FREYR Battery’s Coweta County facility. Both are in the top five largest projects by investment in the state’s history. Battery recyclers Sung-Il Hitech and Denkai America also joined Georgia’s growing electric mobility ecosystem.

Communities throughout Georgia’s middle and coastal regions continued to benefit from advanced manufacturing, a cornerstone industry sector in the state. Major investments or expansions announced thus far in FY 2023 include YKK AP in Macon and Beretta Holding S.A.’s new facility in Bryan County through its subsidiary Norma Precision Inc. This leading job-growth sector has announced more than 7,700 new jobs in the state since July 1, 2022. Additionally, Germany-based Haering Precision celebrated the grand opening of its Lavonia facility in November with a two-day event, including a “Future Day” for approximately 400 local high school students and members of the community.

Supported by the state’s agricultural strength and notable logistics and distribution capabilities, the food processing industry continued to choose Georgia for growth. Companies in this field announced more than $695 million in investments, largely through expansions. King’s Hawaiian®, a Georgia partner for more than a decade, announced another expansion of its Oakwood facility, marking its second expansion in less than a year.

“Companies that come to Georgia are connected with partners in the community and the state to solve workforce challenges, which is one reason why they choose to grow in Georgia again and again,” said GDEcD Deputy Commissioner for Global Commerce Kristi Brigman. “By working with the Georgia Quick Start program and letting students see the jobs of tomorrow in-person, companies can build the talent and workforce they need from the ground up. These programs help Georgians upskill, including those who are part of Georgia’s strong inbound domestic migration trends.”

Two industries with rapidly growing footprints in Georgia — life sciences and film — also welcomed additional facilities that will support industry breakthroughs and learning opportunities for students. Georgia Tech hosted a groundbreaking for its Science Square purpose-built district in August, and The Rowen Foundation’s 2,000-acre science and learning campus broke ground in early December. Athena Studios announced it will add an additional 350,000 square feet to its Athens facility, which includes a structure dedicated to training the local workforce through a partnership with the University of Georgia and Georgia Film Academy. At the former Fort Gillem outside of Atlanta, BlueStar Studios announced more than 600,000 square feet of new stage space, as well as an additional 45,000 square feet dedicated to technical resources and amenities, which will include refurbished buildings that preserve the base’s historic architecture.

About GDEcD
The Georgia Department of Economic Development is the state’s sales and marketing arm, the lead agency for attracting new business investment, encouraging the expansion of existing industry and small businesses, locating new markets for Georgia products, attracting tourists to Georgia, and promoting the state as a destination for arts and location for film, music, and digital entertainment projects, as well as planning and mobilizing state resources for economic development. Visit www.georgia.org for more information.