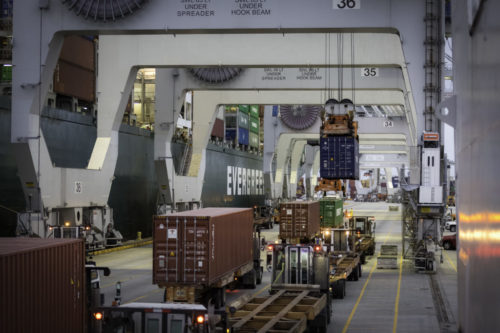 “We’re seeing an early and strong start to peak season at the Port of Savannah,” said GPA Executive Director Griff Lynch. “In addition to expanding trade on our regular weekly services, shipping lines are adding calls by sweeper ships to meet rising demand.”

“At GPA, we’re making a call to action for private developers to enter or expand in this very active market,” said GPA Board Chairman Will McKnight. “Within a 30-mile radius of the Port of Savannah, there are more than 20,000 acres of industrial park space ready for development.”

Over the past two years, property that the Georgia Ports Authority put on the market within its Savannah River International Trade Park has been developed, adding 5 million square feet of distribution space for companies such as Shaw, Safavia, Wayfair and others. At its September meeting, the GPA Board approved $3.75 million in road improvement projects to avoid truck congestion at the trade park.

In April, California-based Plastic Express, in conjunction with Capital Development Partners, announced plans to invest $172 million in a new 2.4 million square-foot Savannah facility. The first phase of the rail-served location is scheduled to open for operation in November.

To better accommodate the growth in cargo crossing Garden City Terminal docks, the Authority is making port improvements, such as: