All 1,485 major modules from 25 suppliers around the globe have now been manufactured and safely delivered. 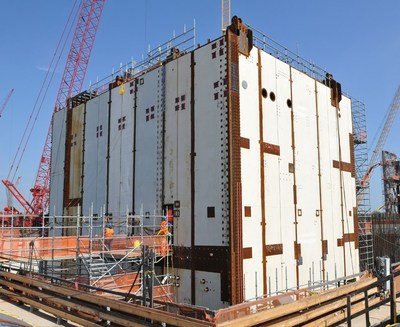 All 1,485 major modules from 25 suppliers around the globe have now been manufactured and safely delivered

The final major module for construction of the Vogtle 3 & 4 units has arrived onsite, meaning all 1,485 major modules required to complete construction have now been manufactured and safely delivered. The arrival of the final major module marks the completion of sourcing construction modules from 25 suppliers and vendors from around the globe. These modules help streamline the construction process, since they are made in advance of arriving to the project site and ready to be assembled into larger components that make up the nuclear units.

Since 2011, major modules have been delivered to the site by rail and truck and include a range of plant components such as floor and wall sections and supporting structures that surround the containment buildings and reactor vessels. Some of these modules have become what are now the containment structures and a 20-room building housing critical components for the units, amongst other sections of the units. (View photos of two large modules onsite here.)

In addition, several milestones for Unit 4 have recently been achieved including the second of four concrete placements for the operating deck inside the containment vessel. The placement of 58 cubic yards of concrete forms a 2-foot-thick floor in support of the loading and staging of equipment inside containment in preparation for the third containment ring and top head placements. To date, more than 667,000 cubic yards of concrete have been placed for units 3 & 4, enough to build a sidewalk from Miami to Seattle.

Workers recently set the Integrated Head Package (IHP) on its stand on the operating deck inside the Unit 4 containment vessel. Weighing 475,000 pounds, standing 48 feet tall, and containing more than three miles of electrical cables, the IHP will sit atop the reactor vessel during normal operations and is the integral piece used in monitoring and controlling the nuclear reaction that will occur.

The project workforce remains at an all-time high with approximately 8,000 workers on site. With more than 800 permanent jobs available once the units begin operating, Vogtle 3 & 4 is currently the largest jobs-producing construction project in the state of Georgia.