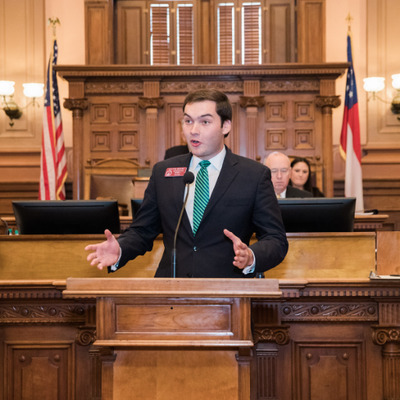 The following article is an opinion piece and reflects the views of only the author and not those of AllOnGeorgia. It has been provided by Colton Moore, State Senate Candidate.

The demise of fair and free elections is the end of any democratic nation. Our constitutional right to NO taxation without representation is under attack.  A lack of election integrity results in the elite determining the outcome of elections, placing favored individuals in power.

Two years ago in Georgia, the presidential election was fraught with errors. There was blatant vote dumping, unexplainable pausing and restarting of vote counting, delayed reporting of election results, and refusal to recount votes in a timely fashion.

I took action on behalf of Georgians who were outraged over the derelictions of duty by Georgia’s election officials. As outlined in the Georgia State Constitution, in the event of an uncertain election outcome, the decision of how Georgia will vote is turned over to the legislature. After seventeen days of chaos, following the still undecided Presidential election, I was the first in the country to speak out and demand that Georgia legislators immediately convene at the capitol to address the emergency at hand. My motion was denied by Georgia leadership, whom I believe was motivated to cover up election fraud for personal reasons. As expected, eventual audits confirmed an incorrect vote count in four Georgia counties.

Fraud in the Georgia elections has been an ongoing issue. After the debacle on November 3, 2020, if Georgia leadership acknowledged gross negligence and mishandling of the presidential election, it would jeopardize their political career and hurt members of their party in the upcoming Georgia senate elections. Fraud of this magnitude, by powerful Georgia leadership, is likely responsible for turning a notoriously red state blue.

Citizens feel they can no longer trust the government to do the right thing. They feel that politicians have become self-serving dictators who pass inexhaustible laws for Georgia citizens, while holding themselves to a vastly different standard.

One Georgian reached out to me and demonstrated that of her extended family with seven eligible voters in Fulton County, only two had their vote recorded on the Secretary of State’s website. When she guided other Georgians to check if their vote was recorded, she discovered the extensive database of votes was inexplicitly missing.

Georgia Secretary of State Brad Raffensperger is currently the defendant in an election integrity lawsuit, where the plaintiff demands the replacement of Georgia’s Dominion Voting Machines.

Alex Halderman, a computer science professor at the University of Michigan proved that Dominion voting machine software can be manipulated by poll workers or hacked online, by changing QR codes on the paper ballot which is scanned. Since a QR code isn’t discernible to the human eye, voters have no way of knowing whether the QR code matches the printed text of their choices.

In response to the lawsuit, Raffensperger has still not read a report that contains information about problems with Georgia’s voting machines and overall election security. Even though at first glance this seems strange, it reasons, one can’t be blamed for what they don’t know. This is the type of conduct, as well as, withholding pertinent information for “security purposes”, that allows government officials to delay or keep their fraudulent actions from going public.

I believe it is the responsibility of every legislator to attempt to fix this system where government leaders avoid taking responsibility, make excuses for their lack of transparency, and live above the law. Currently, Raffensperger is vague at best about what steps are being taken to prevent physical tampering with Dominion Voting Machines, and what steps are being taken to ensure that Dominion Voting Machine software is tamper-proof, even by an attacker who uses election management system computers.

For this reason, I am in favor of abandoning Dominion Voting Machines. Georgians, we must get back to a simple, handwritten record of one’s vote, which cannot be altered electronically. The current leadership will resist this critical step of acquiring a new voting system/ equipment, in order to save face and avoid the enormous expenditure, but, given what is at stake, it is worth the investment in Georgia’s future.

In addition to replacing Dominion Voting Machines in favor of handwritten ballots with no QR code, I am in favor of: