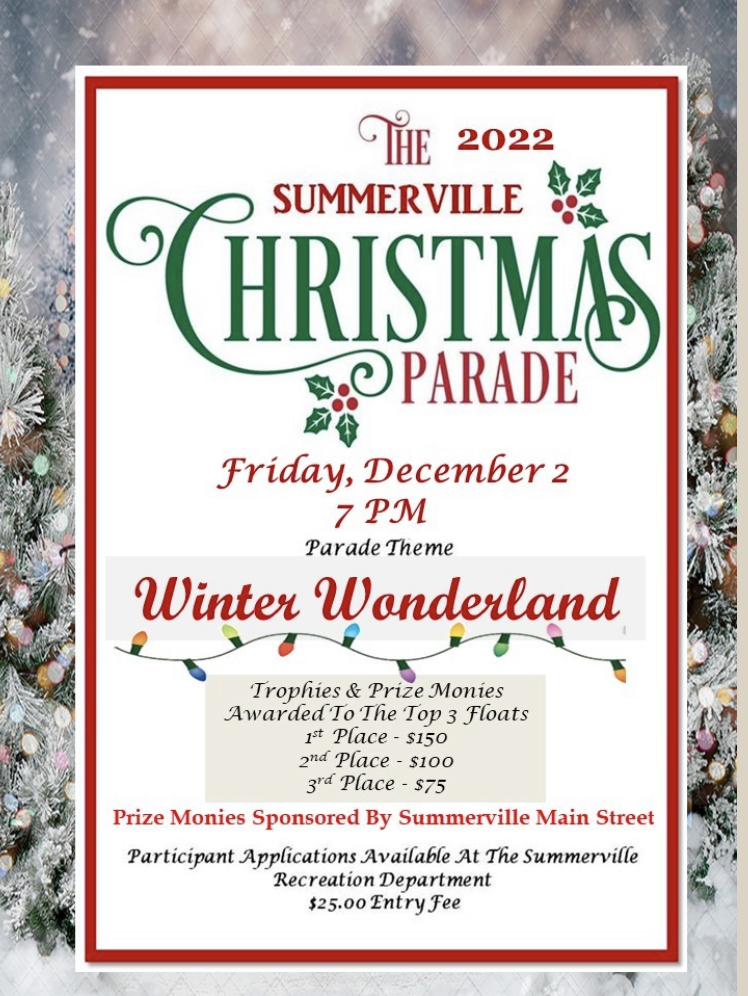 The City of Summerville is gearing up for the 2022 Christmas Parade, to be held this Friday, December 2, at 7:00 p.m. This year’s parade theme is “Winter Wonderland”. Summerville Main Street will present live musical entertainment featuring Charlie Long in front of the Chattooga County Courthouse beginning at 5:30 p.m. until the start of the parade. Downtown businesses and restaurants invite the public to shop and enjoy a meal before or after the parade.

The 2022 Parade Grand Marshall is the beloved Lloyd D.“Buddy” Windle, III. Coach Windle attended the Mars Hill College in North Carolina from 1959 to 1963. He was a four-year starter in football from 1959-1963.Team Captain in 1960,1962, & 1963. He led the Mars College to a conference championship in 1959.All-Conference in 1959 & 60. He was noted as the Most Valuable Back in 1959-60 and 1962-63. MVP in 1960, 62-63 and member of the M-Club for four years. Outstanding PE major in 1963 and member of the track team in 1962. Coach “Buddy” Windle was inducted into the Mars Hill College Hall of Fame in 2003. He began his teaching and coaching career in 1964 at Erwin High School in East Tennessee, and then came to Chattooga County to teach and coach at Summerville Jr. High from 1965- 1968. He was assistant coach in his hometown of Louden, Tennessee in 1969 when the Loudon Redskins won the State Championship. Coach Windle began his coaching career at Chattooga High School in 1972 as Head Coach for a total of 11 years and was honored by having the high school football field named after him in 1997. He was honored by being inducted into the Chattooga High School Hall of Fame in 2008. Coach Windle is loved and respected by many and has also served his community as a Summerville City Councilman for 12 years from 2008-2019. It is an honor to have him as the 2022 City of Summerville Parade Grand Marshall.

Lighting of the Courthouse Tree

Santa will do the honors of lighting the tree that is displayed in front of the Chattooga County Courthouse as he makes his way through town in the parade. His sleigh and reindeer will make a quick pause in front of the Courthouse as he works his magic to light the tree, wish all a Merry Christmas, and continue through the parade route. Spectators young and young at heart will enjoy this special lighting of the tree.

6:30 PM – Horses should be lined up at Tennis Court Area.

​      All horse trailers to park at AGL parking lot