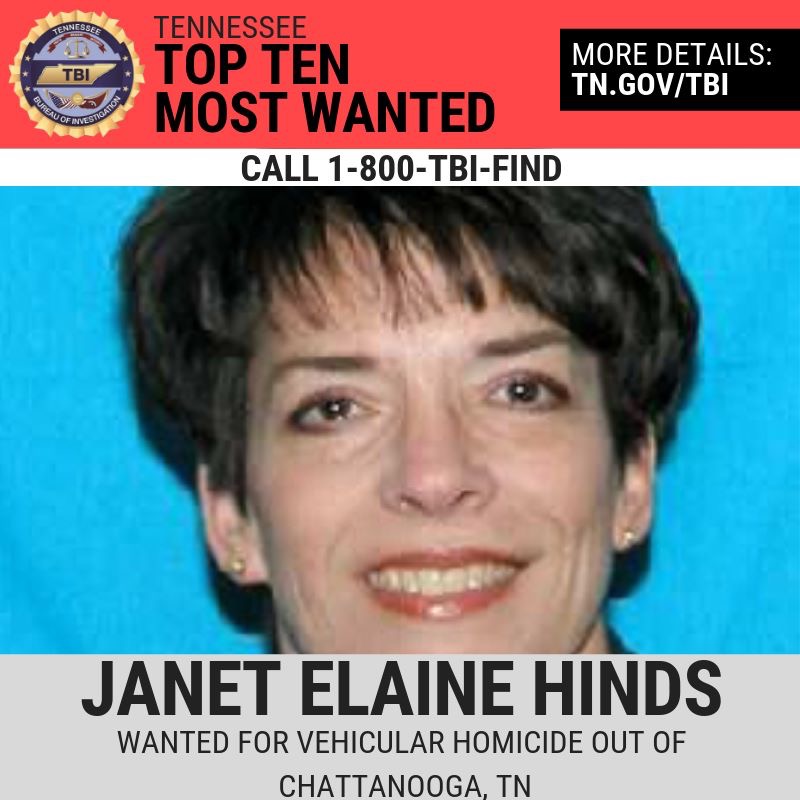 The Tennessee Bureau of Investigation has named the suspect in the hit and run that killed a Chattanooga Police Officer.

Janet Hinds has been added to the TBI’s Ten Most Wanted list. She’s wanted for vehicular homicide in connection to the death of Chattanooga Police Officer Nicholas Galinger.

TOP TEN ALERT: 54-year-old Janet Elaine Hinds has been added to the TBI Top Ten Most Wanted list. She’s wanted by the Tennessee Bureau of Investigation and the Chattanooga Police Department on a charge of vehicular homicide in connection to the death of Officer Nicholas Galinger. Please call the Chattanooga Police Department at 423-698-2525 or the TBI at 1-800-TBI-FIND with information concerning her whereabouts.

Officer Nicholas Galinger was hit on Hamill Road while he was inspecting a manhole cover that had water flowing from it.

Galinger was transported to a local hospital in critical condition where he later died.

Officer Galinger was 38 years old and graduated from the police academy in January.

Chattanooga Police Chief David Roddy says the community “lost not just an officer. We lost a son, a father, a friend, and a protector.”

Hinds is facing charges of vehicular homicide. A $2,500 reward is being offered for information leading to her arrest.

Anyone with information is asked to call the TBI at 1-800-TBI-FIND.