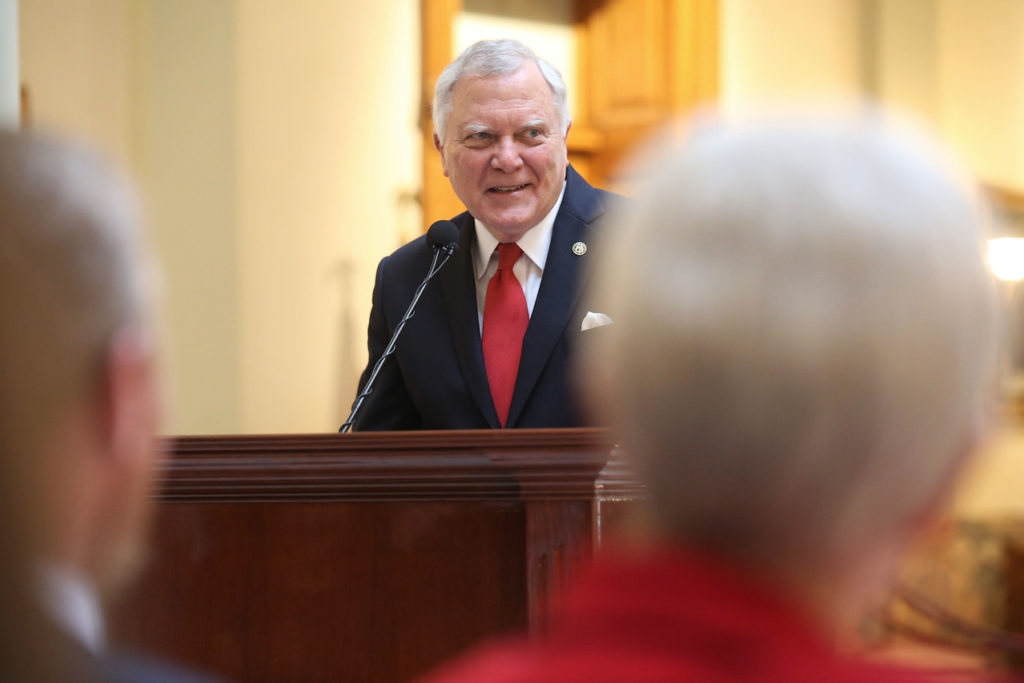 Governor Nathan Deal is making his first visit to Chattooga County today to speak at a combined meeting of the Optimist and Rotary Clubs at noon at Sweet P’s in Trion.

The public is invited to attend, but there is limited seating. Tickets are $25 and can be purchased from Rotary Club President Sylvia Lee Keziah, 706-857-4033.

While in town, Deal is expected to make a stop on the Chattooga River near Mount Vernon Mills to inspect the stretch of the river that has been recommended by the Georgia Soil and Water Conservation Commission for flood control improvements. In spite of a resume that does not include soil or water conservation experience, Deal appointed sole commissioner Jason Winters to the GSWCC in April 2015. The improvements that have been mentioned include new levees and the improvement of the current levees. The recommendations will be discussed during the new legislative session that begins in January.

Deal was elected to the U.S. House of Representatives as a Democrat in 1992, but switched to the Republican Party in 1995. On March 1, 2010, Deal announced his resignation from Congress to run for governor of Georgia. This will mark the Governor’s first trip to Chattooga County.

A second-term governor with no further political ambitions, Deal ruffled the feathers of many conservatives in the Republican party with his vetoes of the religious freedom and campus carry bills. He has more freedom to continue defy his party’s base and has set his second term goals on revolutionizing the education system.

Deal’s first step in education reform appears on the November 8th ballot as a question poised to voters that reads “Shall the Constitution of Georgia be amended to allow the state to intervene in chronically failing public schools in order to improve student performance?”

Sentenced to Failure: Chattooga County’s Jail Lingers in the Past
“A Deal With the Devil”
Posting....