‘Her Name was Hester,’ follows Stacie Marshall as she moves back to her ancestral farm in Dirt Town Valley. Marshall wrestles with the reality of her farm having held enslaved humans and must find a way to make amends. 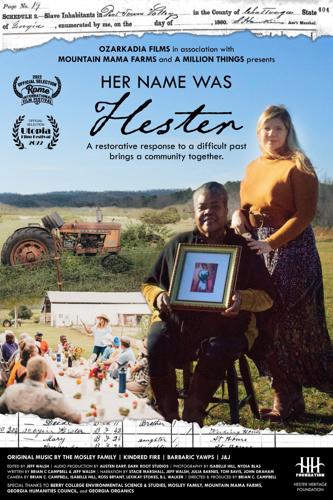 The Rome International Film Festival will be hosting the international premiere screening of the documentary ‘Her Name was Hester’ on RIFF’s opening night at the DeSoto Theatre.

On Nov. 10 at 6 p.m. there will be a red carpet walk for the media to interview the film’s subjects and filmmakers followed by the screening at 7 p.m. After the screening there will be a Q&A panel with the filmmakers and some of the family including: Brian Campbell, Stacie Marshall, members of the Mosley Family (the family featured in the film), Kim Severson (Pulitzer Prize winning NY Times journalist), Haley Smith, Austen Earp, Jeff Walsh, Matthew Raiford (Farmer/Chef) concerning the creation of the film; followed by a brief musical performance by members of the Mosley family who performed songs for the film.

On Nov. 12 at 10 a.m. there will be a civic dialogue about restorative healing in communities inspired by the film which will be moderated and led by Haley Smith, Director of Diversity and Inclusion at Berry College. The location will be announced in the coming weeks and breakfast will be provided.

‘Her Name was Hester,’ follows Stacie Marshall as she moves back to her ancestral farm in Dirt Town Valley. Marshall wrestles with the reality of her farm having held enslaved humans and must find a way to make amends.

In this process of reconciliation and filming, she is approached by a New York Times National Food Correspondent, who joins in the documentation of the story and it ends up on the cover of the New York Times July 4, 2021. A story passed down within Marshall’s family about an enslaved woman, Hester, who served as a wet nurse to her ancestors and was eventually buried among them prompts Marshall to engage in genealogical research and reconciliation efforts with her neighbors. Along the way, with the counsel and collaboration of her neighbors and trusted mentors, Betty and Melvin Mosley, Marshall makes a surprising and emotional discovery that will change the community forever.

We are excited to announce ‘Her Name was Hester’ is our screening for the opening night of the festival and emphasizes the importance of RIFF’s commitment to DE&I,” said RIFF Executive/Co-Creative Director Seth Ingram. “Georgia Power is our main sponsor for DE&I initiatives this year which makes the film a perfect fit for the opening night.”